Those nine years must have been something. And who cares if it was almost 160 years ago – those nine glorious years when Texas was a republic have remained a mark on the land and a source of pride for the people who live here.

It’s easy to see why.
Consider Johnson City: located off to the side of the interstate and hidden by a landscape of peach trees, Johnson City is a quiet and retiring place – barely a city, really, yet exactly the kind of place that would rear a President and tell you that no sir, the city is actually not named for LBJ – but his grandfather. That’s Texas. Homegrown, tall and tough – and in case you forgot, the only State in the Union that used to be a Republic. And sure, they may only be a state now, but the current President is a friend and they sure can pick a poser out of the crowd. Which is why import automakers come here when they want to see if their trucks make the grade. This is truck country, and if you can build one that beats the bush in West Texas, why, maybe you’re on the edge of doing some serious business with cowboys.

If that’s the case, better saddle up Nissan and their little upstart Frontier truck. The 2005 Nissan Frontier is a rock solid truck that handles highway and washed-out ravines with pluck, a truck with power and poise that’s destined to compete with the Toyota Tacoma and Dodge Dakota for its share of the mid-size territory.

First introduced three years ago, the Frontier draws its genealogy from the Hardbodies of the eighties, at least up until now. Now it’s based on the same F-Alpha platform as the full-size Titan, Pathfinder and upcoming Xterra, which a strong step forward and in between compact and full-size – the place where most serious competitors in the smaller truck segment seem to be playing today. This ain’t your Daddy’s Chevy Luv – in fact, it’s more a mini-Titan, a big, beefy truck that can haul, tow, go off-road and do all the things a full-size must do, in a more compact and urban-friendly size. It’s more than 9 inches longer than the previous version, much more powerful and designed for rugged travel, thanks to the fully boxed frame and fixed axle rear. It’s so much different, in fact, that there really is no point to comparing it to the 2004 Nissan Frontier.

Another difference between old and new Frontier is choice. For the 2005 model, discount choices are limited. There’s no regular cab truck, and some of the featured equipment – UtiliTrack in the back and 265 horses up front – aren’t available on the base King cab. The missing regular cab choice probably will amount to wishing down a well – market trends indicate that regular cabs have been in steady retreat to Clubs, Kings, and Crew models, and aren’t likely to be missed. The Frontier is offered in King Cab and Crew Cab styles, and with a choice of Nissan’s new 4.0-liter V6, rated at 265 horsepower and 284 lb ft. of torque, or a 2.5-liter inline 4-cylinder engine available in the base King 4x2 model, and rated at 154 horsepower and 173 lbs. ft of torque. Frontier shoppers will also get their choice of 2-wheel or 4-wheel drive, including available 4-wheel limited slip. Nissan’s spray-on bed liner and UtiliTrack system is available on all trims except for the King XE and SE models. Also available is a tube-style roof rack for Crew Cab models. The Frontier comes with either 5-speed electronically controlled automatic transmission or 6-speed manual transmission. The Frontier is equipped with 17-inch wheels, an all-steel double-wishbone front suspension, a solid axle leaf rear suspension, available off-road tuned Bilstein® high-pressure performance gas shocks, power-assisted rack-and-pinion steering, and 4-wheel disc brakes with ABS. Interior features include most of the perks American drivers demand, such as power-adjustable seats, heated seats and mirrors, and flip up rear seats for the King models. Standard safety equipment includes dual stage front air bags, 3-point seatbelts and LATCH (Lower Anchors and Tethers for CHildren) child seat anchor system. Optional safety equipment includes side and curtain air bags, and VDC – Vehicle Dynamic Control for Nissan vehicles, otherwise known as stability control. Vehicle Dynamic Control is not available on the King style 4x2 XE, SE and LE models. Off road features include shift on-the-fly, 4-wheel limited slip, electronic locking rear differential, Hill Descent Control (HDC) and Hill Start Assist (HSA).

You don’t come to Texas and sell a tin truck with a puny engine. You bring the grunt and sell it like a man, stand it up and let the metal do the talking – which is where Nissan is at with the 2005 Frontier. In this case, what the metal says is that those used to grinding away in the old Frontier will want to shout with glee when they drive the 2005 model. The 265 horsepower engine, a modified 4.0-liter VQ engine built in Decherd, Tennessee, puts out 284 lb. ft. of torque at 4,000 rpm, right in the neighborhood where trucks need it most. On the flatland of Texas, the Frontier galloped along highway like a gazelle and was quite at ease in bumper-to-bumper traffic situations. The speed sensitive rack and pinion system surely had something to do with this, and the engine is, frankly, a gem -- and is the same one used to power such cars as the 350Z, Maxima, Altima, Murano and Quest, though tuned for truck use and bored out for more power. Nissan claims that it is the most powerful engine in the mid-size segment – it beats the Tacoma by 20 horsepower -- and it’s not a stretch to claim that this is flat out the best engine. Towing capacity is 6,500 lbs for all but the four-cylinder model, which comes in at 3,500 lbs. Just as important, however, is that the engine is mated well to a five-speed automatic or six-speed manual that manages that power well, and provides a nice, steady ride. According to Nissan numbers, gas mileage should range from a high of 22/25 for the base King 4x2 XE to a low of 17/21 for a Crew 4x4 SE, which matches up pretty well to the Toyota Tacoma. Real-world gas mileage should be less.

Who cares about things like gas mileage and comfort when you’ve got a boulder to climb or a wash to run – especially in an off-road vehicle as adept at articulation and climbing as the Frontier. On a thirty-minute course of rocks, ravines, steep climbs and sudden descents, the Frontier stayed in control, thanks to the F-Alpha frame, exceptional Bilstein off-road shocks and features such as Hill Descent Control – which controls engine braking and keeps the vehicle at a steady 5-7 mph while in steep descent, with no brakes, an electronic locking rear differential and remarkable undercarriage clearance. When it came to proving the Frontier’s off-road capability, Nissan reps did not back away from the challenge, picking a rocky and challenging course that revealed the nature of its capability. The Frontier handled it all with impressive dexterity.
Page 5: Interior

The interior is also much improved, thanks mostly to the size of the 2005 Frontier, which is longer, wider and higher than the previous version. It should come in second to the Dakota in terms of size in the segment, and when compared to the Toyota Tacoma, the 2005 Frontier is slightly larger in almost all critical areas -- with about 2 inches more in hip room. Those two inches make a difference, as the Frontier is a very comfortable ride. Doors, front and back, are large and easy to handle, and close with a reassuring thunk. The interior is hardy and should handle rough treatment well, though road noise control could be improved. Seats are built with good, quality materials and configurations include flip-up back seats for storage and fold-flat front passenger seats on all but leather-trimmed models. For Crew models, there’s plenty of legroom, though King cabs look a bit tight in back. Instrument controls work well and everything is where it should be – once again, think mini-Titan and you’ll get a good picture of the interior setup. Plastics are typically top grade, with a modern feel to the seat and headliner fabric. Unlike the Tacoma and the Dakota, vent flaps don’t close flat, which would have been a nice touch. The Frontier does, however, offer a flip-up glove box, which came in handy and will prove to be a valuable addition to the interior functionality of the vehicle.
Page 6: Bed

Interior functionality is good, and of course quite important, but lately a truck’s bed is increasingly becoming the place where functionality is most important of all. It’s no longer just toss in a load and go – thanks to the Titan, Tacoma and the 2004 F-150, tie downs have reached rocket science levels, with tracks and clamps holding all manner of equipment and cargo. The Frontier is no different than the Titan in this regard, and in fact offers the same UtiliTrack system, a great tie-down scheme that will hold about anything from cruise missiles to motorcycles. It works through five "C" cross-section rails mounted in the bed and with removable utility cleats that slide into the channels, providing a wide range of attaching points for securing cargo. Tacoma also has a track system – though the clips and clamps seem a touch less substantial than the Frontier’s weightier offering.
Page 7: Wrap

The Frontier is indeed a weighty offering – from its big class-leading engine to its comfortable interior, functional bed, off-road capability and styling. The styling is close to the Titan in look – starting from the grille and sweeping along the aggressive stance, tough fenders and clearance. Despite that, however, the 2005 Frontier is possibly the least aggressive of the Big Three mid-size trucks – and many have walked away from the Tacoma and the Dakota with the opinion than macho was a bit overworked. As long as the Frontier comes in Screaming Yellow, however, those who wish to make a statement with their truck will be happy, and for the rest of us – those who don’t wish to look like a cartoon – the Frontier is a mellower, mature offering. All in all, the Frontier plows new ground in the mid-size truck market, and in the process covers up such rusty offerings as the Ford Ranger and weak competitors like the Chevrolet Colorado. The 2005 Nissan Frontier matches up well with – and maybe goes one better than -- class leaders Tacoma and Dakota, especially when it comes to the things trucks should always do: provide low-end power, towing capability, off-road prowess and an interior that is car-like in its functionality and comfort. Where the Frontier falls short is in a few small but critical areas: no standard stability control, and none at all for the least expensive trims, and the overall dearth of featured equipment down on the discount side. King Cab XE 4x2 owners get little of what makes the Frontier such a great truck: no chrome front bumper, no UtiliTrack or spray-on liner, no lumbar support or vehicle control, no power anything.

For a truck based on power, it’s a shame that Nissan can’t power share a little to the lower-cost models. Outfitted as it should be, however, the Frontier will do some consider able damage to other trucks vying for sales. It has the engine, interior refinement and off-road capability to tug and toss the mid-size truck segment all over the Texas bush.

How does the 2005 Nissan Frontier match up with the Tacoma? It’s close – very close. The Frontier has a more powerful engine, has greater interior space and looks more mature. The Tacoma will likely offer more configurations. It will probably come down to personal preference, price and equipment.

What’s the towing capacity? The 2005 Nissan Frontier, with the V6 engine, is rated at 6,500 lbs. When properly equipped.

Is there a regular cab version available? No. The 2005 Nissan Frontier comes in King and Crew cab configurations. 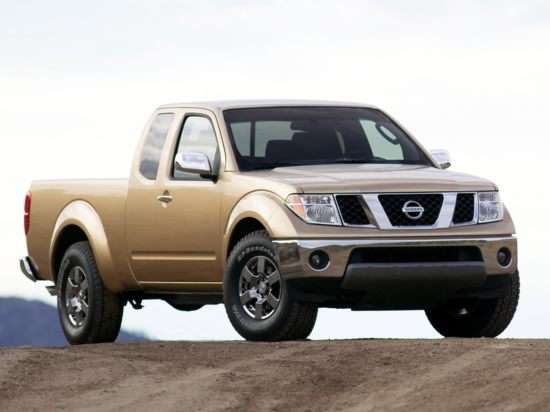