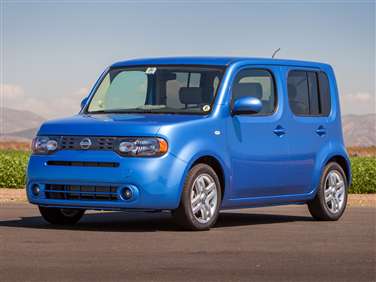 All About Nissan cube

The Nissan Cube is a four-door, five-passenger compact five-door hatchback. The Nissan Cube will compete against other compact hatchbacks including the Scion xB, Honda Fit, Chevrolet Aveo5 and the Kia Soul. In the wake of the highly successful launch and media attention brought on the by its all-new GT-R, Nissan will begin offering another one of its Japanese-based cars for U.S. consumption – the 2009 Nissan Cube. The Cube is one of a growing number of city cars being introduced into the United States market for small size, good fuel economy and funky, unique styling. The Cube’s styling and interior provide are designed to offer extreme individuality and high levels of personalization. The new Cube now increases Nissan’s vehicle lineup to 16 models and this is by far the best interpretation of the company’s Japanese roots. The 2009 Nissan Cube will compete mainly against compact hatchbacks, but most likely it will be cross shopped with the Scion xB and the all-new Kia Soul. Upon its introduction, the all-new Nissan Cube will be available in four trim levels (Cube 1.8, Cube 1.8 S, Cube 1.8 SL and Cube 1.8 Krom), and it will come with a starting MSRP of $13,990 when it goes on sale this spring.

Although the all-new Cube’s design definitely brings the word “boxy” to mind, there are really very few straight lines whatsoever on this car. From just about every angle, the Cube has a design that incorporates rounded lines that help give the car a tall, wide-looking stance. The headlamps and taillights stretch the width of the car and use similar oval shapes, while the profile reveals almost circular side windows. The Cube’s design also helps accent the relatively long wheelbase (99.6 inches compared to an overall length of 156.7 inches) by creating a rear chin bumper which house the taillights. Despite its odd shape and minimal chance of ever being called sporty, the top-of-the-line Cube Krom attempts to add a more street-worthy look to the car with a unique front fascia, 16-inch alloy wheels and a rear spoiler. Adding to the Cube’s unconventional nature, even the available exterior colors come with interesting names such as Super Black and Bitter Chocolate.

While the Cube will undoubtedly be compared to the Scion xB, Nissan looked to avoid what is probably Scion’s biggest flaw: labeling itself as a youthful brand. Nissan instead focused on designing a car that is just as easy to drive as it is fun and providing an enjoyable driving environment for young and old or experienced and inexperienced. The uniqueness of the Cube’s design is definitive of a true “city car” which helps make it easier to drive and park in crowded urban areas. Up front, the short hood makes pulling into spots and navigating tight areas a breeze, while the rear of the car features an odd-looking, asymmetrical shape due to the wrap-around glass on the passenger side and the invisible D-pillar. The “invisible” D-pillar really just eliminates excessive sheet metal on the passenger side that optimizes the driver's diagonal visibility and helps immensely during lane changes or parallel parking procedures.

The Nissan Cube’s cabin is about as quirky as its exterior. From the “floating” gauge pod to the headliner inspired by the ripples made in water, the Cube provides a distinctive, welcoming environment for the driver and passengers to enjoy. The overall shape of the Cube’s exterior design is easily noticeable inside the car as well from the instrument gauges to the door handle pulls. Even fine details help highlight the Cube’s individualistic theme such as the wavy shape of the instrument panel and the unique design of the central HVAC control knob. For rear-seat passengers, the split bench can recline and slide up to four inches fore and aft, and its positioned higher than the front seats creating a theater-style environment. Available interior options include push-button starting, Bluetooth connectivity and a six-speaker Rockford-Fosgate sound system with a subwoofer housed in the side-hinged rear door.

Despite all the personalization and customization available on the new Cube, Nissan’s little hatchback is still only available with a single engine option. Under the hood, the 2009 Cube uses the same 1.8-liter inline-4 as the Nissan Versa putting out 120 horsepower and 127 lb-ft of torque. The standard transmission on the base model is a six-speed manual, while the upper trim levels use Nissan’s latest design of its Xtronic Continuously Variable Transmission (CVT) – both power the front wheels only. Although final fuel economy estimates are not in, Nissan is projecting that its 2009 Cube will get about 30 miles per gallon on the highway. The Cube’s suspension is setup to offer a smooth and comfortable ride with MacPherson struts up front and a torsion beam axle in the rear – front and rear suspensions also use stabilizer bars. Electric power-assisted steering is standard, but the Cube still uses rear drum brakes. For added safety, the Cube comes standard with Vehicle Dynamic Control (VDC) with Traction Control, Tire Pressure Monitoring System (TPMS) and four-wheel anti-lock brakes with electronic brake force distribution and brake assist.