For example, the door trim for the 2015 Nissan Armada has been revised across the range, while two new 20-inch wheel designs are available for the upper-grade SL and Platinum models: The former gets alloys, the latter see chrome clad wheels and 275/60R20 tires are used in all cases. Additionally, the driver's seat of the 2015 Nissan Armada—already an eight-way power-adjustable unit in its standard setup—gains a power lumbar feature, and two new colors, Arctic Metallic Blue and Magnetic Black, join the menu of exterior finishes.

The 2015 Nissan Armada can be pretty well kitted out, too, with navigation, Bluetooth technology, Bose audio, and a rear-seat entertainment system provides two 7-inch video monitors, two sets of wireless headphones and both USB and auxiliary input jacks.

It's also worth noting that even though the 2015 Nissan Armada remains a distinctly old-school choice as compared to the all-new full-sizers from GM, it does have some advantages of its own, starting with its starting price. Sure, it's bumped up a bit for the new model year, but the 2015 Nissan Armada still remains a significant $6,835 less expensive than its Bowtie-branded rival, and its 9,000-lb. max tow rating is 500 lbs. past that of the Tahoe. The standard and only engine, a 5.6-liter V8, helps achieve that mark by running some 317 hp and 385 lb.-ft. of torque through a five-speed automatic transmission. 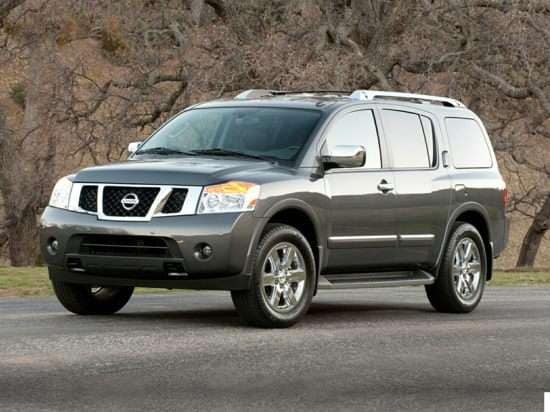