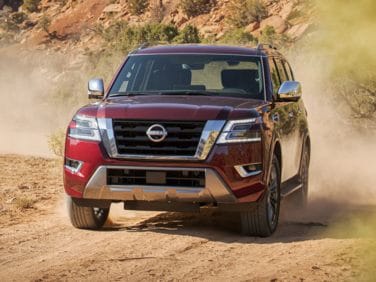 All About Nissan Armada

The Nissan Armada is a four-door, up to eight passenger sport-utility vehicle. The fever to see which company can create the largest sport-utility vehicle on the planet has gripped almost every automaker at one point or another. Most recently, Nissan has risen to the challenge of up-sizing from the mid-size Nissan Pathfinder in order to create a new class of full-size SUV that is bigger than anything they have ever sold in the past. Built on the same platform as the Nissan Titan pickup truck, the aptly-named Nissan Armada lumbered onto the scene in 2004 with an impressively imposing profile and bulk.

The 2009 Nissan Armada is unchanged from 2008, when it received a series of upgrades both inside and out. There are only two different versions of the Armada available, and both use the same 5.6 liter V8 engine, which produces 317 horsepower and a strong 385 lb-ft of torque. The Flex Fuel 8-cylinder, which can be run on E85 ethanol fuel, is mated to a 5-speed automatic transmission and can be had with either two-wheel or four-wheel drive.

The interior of the Armada has been significantly improved, in an effort to lose some of the utilitarian styling that previously linked the SUV a little too closely to the pickup from which it lifts its platform and drivetrain. Able to seat up to eight passengers, (and with 14 beverage holders, keep them all hydrated), the Armada is as big on the inside as its exterior suggests. This size also means impressive cargo room, given that the Armada provides 100 cubic feet of space with the rear rows of seating out of the picture. The Armada SE includes dual climate controls, power windows and door locks, cruise control and power-adjustable pedals so that even those of average height can stay in command of this beast of a vehicle. The LE offers several upgrades such as keyless entry, Bluetooth integration, a rear-view monitoring system to help take some of the stress out of reverse-parking, and heated front memory seats.

Unsurprisingly, the Armada feels its size when behind the wheel, but it doesn’t come across as clumsy or awkward. Nissan has spent some time making sure that the vehicle’s driving dynamics provide a stable and capable experience. The truck’s four-wheel drive system combines with excellent clearance to make the Armada a true off-road vehicle, if that is what is required of it, and the V8 engine is able to keep the Armada moving at a quick pace even when towing up to its 9,1000 lb limit. Fuel mileage is uninspiring – only 12 miles per gallon city driving, and under 20 miles per gallon on the highway – but that is generally the price to pay for a vehicle with this level of utility and sheer size.

The Nissan Armada is a comfortable, well-performing full-size SUV that easily matches the entries from each of the domestic automakers who have traditionally dominated this market segment. With an excellent towing capacity and a powerful base engine, the Armada is ideal for taking the boat to the lake or heading into the woods for a weekend adventure.

The 2009 Nissan Armada has had a few small changes made to it since the last model year. There are a few extra standard features and a few changes have been made to the option packages. New for the 2009 Armada LE trim level are side mirrors with power folding and integrated turn signal lights, heated seats in the front, rear side glass with power flip-out, memory settings and a Bluetooth system for a hands-free phone. The LE also has an optional technology package with a new option for 20-inch chrome-clad wheels. An optional tow package now makes it possible for the Armada to tow as much as 9,100 pounds.

The 2009 Armada comes in two trim levels- the SE and the LE. Both can seat eight and both have rear-wheel drive and four-wheel drive available. Both have a 5.5 liter, V8 engine with 317 horsepower and 386 pounds of torque. The standard transmission is a five-speed automatic.

The base trim level, the Armada SE, comes with 18-inch wheels, climate control with dual zones, side step rails, climate controls in the rear, parking assist in the rear, a power driver seat that can move in eight ways, a stereo with eight speakers, pedals that are power adjustable, a six-CD changer that fits in the dash and one auxiliary audio jack as standard.

The LE trim level features fog lamps, 20-inch wheels, a rearview camera, mirrors with auto-dimming, a power tailgate, side mirrors with power folding, parking sensors in the front, keyless ignition and entry, leather seats in the first two rows, heated seats in the front, a power passenger seat with four-way adjustment, memory functions, Bluetooth technology and a 12-speaker audio system that comes with satellite radio as standard. Most of the LE upgrades can be had on the base model with the addition of option packages.