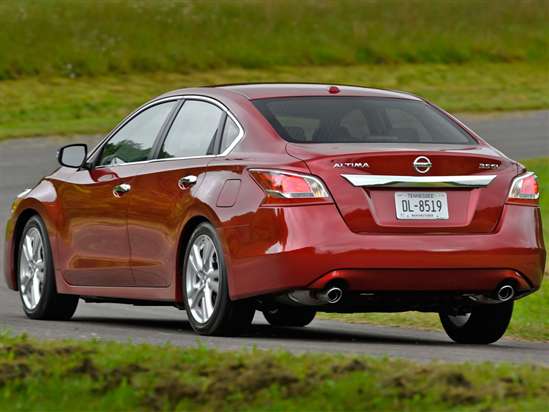 Changes for the 2015 Nissan Altima:

In the face of increasingly appealing competition, Nissan adds standard equipment to the various iterations of the 2015 Altima midsize sedan. Additionally, the available V-6 engine is more fuel-efficient.

Nissan sells the 2015 Altima in 2.5 and 3.5 model series, the former equipped with a 4-cylinder engine and the latter powered by a V-6 engine. The Altima 2.5 is available in base, S, SV, and SL trim levels, while the Altima 3.5 is sold only in S, SV, and SL trim. Further confusing matters, though the trim levels are named the same thing, they contain different equipment, with Altima 3.5 models generally better equipped than the Altima 2.5 models.

To sort things out, we recommend consulting Nissan’s website, especially since the automaker has added a bunch of standard equipment to the SV and SL versions of each car for the new model year.

The Altima 2.5 models are equipped with a 2.5-liter 4-cylinder engine making 182 horsepower. A 3.5-liter V-6 engine is standard in the Altima 3.5 models, rated to generate 270 horsepower. Both engines employ a continuously variable transmission (CVT) to power the front wheels, with Altima 3.5 models featuring paddle shifters to help make that model feel and sound more like a sport sedan.

If you get the Altima 2.5, the EPA thinks you’ll get 31 mpg in combined driving. Choose the Altima 3.5 and that number drops to 26 mpg.

As this summary is published, the NHTSA supplies incomplete crash-test data for the 2015 Altima, suggesting that the government agency is planning to re-test the car. The frontal-impact rating is 5 stars, and the rollover resistance rating is 4 stars. A rating for side-impact protection is not given.

The Insurance Institute for Highway Safety (IIHS) named the Altima a “Top Safety Pick” for 2014, but as this is written it is unclear whether this rating will also apply to the 2015 model. If Nissan has made any unannounced structural changes to improve the small overlap frontal-impact rating from “Acceptable” to “Good,” then the IIHS will need to re-test the Altima for 2015.

Among the changes made for the new model year, Altima 3.5 SV and 3.5 SL models gain a blind spot warning system, a lane departure warning system, a rear moving object detection system, and a navigation system as standard equipment. Previously, these features were optional on these models. Don’t worry. You can still get these upgrades for the 2.5 SV and 2.5 SL.

Every 2015 Altima is equipped with Bluetooth hands-free calling and Nissan’s Easy Fill Tire Alert system, the latter making it really easy to maintain proper tire pressures, which is key to getting great gas mileage and staying safe on the road. The Altima 2.5 S adds smart automatic headlights that are linked to the wipers, as well as Nissan Intelligent Key passive entry and push-button engine starting.

NissanConnect with Mobile Apps technology is standard for the SV and SL models, pairing with a smartphone to run numerous applications from the touchscreen infotainment system.