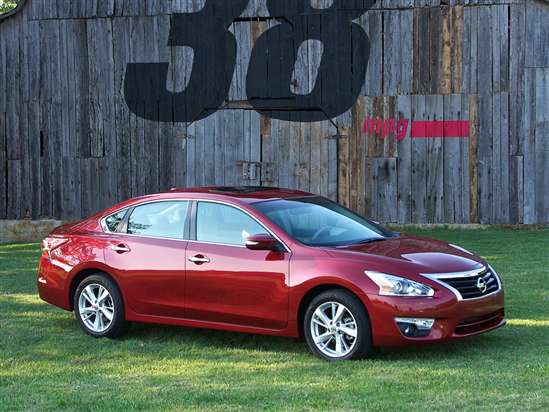 Changes for the 2014 Nissan Altima:

Nissan cancels the Altima Coupe for 2014, leaving an Altima Sedan that was completely redesigned last year. For 2014, the Altima can be optioned with NissanConnect Apps technology, and three new option packages debut titled Display Audio, Technology, and Sport Value. Nissan says the 2014 Altima is quieter than before, and that the fabric used for the seats is better than last year.

The Altima 2.5 is equipped with a 2.5-liter 4-cylinder engine generating 182 horsepower. A 270-horsepower, 3.5-liter V-6 is installed in the Altima 3.5. Both engines power the car’s front wheels through a continually variable transmission (CVT).

In combined city and highway driving, the Altima 2.5 is rated to return 31 mpg, according to the EPA. The more powerful Altima 3.5 gets 25 mpg in combined driving.

According to the National Highway Traffic Safety Administration (NHTSA), the 2014 Altima receives the highest possible overall crash-test rating of 5 stars. The Insurance Institute for Highway Safety (IIHS) hasn’t officially rated the 2014 Altima, but the redesigned 2013 model was named a “Top Safety Pick Plus,” reflecting a passing grade in the tough new small overlap frontal-impact test.

You know how airing up your tires is really important, but is a total pain? Nissan solves that with the Altima’s Easy Fill Tire Alert system. An individual tire pressure monitoring system indicates when a tire is going soft. The driver pulls up to the air hose, unscrews the air cap, and fills the tire. When it has reached the proper pressure, the horn chirps and you’re done.

While that feature is standard for S, SV, and SL models, others are optional. NissanConnect is a touchscreen audio system that can be upgraded with hands-free text messaging, navigation, and new NissanConnect Apps technology. The Altima is also offered with a lane departure warning system, a blind-spot information system, and a Moving Object Detection rear cross-traffic alert system.