convertibles possess a very powerful allure for automotive enthusiasts. There is something about blasting down the road with the wind ripping through a vehicle's cockpit while listening to the un-muted sounds of a car's exhaust pipes that pulls at the heartstrings of car lovers across the country. In fact, some drivers have a passion for rag top motoring that runs so deep, they take matters into their own hands if they are unable to locate a convertible edition of their favorite automobile.

Such was the case with the Nissan 300ZX in the 1990's. The powerful sports coupe from Nissan had struck a chord with performance enthusiasts, but despite the fact that the vehicle sported removable T-tops, drivers clamored for a convertible version of the car. When they were initially denied by Nissan, several 300ZX owners took matters into their own hands and had their vehicles privately converted into custom drop tops. The fact that Nissan fans would go through this time consuming and fantastically expensive process convinced the company that perhaps there was some merit in offering a factory convertible after all.

The Nissan 300ZX convertible died along with the coupe in the mid-1990's, leaving a hole in the Nissan lineup that remained for several years. The company's financial troubles came to a head at the end of the decade, leaving many to speculate as to whether Nissan would be able to survive into the new millennium, let alone release a new sports car or convertible. It wasn't until the emergence of the 350Z in 2003 that devotees were certain that a platform had finally arrived, which would give them the new topless vehicle they so desired.

The 2004 - 2007 Nissan 350Z Roadster is certainly a much better car than the slower, heavier and less rigid 300ZX convertible. The vehicle's attractive styling and performance inclinations have attracted many new buyers into Nissan showrooms, and the Roadster has performed admirably well as a halo car for the brand. The 350Z Roadster's excellent build quality makes it a good choice as a used convertible for anyone interested in a fun summer car which can hang in the corners and provide a sweet 6-cylinder symphony from the dual rear exhaust pipes.

This article lists some of the best qualities found in this popular used convertible from Nissan, and also provides fair warning to plus-size drivers looking to make the car a daily driver.

While the Nissan 350Z coupe is definitely targeted at those looking for a sporty GT car, the 350Z Roadster takes a somewhat different tack. Weighing in at almost 500 lbs heavier than its fixed-roof cousin, the 350Z Roadster is not as tossable through the corners but it definitely does provide more than its fair share of sports car wow when the go-pedal is pushed to the floor. Not only that, but when the vehicle's tonneau cover hides the roof and lets in the sunshine, the Roadster has a stunning, high-belted look that will have pedestrians doing double takes.

The 3.5-liter V-6 engine found in the Nissan 350Z Roadster makes between 287 and 306 horsepower depending upon the year and transmission choice. While the 5-speed automatic has a decent sport mode that allows some driver control over shifting, real enthusiasts will want to leave it behind for the pleasures of the 6-speed manual and the slightly more powerful engine that comes with it. The 350Z Roadster quickly answers any calls to accelerate, and while it may be a half second or two behind the coupe on a race course, out on the back roads it will be difficult to find fault with how the vehicle carves through switchbacks like a champ.

The 2004 - 2007 Nissan 350Z Roadster's only true fault, however, lies in the cockpit. The interior feels much smaller than that of the standard coupe, which makes it difficult for drivers in the neighborhood of 6 feet tall to get comfortable behind the wheel. Optional mesh seats are also less accommodating for those of a larger persuasion. However, if buyers find that they do fit well into the drop top's cockpit, then they will definitely be pleased with the well-instrumented dash and vehicle controls, which include a lap timer incorporated into the vehicle's trip computer.

The 2004 - 2007 Nissan 350Z Roadster packs a lot of fun into a tight-for-some package, making it an appealing choice for anyone who can fit into this used convertible. 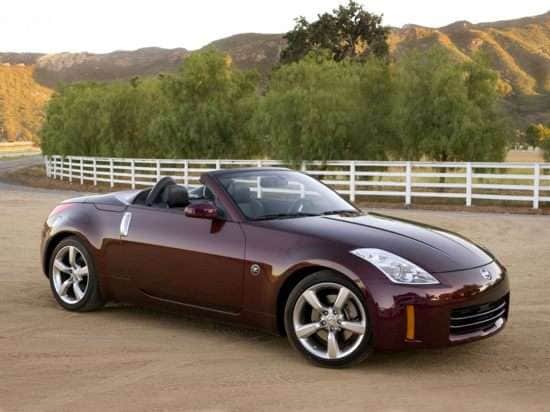