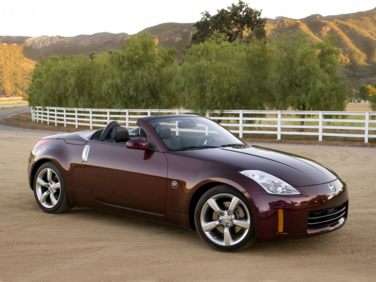 All About Nissan 350Z

The Nissan 350Z is a two-door, two-passenger sports coupe or roadster. From time to time, an automaker is lucky enough to design and produce a vehicle which becomes an icon. When Nissan (then called Datsun) produced the first Z car, the 240Z in 1969, they tapped into a market that had been waiting for that particular type of lightweight, fun to drive sports car. Over the years, Nissan attempted to refine their Z car offerings, but the progression from small, agile 2-seater to bloated grand touring coupe eventually saw the end of the product line in the early 90’s with the 300ZX. The 300ZX was fast and it was stylish, but it was also a far cry from the roots of the Z car spirit.

The Nissan 350Z is a pleasant compromise between the stripped down sporty performance of the original 240Z and the comfortable power of the 300ZX. Still based in large part on the original chassis which debuted in 2002, the 350Z is an attractive, powerful-looking two-door, two passenger sport coupe which is also available as a roadster. The broad face and muscular flanks of the vehicle speak well of the impressive power and handling that this sports car represents.

There are five different trim levels available for the coupe, and three of these are shared with the roadster. The trims are designed to focus on either luxury or sport, depending on the wishes of the buyer. All versions of the 350Z are powered by the same 306 horsepower V6 engine that also generates 268 lb-ft of torque. The base coupe comes with a 6-speed manual transmission, 18-inch wheels and HID headlights, as well as interior goodies such as automatic climate control. Stepping up to the Enthusiast package adds traction control and a limited slip differential, as well as nicer interior amenities. The Touring package is aimed at a more luxury-conscious buyer, with Bluetooth integration, satellite radio and power leather seats, while the Grand Touring trim adds heavier brakes and lightweight forged wheels. The roadster can be had with any of these three trim levels, which also come with the option of a 5-speed automatic transmission.

The coupe gets an extra, high performance NISMO trim, which takes the Enthusiast trim level and injects it with Brembo brakes, super-light wheels, an aggressive aero kit and unique interior. The NISMO 350Z also benefits from a stiffer chassis.

Driving the 350Z makes it clear that Nissan full intends buyers to make a strong connection with both the car and the road. The engine revs quickly up to its 7500 rpm redline, and the car’s low weight for its size (around 3100 lbs) means that the 350Z is adept at sliding through the corners as though it were on rails. The car accelerates hard and it stops hard, especially when equipped with the upgraded Brembo brakes. The unique shape of the vehicle cuts a personalized swathe through traffic – there really isn’t much else out there that looks like a 350Z.

Nissan has had a great deal of success with both the coupe and roadster version of this sports car, and despite the fact that the model has not changed much since its introduction 6 years ago, the 350Z is one of the top sports car contenders currently on the market.

The 2009 Nissan 350Z has a few changes from the previous model year. The hardtop coupe trim is not available this model year. There are a few changes to each for the 350Z trim levels. The 350Z Touring trim has a few new standard features, including a lockable storage compartment located behind the front passenger seat, a seven-speaker stereo system with a Bose six-disc CD player and a subwoofer and leather, heated front bucket seats. The 2009 Grand Touring 350Z trim level has been upgraded with a vehicle dynamic control system unique to Nissan.

For the base level, the 350Z Enthusiast, there is a new option for an aluminum kick plate and high-performance 18-inch tires. New options for the Grand and Touring trim levels are extra paint options and a navigation system that is DVD based. All of the 2009 350Z trims have been given upgraded paint options over the 2008 models and all have been given 18-inch chrome wheels.

The base trim has a number of luxury features standard, including xenon headlights, heated power exterior mirrors, a shifter knob wrapped in leather, power bucket seats, heated exterior power mirrors, cruise control, a CD player, the HomeLink universal transceiver, rack and pinion steering that is speed sensitive and an electric top that goes up and down with the touch of a button. The Touring trim comes standard with heated seats and leather upholstery. All models come standard with electronic brakeforce distribution, a four-wheel disc ABS system and side-mounted airbags in the front seat. The Grand Touring trim also comes with Brembo brakes and vehicle dynamic control.

All of the 2009 Nissan 350Z trim levels, the Touring, Grand Touring and Enthusiast, have a 3.5 liter, V6 engine with 306 horsepower. Each trim comes with either six-speed manual transmission or five-speed automatic transmission.