With more than 100 improvements, the significantly refreshed 2016 Mitsubishi Outlander has a lot going for it. Yes, we know Mitsubishi just updated the seven-passenger compact crossover sport utility vehicle for the 2014 model year. That update still left some things to be desired. With this refresh, Mitsubishi’s engineering and product teams are trying to address those issues.

Quieter, smoother, arguably better looking, and less costly, Mitsubishi Motors has redoubled its efforts to see its Outlander flagship gain a more significant share of the market. They’ve worked hard at it too. In fact, so thorough is this product refresh; you’d be forgiven for looking at the 2016 Mitsubishi Outlander and seeing an all-new model.

However, while there are indeed significant differences, given the underlying platform is still the same, rather than declaring the Outlander an all-new model, we’re going with the phrase "significantly updated." With that said, the changes do transform the Outlander into a more premium feeling automobile all the way around.

It’s no secret Mitsubishi has been floundering of late sales-wise. If fault is to be found somewhere, in addition to a (shall we say?) less than dynamic product roster, the brand has also lacked a clear cut marketing strategy. Because of this, and the outstanding reputation of its Lancer Evolution model, people know Mitsubishi for the Evo (which is getting pretty old) and that’s about it.

Taking this into consideration, in addition to all of the improvements to the Outlander, Mitsubishi is also implementing a focused marketing effort to get the word out about its flagship model.

Starting at a base price of $22,995, which is a full $200 less than the 2015 model, the exceptionally well-equipped Mitsubishi Outlander ES is the base trim package for the 2016 model year.

Rounding out the base model’s standard features set are a 2.4-liter inline four-cylinder engine, front-wheel drive, and a continuously variable transmission.

To get it all, you’ll opt for the $30,995 Outlander GT S-AWC. In addition to all-wheel drive, the GT pack includes a V6 engine with a six-speed automatic transmission, a glass sunroof, a 710-watt premium sound system, LED headlights, remote actuation for the power liftgate, an autodimming interior rearview mirror with Homelink, a windshield wiper de-icer, and power folding exterior rearview mirrors.

In an effort to give the Outlander a more upscale appearance, a new front end has been grafted onto the model. This includes redesigned front fenders, a new headlight array with available LED instruments, a new grille treatment with glossy black trim elements, a skidplate under the front bumper, and a new hood. The revised hood is calculated specifically to enhance the presence of the Outlander by making the vehicle appear wider.

At the rear, the hatch garnish is also new, as well as the LED taillamps and the lower fascia. The profile view offers new trim for the lower edges of the front and rear doors. Other new exterior features include power folding side mirrors and new 18-inch multi-spoke alloy wheels.

Outlander is Mitsubishi’s flagship model in the United States. As such, it needs to represent the best the company is capable of for the price. Interior improvements include new seating surfaces and a knit headliner, which also covers the “A” pillars. Other new interior features include an optional auto-dimming rearview mirror with Homelink, and redesigned folding rear seats, which offer significantly easier operation. Further updating the look of the interior, the brown woodgrain accent trim on the doors and dashboard was replaced with a more contemporary black woodgrain trim.

To enhance the interior ambiance of the 2016 Mitsubishi Outlander, the company’s product planning team specified a redesigned steering wheel as well as a new navigation and display audio system.

The base audio system was redesigned to place the most often used controls on the faceplate, rather than in menus on the touchscreen. Hard keys and a tuning knob were added for more convenience. Additionally, the position of the volume control dial was switched to the driver’s side to make it more readily accessible. The touchscreen menus have been simplified, and the look of the display has been improved for a more upscale appearance.

The upgrade SD Navigation audio system was reworked as well. The most frequently used functions now have buttons on the faceplate, and all controls were enlarged for easier control. Like the base system, the menus have been improved in terms of both color and graphic design.

One thing you’ll notice right away when you drive the 2015 Outlander and the 2016 Outlander back-to-back is that the 2016 model is definitely quieter.

To accomplish this, the thickness of the 18-inch alloy wheels was increased to reduce the transmission of road noise into the passenger compartment. The new acoustic glass windshield further reduces interior noise levels. For even more quiet, insulation was added to the floor to diminish the transmission of undesirable sounds from underneath the vehicle as it passes over the road.

The rear door glass is also thicker, and more sound insulation has been employed throughout the Outlander. Dynamic dampers have been fitted to the front and rear suspension systems, as well as the rear differential to mute noise. Few details escaped notice; the engineering team even specified new weather stripping to reduce wind noise.

The suspension system has been reworked to improve ride quality and handling attributes. Specific efforts have been undertaken to reduce noise, vibration, and harshness in this area as well. Modifications to the suspension system and body have increased rigidity to make the Outlander quieter and more composed on the road. On the other hand, considerable effort was expended to ensure the sound the doors make when one closes them imparts the impression of quality, security, and refinement.

Legroom, headroom and shoulder room are more than adequate at all primary seating positions. Further, even with its elevated ride height, ingress and egress of Outlander’s first and second rows require no extraordinary effort.

The Insurance Institute for Highway Safety named the 2015 Outlander a Top Safety Pick+. The model was awarded the organization’s top rating of “Good” in small overlap front crashes, moderate overlap front crashes, side crashes, roof strength, head restraints, and seats. While the organization has yet to post its findings on the 2016 model, the structural improvements discussed above should stand the 2016 in equal or better stead.

One of the elements required to achieve Top Safety Pick+ status is offering the availability of forward collision mitigation. For the 2016 model year, this technology—along with lane departure warning and adaptive cruise control—are bundled into an affordable $1,550 package intended to make these advanced accident avoidance attributes available to a broader cross section of drivers.

The base powerplant is a 2.4-liter inline four-cylinder with 166 horsepower and 162 ft-lbs of torque. A continuously variable transmission (CVT) is paired with this engine, as well as a choice of front- or all-wheel drive. The CVT has been redesigned to achieve faster response to throttle inputs and reduce torque loss to improve acceleration, while preserving fuel economy. Additionally, the engine control unit has been recalibrated to produce stronger performance and better fuel economy.

The 3.0-liter V6 makes 224 horsepower and 215 ft-lbs of torque. This engine is paired with a six-speed automatic transmission and all-wheel drive. Fuel economy is rated at 20 mpg in the city/ 27 on the highway, and 23 combined. With the V6 and a trailering kit, the 2016 Mitsubishi Outlander can tow up to 3,500 pounds.

Remarkably, driving the 2016 Outlander with the 2.4-liter engine, right after driving the 2015 model of the same displacement, we thought we were driving the V6. Yes, the changes to the CVT and the ECU have wrought that much of a difference. While we wouldn’t characterize the Outlander as quick—by any stretch of the imagination—it does possess more than adequate acceleration.

Merging into fast-moving traffic poses no concerns, and with all of the improvements made to the suspension system, the Outlander’s ride quality is pleasant. It handles decently too. The Mitsubishi does demonstrate a tendency to porpoise over undulations in the road’s surface, but it exhibits only mild body roll when asked to corner briskly. All in all, the compact crossover suv acquits itself rather well on winding mountain roads—when driven smoothly.

As you’d expect, the V6 feels even faster, because its additional power improves the Outlander’s acceleration. The V6 is smooth, refined, and very linear in the way it delivers power. While we feel you could very easily live without it, if you need the towing capacity or like all the other features of the GT package, go for it—you’ll enjoy it.

The sum total of all of these changes does affect the overall character of the 2016 Mitsubishi Outlander for the better. Driven back to back with the 2015 model, the 2016 Outlander is considerably quieter, feels quicker with the four-cylinder engine, is more composed on the road, handles better, and is user-friendlier.

A perfect example of this newfound user-friendliness is how much easier it is to fold the second row seats in the 2016 model. What was previously a several step process rife with befuddlement can now be accomplished in two. The interior treatment is changed just enough for the improvements to be obvious without completely reworking the layout. Meanwhile, the overall exterior appearance would lead one to believe the 2016 Outlander is an all-new vehicle. 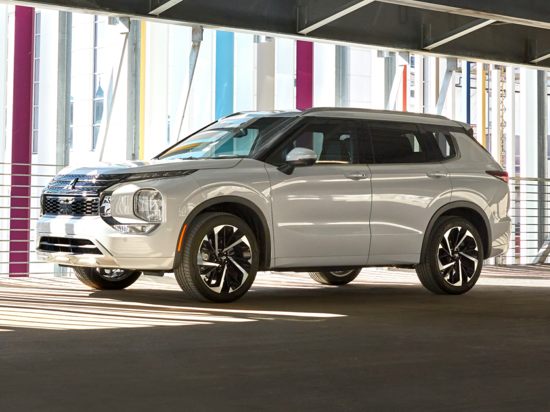