The Mitsubishi Outlander is a four door seven passenger crossover utility vehicle that comes with creature comforts like standard air conditioning, safety features like six standard airbags and stylish touches like LED taillights housed inside a set of clear lenses.  The Japanese automaker offers the Outlander with either a fuel saving four cylinder or a big V6 with either front or all wheel drive in: ES, SE and GT trim levels.

The entry level Mitsubishi Outlander ES is powered by a 2.4 Liter MIVEC four cylinder engine that produces a total of 168 HP and 167 lb-ft of torque, mated to a CVT Sportronic gearbox, which is good for an estimated 23 MPG in the city and as much as 28 MPG on the highway.  The $22,345 Outlander ES is available exclusively with front wheel drive and comes complete with goodies like power accessories, remote keyless entry and a six speaker AM/FM/CD/MP3 stereo with auxiliary input jack on the inside.  While Mitsubishi dresses up the ES with basic items like a mesh grill with black surround, a set of 16 inch steel wheels with covers and a pair of black roof rails.

The next level up for the Outlander is the SE, which starts at $23,345, and is available with Mitsubishi’s All Wheel Control all wheel drive system ($24,845 AWC).  Outlander SE models ride around on a set of 18 inch alloys and come with third row compact seating and the automaker’s FAST Key hands free entry and keyless start feature.  The interior of the SE is upgraded with sport fabric covered buckets with leather bolsters, magnesium paddle shifters, a six disc in dash CD changer, available nine speaker Rockford Fosgate premium sound system with 10 inch subwoofer as well as available Sirius XM Satellite Radio.

The more powerful Outlander GT gets a 3.0 Liter V6 under the hood, producing a total of 230 HP and 215 lb-ft of torque mated to a six speed Sportronic gearbox and is good for an estimated 19 MPG around town and as much as 26 MPG at cruising speed.  The $25,895 GT receives a set of unique 18 inch rims, HID headlamps and an available Thule sport storage rack.  While on the inside, Mitsubishi offers amenities like automatic climate control, chrome interior trim and leatherette upholstery.  Meanwhile the all wheel drive GT S-AWC gains Mitsubishi’s rally proven Super All Wheel Control S-AWC with Active Front Differential and Drive mode-selector that makes the most of available traction with different settings for tarmac, snow and even a fully locking feature; starting at $27,895. 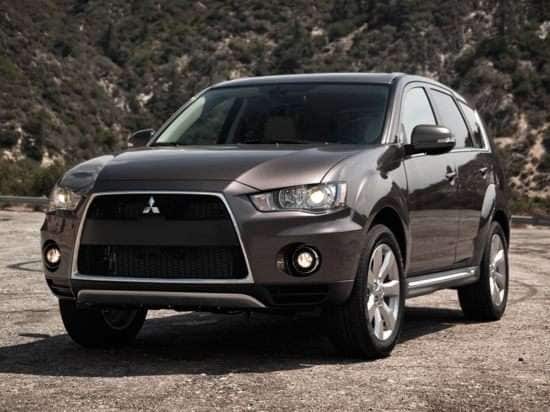