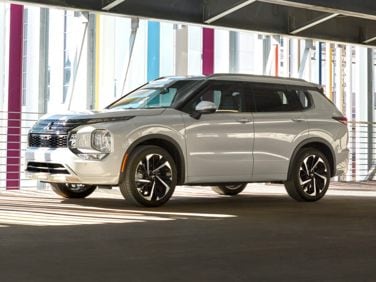 All About Mitsubishi Outlander

The Mitsubishi Outlander is a four-door, up to seven-passenger SUV. The Mitsubishi Outlander (originally known as the Mitsubishi Airtrek in Japan) is a compact crossover that was introduced in 2003. At the time, Mitsubishi was seeking to establish a viable entry in the burgeoning crossover market. However, due to tepid sales and generally lukewarm reviews, the Outlander was redesigned for the 2005 model year. While this current 2nd-generation Mitsubishi Outlander has received a more favorable response, sales are still far below class-leading competitors such as the Honda CR-V and Toyota RAV4.

In a vehicle class that has become saturated with competition, Mitsubishi has tried to differentiate the Outlander by delivering a sportier, family-friendly design. The vehicle shares the same architecture as the compact Mitsubishi Lancer, which is known as the GS platform. The 2nd-generation is larger than its predecessor, with an additional 13 cubic feet of cargo space and dimensions that include a length of 182.7 inches, width of 70.9 inches and height of 66.1 inches. The additional room allowed Mitsubishi to add a third row of seating – a feature that has come to be expected in the crossover market. The 4-door design accommodates up to seven passengers. Other notable styling features that have received praise from experts and drivers alike include a high driving position and family-friendly cargo space.

The Mitsubishi Outlander originally debuted with three trim options – ES, LS and XLS. In the 2008 model year, an additional mid-level SE option was added to the lineup. The base ES model and new SE trim come with a 2.4-liter 4-cylinder engine that delivers 168 horsepower. The engine is coupled with Mitsubishi's automatic continuously variable transmission, known as MIVEC. The LS and XLS Mitsubishi Outlander receive a power upgrade in the form of a 3.0-liter V6 engine. These upper-tier trims offer 220 horsepower and a 6-speed automatic transmission. Maximum towing capacity for all models is 3,500 lbs.

All Outlander trim levels are available in front-wheel drive or all-wheel drive. The AWD system offers three advanced settings that allow users to choose from a 4WD Lock mode, 4WD All Weather mode and 2WD mode.