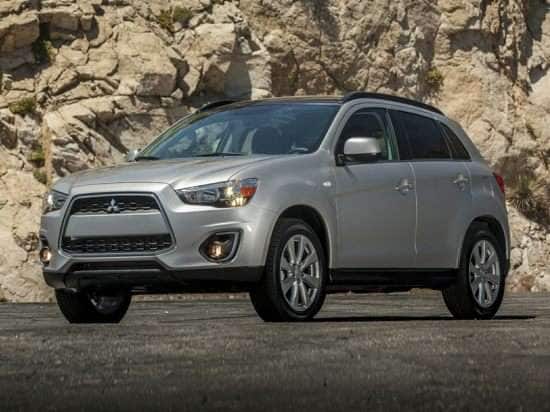 Changes for the 2014 Mitsubishi Outlander Sport:

All 2014 Outlander Sport models get a new radio this year, along with improved sound insulation and standard steering-wheel audio controls. The Outlander Sport SE is now equipped with a standard 6.1-inch touchscreen audio system, HD Radio, satellite radio, and a reversing camera. A new navigation system with a high-definition, 7-inch touchscreen display is optional for the SE, offering voice command control and real-time traffic reports. A power driver’s seat and leather seats are new options for 2014.

The 2014 Mitsubishi Outlander Sport is sold in ES and SE trim levels.

Sadly, the only engine offered in the 2014 Outlander Sport is a 148-horsepower, 2.0-liter 4-cylinder engine, merely adequate motive force for a 5-passenger crossover SUV that weighs more than 3,000 pounds. Imagine how much good a low-pressure turbocharger could do here, one making around 190 horsepower and lots of torque across a broad portion of the lower rev range.

A 5-speed manual gearbox is standard for the ES model, with a CVT making the most of the power as an option for the ES and as standard equipment for the SE. The Outlander Sport is front-wheel drive, and an AWD system is optional.

With its standard manual gearbox and front-wheel drive, the Outlander Sport is rated to get 26 mpg in combined driving. Choose a version with the CVT and FWD, and that number jumps to 27 mpg. Outlander Sport models with AWD are rated to return 26 mpg.

The National Highway Traffic Safety Administration (NHTSA) gives the 2014 Outlander Sport an overall crash-test rating of 4 stars. Viewed in terms of individual test performance, the SUV gets either a 4-star rating or a 5-star rating in all assessments.

The Outlander Sport is also named a “Top Safety Pick” for 2014, thanks to its “Acceptable” performance in the small overlap frontal-impact test combined with “Good” ratings in all other assessments.

Mitsubishi installs Bluetooth connectivity and a USB port in all 2014 Outlander Sport models, while the SE trim level adds the new 6.1-inch touchscreen audio system with HD Radio, satellite radio, and a reversing camera. The Outlander Sport SE also includes rain-sensing wipers and keyless passive entry with push-button starting, and is exclusively available with a 710-watt, 9-speaker premium audio system and a new navigation system with a 7-inch display screen.