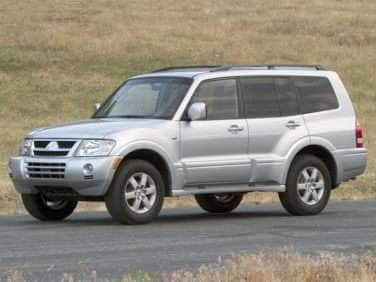 All About Mitsubishi Montero

The Mitsubishi Montero is an SUV that was initially introduced for the 1982 model year. After a 24-year production run and three generations of body design, the vehicle was discontinued by Mitsubishi following the 2006 model year due to sluggish sales. As a midsize SUV, the Montero competed directly with such vehicles as the Nissan Xterra, Ford Explorer and Jeep Commander.

The 3rd-generation Mitsubishi Montero made its American market debut in the 2001 model year. The new design was considerably different than past versions of the SUV. A wider wheelbase and lower stance addressed previous road handling complaints and improved on-road performance considerably. The switch from body-on-frame to a unibody construction and introduction of a fully independent chassis also improved overall performance.

Dimensions for the final Mitsubishi Montero included a length of 190.2 inches, width of 74.8 inches and height of 74.2 inches. Inside, the Montero leaned towards luxury, with the use of upscale components and an ergonomic design. Three rows of seating accommodated up to seven passengers. Total cargo volume for the Mitsubishi Montero was 91.7 cubic feet. Unlike most SUVs, the vehicle featured a right-hinged cargo door.

The Mitsubishi Montero was originally available in two trim levels – XLS and Limited. From 2004 and onward, only the Limited model was available. Standard features available on both trim levels were considerable.

The 3rd-generation Mitsubishi Montero originally came with a 3.5-liter V6 engine that delivered 200 horsepower and 235 lb-ft. of torque. For the 2003 model year, a 3.8-liter V6 engine became the sole engine option for the Montero. This larger engine brought performance up to 215 horsepower and 248 lb-ft. of torque. A 5-speed automatic transmission with manual shift capability delivered 15 mpg in the city and 19 mpg on the highway.