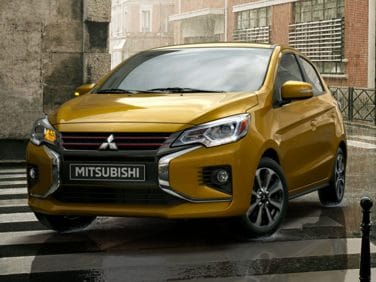 All About Mitsubishi Mirage

The Mirage is a little difficult to trace through the generations, as Mitsubishi used the name inconsistently from model to model, and from region to region. In North America, Mitsubishi shared some resources with Chrysler, which led to sales of the Mirage branded as the Dodge and Plymouth Colt. The Eagle Vista and Eagle Summit were also rebranded Mitsubishi Mirages. Though this is common in the auto industry, especially as a result of partnerships and deals like the DaimlerChrysler and Mitsubishi partnership that existed between 2000 and 2004, Mitsubishi was especially liberal with the use of the Mirage name, as well as the branding of the vehicle itself. Mitsubishi also slapped the Mirage name on a subcompact sport utility vehicle that was available only in Japan (known as the Mirage Dingo), and on a different subcompact sport utility vehicle exclusively for New Zealand (known as the Mirage Space Star).

The first generation of the Mitsubishi Mirage arrived in March of 1978, in the form of a three-door hatchback, and was joined in September by a longer wheelbase five-door hatchback. In most markets, these vehicles served as Mitsubishi’s entry level models. A Mirage sedan later joined the lineup, although it was available only in Japan, sold exclusively through a specific chain of car dealerships. To get around this restriction, Mitsubishi made a duplicate version, called the Lancer Fiore. Mitsubishi stopped manufacturing all the Mirage-branded and Mirage-based vehicles in this generation in October of 1983.

In 1983, Mitsubishi released the second generation of the Mirage lineup, consisting of the    same hatchback and sedan body styles, plus a station wagon that debuted in 1985 and a four-wheel-drive station wagon that debuted in 1986. The lineup was treated to a refresh in 1986, and production ended in 1987. This generation was the first to be sold in the United States under the Mitsubishi Mirage name. The third generation, introduced in 1987, featured rounded, modern designs. It followed the previous body styles and most of the same naming conventions, and was produced until 1991. The fourth generation was produced until 1995. The basic Mirage featured a much more rounded design than previous generations, and the Mirage global lineup of badge-engineered vehicles got even more complicated. This trend continued for the fifth generation, which was produced between 1995 and 2003. When the Mirage went out of production in 2003, the holes in the Mitsubishi lineup were filled by a variety of other vehicles, including the Colt as well as the Lancer, which was still closely related to the Mirage in terms of design and engineering.

Mitsubishi previewed the sixth generation of the Mirage at the 2011 Tokyo Motor Show, for release as a 2012 model year vehicle. It is still available globally, although the array of variants has been simplified.