The entry level Lancer DE is powered by a 2.0 Liter four cylinder MIVEC engine that makes 148 HP and 145 lb-ft of torque being sent to the front wheels via a five speed manual gearbox and is good for an estimated 25 MPG in the city and as much as 34 MPG on the highway.  The $15,695 DE is also equipped with convenience and safety features like power windows and locks as well as seven airbags including one placed specifically for the driver’s knee.  Base Lancers ride around on a set of 16 inch steel wheels with covers and get a four speaker AM/FM/CD/MP3 stereo as well as an anti theft alarm.

The next step up in the Lancer family is the ES, and is available with a continuously variable transmission that brings fuel economy up to an estimated 26 MPG in the city and 34 MPG on the highway.  The $16,995 Lancer ES comes from the factory with aesthetic touches like the chrome grill surround and color matching door handles and side mirrors.

The Lancer SE is powered by a 2.4 Liter four cylinder that generates 168 HP and 167 lb-ft of torque from the larger MIVEC engine mated exclusively to a CVT and is the only nonboosted model to get Mitsubishi’s All Wheel Control, adding extra traction in inclement conditions, which is good for an estimated 22 MPG in the city and up to 29 MPG on the highway.  Starting at $20,195 the all wheel drive Lancer SE is upgraded with a set of 16 inch alloys as well a pair of heated front buckets.

The Mitsubishi Lancer GT is powered by the same 2.4 Liter four cylinder as the SE;  except this time a five speed manual is available as well, good for an estimated 22 MPG in the city and 31 MPG on the highway.  The $19,845 GT comes with an optional back up camera integrated into the rear view mirror, a set of 18 inch alloys hiding a sport tuned suspension, a full color LCD infotainment display, FAST Key electronic keyless entry and starter as well as Mitsubishi’s FUSE Handsfree Link System for wireless connectivity.

Thetop of the line Lancer Ralliart is powered by a 2.0 Liter turbocharged 4B11T, the same motor found in the EVO X, pumped up to 17.9 psi of turbo boost and makes a maximum output of 237 HP and 253 lb-ft of torque being channeled through an active differential to all four wheels via a six seed twin clutch Sportronic (TC-SST) gearbox.  Matching the $27,995 Ralliart’s persona, the factory tuned Lancer gets a lightweight aluminum hood with heat extracting vents on the outside and a set of bolstered buckets wrapped in premium sport fabric. 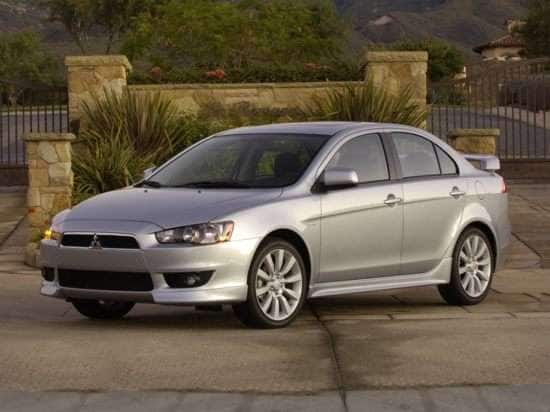