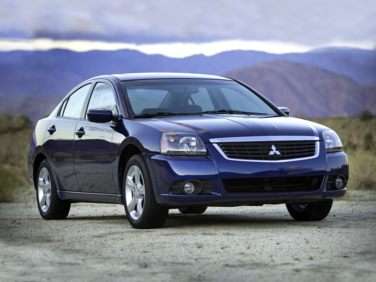 All About Mitsubishi Galant

The Mitsubishi Galant is a four-door, five-passenger sedan. Taking its name from the French word for "chivalrous," the Mitsubishi Galant is a family sedan manufactured and sold by Mitsubishi Motors. Originally released in 1969, the vehicle has undergone eight generational transformations. The current ninth generation was introduced for the 2004 model year. The vehicle is sold in limited markets that include the United States, Mexico, Russia, Arabia and Ukraine. Modified versions of the current Galant have also been sold in Australia, China, Taiwan and the Philippines under the names Mitsubishi Grunder and Mitsubishi 380.

Based on the same PS platform used in the Mitsubishi Eclipse and Mitsubishi Endeavor, the Galant features mid-sized proportions and a 4-door design. In relation to the previous generation, the current Mitsubishi Galant is much larger. Dimensions include a length of 191 inches, width of 72.4 inches and height of 57.9 or 58.2 inches (depending on model features). This growth in size follows a trend in the mid-sized sedan class, initiated by class-leading vehicles such as as the Honda Accord and Toyota Camry.

The interior of the vehicle is uniquely designed and features a sloping center console, large control knobs and blue backlighting. The added girth of the vehicle provides roomy accommodations for up to five passengers.

Minor upgrades to the styling of the Galant occurred in the 2007 and 2009 model years. The 2007 model year changes focused mostly on the interior dash, which was modified to accommodate the newly available GPS navigation system. For the 2009 Mitsubishi Galant, the most notable enhancement was a noticeable upgrade to the front and rear fascia. The current generation of the vehicle is expected to extend through the 2010 or 2011 model year.

The 9th-generation Mitsubishi Galant was originally available in DE, ES, LS and GTS trim levels. As of the 2009 model year only the ES trim level remains, with the other trims being replaced by the Sport Edition, Sport V6 and Ralliart models. Both the base ES and Sport Edition feature a 4-speed automatic transmission and 2.4-liter 4-cylinder engine that delivers 160 horsepower. The Sport V6 upgrades to a 5-speed automatic transmission with manual-shift capability and 3.8.liter V6 engine that ups the ante to 230 horsepower and 250 lb-ft. of torque. The top-of-the-line Ralliart keeps the 5-speed transmission, but adds a few tweaks to the V6 engine to deliver a total of 258 horsepower. A sport-tuned suspension also improves handling and drive performance for the Mitsubishi Galant Ralliart.

The base ES comes with limited standard features that include air conditioning, power windows, power locks and power mirrors. The Sport Edition adds mostly cosmetic upgrades that include alloy wheels and unique trim accents. The Sport V6 includes similar features as the Sport Edition, but adds a high-quality stereo system. The Ralliart bolsters overall appearance with larger alloy wheels and upgraded exterior styling. Standard safety features available on all Mitsubishi Galant models include front side airbags, side curtain airbags and antilock disk brakes. The Ralliart edition also comes standard with traction control. The 2009 Mitsubishi Galant is a carryover from 2008. The 2009 Galant can be ordered in one of four separate trim levels. The base ES and Sport Edition both use the same 2.4 liter, 4-cylinder engine that generates 160 horsepower and 155 lb-ft of torque. A 4-speed automatic transmission sends power to the front wheels, and fuel mileage is rated at 20 miles per gallon in city driving and 27 miles per gallon on the highway for each model. The Sport V6 version of the Galant upgrades to a 3.8 liter V6 pushing out 230 horsepower and 250 lb-ft of torque through a 5-speed automatic tranny. This more robust engine turns in fuel economy of 16 miles per gallon in the city and 25 miles per gallon during highway cruising. At the top of the Galant line is the Ralliart, which tunes the same 3.8 liter V6 used by the Sport V6 trim to produce an additional 28 ponies and 8 more lb-ft of twist. The Ralliart also uses the same transmission and sees fuel economy that is identical to the Sport V6 model.