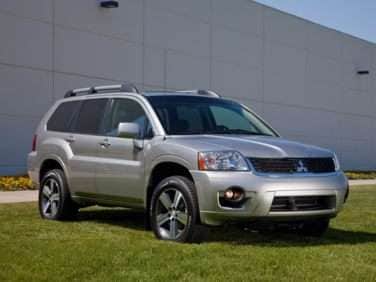 All About Mitsubishi Endeavor

As with most crossovers, the Mitsubishi Endeavor Is intended to incorporate SUV styling in a more compact, car-like package. Built around the car-based PS platform that is also used for the Mitsubishi Eclipse and Mitsubishi Galant, the Endeavor comfortably seats up to five passengers. Vehicle dimensions include a length of 10.2 inches (190.7 for the 2009 model year), width of 73.6 inches and height of 69.6 inches. Whereas most vehicles in the Endeavor's class feature three rows of seats, Mitsubishi has decided to keep things small with two rows of seating and 76.4 cubic feet of cargo space.

When first introduced, the Mitsubishi Endeavor was available in three trim levels – LS, XLS and Limited. The mid-level XLS option was eliminated in 2006 and the luxurious Limited edition was replaced with a similar SE edition in 2007. Both current trim levels come standard with a 3.8-liter V6 engine with no options to upgrade. This engine delivers 225 horsepower and 265 lb-ft. of torque and is matched with a 4-speed automatic transmission with manual shift mode. Front-wheel drive is standard on both trim levels, with the option to upgrade to all-wheel drive.

Currently, all Mitsubishi Endeavor models come standard with front and side airbags. Prior to the 2005 model year, side airbags were unavailable. The 2006 model year also transitioned antilock brakes from optional to standard equipment. In 2007, side curtain airbags were added and 2008 models introduced traction control and antiskid protection as standard for all trim levels.

The Mitsubishi Endeavor has received a lukewarm response from North American buyers. In the Endeavor's inaugural year, Mitsubishi originally intended to sell 80,000 units. This proved overly optimistic, with a total of 32,054 units being sold by the year's end. From 2004 onward, approximately 20,000 units have been manufactured and sold each year. Potential reasons for low sales include a lack of third-row seating (which is available on many competitor vehicles), limited features and inferior engine power.

The 2009 Mitsubishi Endeavor is a carryover from 2008. The 2009 Endeavor is available in two trims. Both the Endeavor LS and SE are powered by the same 3.8 liter V6 engine, tuned to provide 225 horsepower and 255 lb-ft of torque. A 4-speed automatic transmission is the only gearbox option, and fuel economy is rated at 15 miles per gallon in city driving and 22 miles per gallon on the highway for two-wheel drive models. All-wheel drive, which is an option on either trim reduces fuel mileage to 19 miles per gallon on the highway.