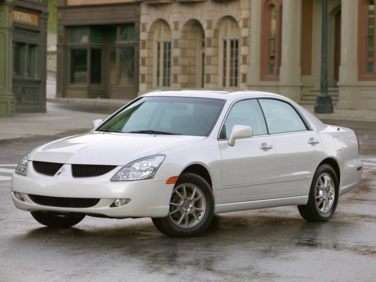 All About Mitsubishi Diamante

The Mitsubishi Diamante is a full-size sedan that debuted in America for the 1992 model year. After two generations of body style, the vehicle was discontinued following the 2004 model year. Vehicles that the Diamante competed directly with for market share included the Acura TL, Nissan Maxima and Mazda Millenia.

The 2nd generation body styling for the Mitsubishi Diamante was unveiled for the 1997 model year. It featured a longer design and roomier interior. The vehicle also included more luxurious styling cues, with rounded fenders and a crisper grille. Final dimensions for the Diamante included a length of 196 inches, width of 70.3 inches and height of 56.5 inches.

In 2002 and 2004, mild exterior upgrades brought a freshened front fascia and grille. Inside, the vehicle was intended to exude luxury. The 4-door design accommodated up to five passengers. Front-seat passengers enjoyed a front headroom of 39.4 inches and a maximum legroom of 43.6 inches. Rear passengers were slightly more cramped, with headroom of 37.5 inches and legroom of 36.6 inches. Total cargo space for the Diamante was 14.2 cubic feet.

In America, the Mitsubishi Diamante was only available with one engine option – a 3.5-liter OHC V6 engine that delivered 205 horsepower and 231 lb-ft. of torque. The VR-X trim featured a tuned version of the same powertrain that delivered 210 horsepower. All models came standard with a 4-speed automatic transmission. The VR-X and LS boasted a manual shift capability.

Other notable performance features available on the Diamante included a sport suspension and traction control. EPA-estimated fuel efficiency for the 2004 Mitsubishi Diamante was 18 mpg in the city and 25 mpg on the highway.

Standard safety features for the Mitsubishi Diamante included dual front airbags, 4-wheel antilock brakes and an emergency trunk release. The vehicle was not tested for safety by either the NHTSA or IIHS.

The Mitsubishi Diamante never quite reached the luxury status that Mitsubishi had intended. Class leaders such as Lexus and Acura continue to outshine the Diamante in the used car market. This low demand may make the Diamante a great bargain option for individuals shopping for a used luxury automobile.