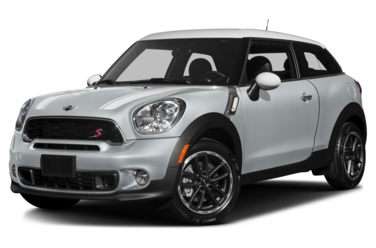 All About MINI Paceman

The MINI Paceman’s mechanicals as well as its design are closely related to the MINI Countryman, which was released as the Paceman was being designed and developed. The Paceman and Countryman feature similar interior characteristics as well as similar features and options. Both vehicles offer MINI’s  ALL4 permanent all-wheel-drive system. The relationship between the two cars is clear upon viewing their front ends, but from the front pillars back, the Paceman is entirely new, although it references styling cues from earlier MINI concept vehicles. As common with other MINI Cooper models, buyers can customize specific areas of their new MINI Paceman with contrasting colors or graphics packages. The door-mounted side mirrors and the roof are two common areas where buyers opt to add a different color or a pattern, such as a checkered flag or Union Jack. The base MINI Paceman includes features such as keyless start, sport suspension, stability control, a six-speaker audio system, Bluetooth wireless integration and USB auxiliary input, and 17-inch alloy wheels. Many of the options and features available on the higher-end trim levels, such as larger alloy wheels, dynamic traction control, high end audio, navigation, and John Cooper Works factory accessories, are also available on the base model.

MINI Coopers are known for compact yet powerful four-cylinder engine options, and the MINI Paceman is no exception. All MINI Paceman models in the United States are based on MINI’s 1.6-liter gasoline unit. In concept car form, the Paceman boasted the MINI family’s most powerful drivetrain, a John Cooper Works 1.6-liter four-cylinder boosted by a twin-scroll turbocharger and tuned for optimum performance. This powerplant is capable of producing 208 horsepower and achieving a top speed of 128 miles per hour. This drivetrain reappeared in the actual production car, but it was available only with the top-of-the-line John Cooper Works ALL4 trim level, which also included the all-wheel-drive configuration and a six-speed manual transmission. A paddle-shift automatic transmission option is available as well. Other engine options for the production version of the MINI Paceman in the United States include a version of the concept car’s drivetrain, featuring the turbocharger but minus its performance tuning, resulting in 181 horsepower. The base model MINI Paceman comes with a 1.6-liter four-cylinder that is not turbocharged, yielding 121 horsepower and a top speed of 117 miles per hour. Drivetrain options vary widely in Europe, where MINI Cooper vehicles are commonly available with diesel engines, and in other global markets.