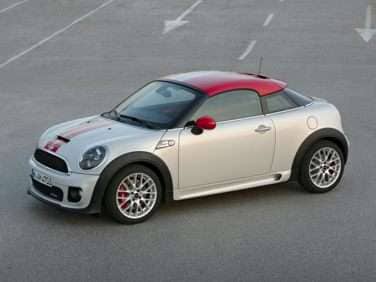 All About MINI Coupe

The MINI Coupe is a compact car based on the MINI Hatchback that was introduced in 2000 after the manufacturer of the classic Mini vehicles came under control of BMW. Though Mini and MINI are British automotive brands, the German auto manufacturer BMW has extensive experience with small, powerful cars. The MINI Coupe is built at a BMW assembly plant in Cowley, England, along with the MINI Hatch, Clubman, Convertible, and Roadster. The MINI Coupe was previewed in June of 2011, exhibited at the Frankfurt Motor Show in September of 2011, and available for sale shortly thereafter. Though the MINI Coupe was noted for being the first two-seater MINI, the Roadster, a convertible version of the MINI Coupe, joined the ranks in 2012. The Roadster wasn’t a surprise reveal, as it had been around in concept form since 2009.

Like the rest of the MINI vehicle lineup, the MINI Coupe is based on a front-engine, front-wheel-drive design. The MINI Coupe also follows other established MINI brand conventions, such as the available portfolio of model trim lines. The MINI Coupe is built and sold based on the Cooper, Cooper S, Cooper SD and John Cooper Works option packages. The Cooper SD Coupe is a turbodiesel model with a 2-liter engine that produces 141 brake horsepower, but its availability is the most limited of all the MINI Coupe packages; it can be purchased only in certain countries and is not available in the United States. The other MINI Coupe models feature gasoline drivetrains that can be found throughout the MINI lineup. The John Cooper Works MINI Coupe is the top of the line model, boasting a 1.6-liter inline-four twin-scroll turbocharged engine, that has been tuned for optimal performance, paired to a six-speed manual transmission. The John Cooper Works drivetrain produces 208 brake horsepower, accelerates from 0 to 62 miles per hour in 6.4 seconds, and tops out at 149 miles per hour. The other MINI Coupe models can be purchased with either the six-speed manual gearbox or a six-speed automatic option. The Cooper S Coupe has a version of the John Cooper Works drivetrain that sacrifices some power because it has not been performance tuned. The base MINI Coupe is powered by a 1.6-liter normally aspirated inline-four. All MINI Coupe models can be ordered with a variety of personalization options for the exterior, including two-tone or racing stripe paint combinations.