10 Things You Need to Know About the 2017 MINI Countryman

When MINI introduced its Countryman in 2010, you may have assumed the world was ending from the way purists reacted. Sure, the automaker had already introduced a stretched version of the Cooper three years prior (the Clubman), but the larger, lifted Countryman was seen as a complete departure for the brand.

Despite the initial outcry, MINI fans came to embrace the sub compact crossover — as evidenced by the droves of them that show up each year during "MINI Takes the States" events. Today, the Countryman is one of the company’s best selling models, suitably challenging micro crossover rivals from both mainstream and luxury marques.

This year, the British marque introduced its second-generation Countryman, further stressing the bounds of what can be considered "mini" but maintaining the styling and substance that are expected from the MINI brand. Here are 10 things you need to know about the 2017 MINI Countryman.

10. It shares just one part with the old MINI Countryman.

10. It shares just one part with the old MINI Countryman.

The 2017 Countryman may share styling cues with last year’s model, but in fact almost every last piece is new. The single holdover from 2016? A wheel cap. Yes, everything from the front-wheel drive platform (borrowed from BMW’s X1 crossover) to the powertrains, to the transmissions, to the interior materials has been reimagined for this subcompact crossover's second generation.

As a result of all this renovation, the Countryman moves upscale in terms of ride quality and interior comfort — two critical factors for entry-level premium shoppers. In short, the good stuff stays good, including the car’s peppy design, nimble handling and (evidently) wheel cap, and the rough edges buff out.

9. It’s the biggest MINI ever (but it’s still pretty small).

9. It’s the biggest MINI ever (but it’s still pretty small).

The use of a new platform gave MINI a chance to improve one of the old Countryman’s pain points: rear leg room. Specifically, the new Countryman's length grows 8.5 inches overall and picks up another 2.9 inches in wheelbase compared to its predecessor. Stacked against its rivals, rear riders enjoy 10.0 inches more legroom than in the Mercedes-Benz GLA and 6.0 inches more than in the Audi Q3. It’s no limo, but it isn’t a little Smart either.

The Countryman’s growth spurt earns it the title of biggest MINI ever, but don’t let that scare you — this is still a compact automobile. About the size of a Volkswagen Golf, the new Countryman still fits in just about any parking space and looks tiny next to a modern SUV. Big fish, small pond… you get the idea.

8. Its interior is basically a light show.

8. Its interior is basically a light show.

Have you ever wondered what your life would be like with theme music? Well, the new Countryman uses the same principle, just with lights. Every input on the updated infotainment system triggers a response from the center stack’s light bar. From the menu, tabbing "navigation" showers the cabin in green light, selecting "media" fills the interior with a red glow, choosing "my car" relays a blue tone, and so on.

This color-response system activates for drive modes too. Pull the trigger on the shifter boot to the left to engage Eco (green), right to access Normal (white) or Sport (red). Even when you aren’t doing anything, the door sills, infotainment display, and center toggles illuminate in preset colors, which you can customize through the infotainment module.

7. There's not a center-mounted speedometer anymore.

7. There's not a center-mounted speedometer anymore.

Apart from the light show, the 2017 Countryman’s updated interior marks the end of a classic MINI design cue: the center speedometer. This love-it-or-hate-it dashboard element has been replaced by a heavily revised infotainment system — housed in a rounded instrument panel that recalls the old speedometer.

Borrowed from the latest BMW products, the system uses an iDrive-esque control wheel, touchpad and menu keys to access the 8.8-inch center display (a smaller screen is standard). For more functionality, steering wheel-mounted controls and a touch-sensitive display add useful redundancies. Vivid, snappy and intuitive, the updated module is a joy to use. Like on other BMW products, Apple CarPlay connectivity is available as an option, but Android Auto is not.

Believe us, you’ll soon forget all about the wall-clock-sized speedometer.

6. You can get one with a plug-in hybrid powertrain.

6. You can get one with a plug-in hybrid powertrain.

Like the previous generation, the 2017 MINI Countryman is available in standard, S and John Cooper Works trims, each with different outputs. Unlike last year, however, the new Countryman is now available with a plug-in hybrid powertrain. Combining a three-cylinder engine, six-speed automatic transmission, and electric motor, the Countryman hybrid makes a stout 221 horsepower and 284 lb-ft of torque. In addition to serving up more torque than any gas-powered Countryman, the plug-in hybrid can operate in electric-only mode for up to 24 miles.

If electrically boosted performance isn’t for you, one of the available turbocharged motors will do the trick. Base Cooper models use a 1.5-liter turbocharged three-cylinder to produce 134 hp and 162 lb-ft of torque. Upgrading to the Cooper S introduces a 2.0-liter turbo four-cylinder with 189 hp and 207 lb-ft of torque. John Cooper Works models tweak the engine further to produce 228 hp and 236 lb-ft of torque. With the exception of the wheezing base motor, the Countryman makes plenty of power for daily driver needs.

5. You can still get a manual transmission.

5. You can still get a manual transmission.

The plug-in hybrid Countryman mandates an automatic transmission, but every other trim can be equipped with a slick-shifting six-speed manual. At a time when such gearboxes are disappearing from new car order sheets, MINI stands by the classic transmission. This particular unit delivers short throws, communicative gear changes, and a forgiving clutch engagement point. Sure, the available eight-speed automatic is faster and more efficient, but it’s nowhere near as fun to operate.

MINI's vehicles may be growing, but they still handle like go-karts. Even with 3,300 pounds to lug around, the new Countryman feels light on its feet while blasting through corners. Responsive steering, light-but-communicative feedback, and a nimble chassis put a smile on any driver’s face.

At the limit, the 2017 Countryman has a tendency to understeer (like most front-wheel drive cars), but the crafty use of the throttle and brake can bring the rear end around nicely. Zipping around town or attacking a back road, the compact crossover is eager to please. MINI is more than a look; it’s a feeling.

A “Country Timer” sounds more like an oven setting than a car feature, but that’s what MINI settled on for its off-road measurement device. The Country Timer uses a software function to monitor the duration and intensity of driving on slippery, angled and unpaved surfaces. Every Countryman starts as a “Street Cruiser,” but if the Country Timer detects consistent operation off-road (or, theoretically, anywhere hilly like San Francisco), it will update the status of your car to “Cliff Champ.”

MINI has used this type of monitoring system before on the Cooper convertible. In that car, those who put down the ragtop enough will trigger the car’s “Open Timer” to change the vehicle status. These type of gamified features keep MINI weird, and we love it.

2. It’s cheaper than every luxury rival.

2. It’s cheaper than every luxury rival.

Though the 2017 MINI Countryman resides in the nebulous compact crossover space, its list of features, performance, and build materials put it on even ground with entry-level luxury models like the BMW X1, Audi Q3, Mercedes-Benz GLA and Infiniti QX30 rather than mass-market offerings like the Jeep Renegade and Nissan Rogue Sport.

Those who appreciate the Countryman’s style and substance will also recognize its value for money. Base models start at $26,100. With all-wheel drive (All4) and the S model's uprated engine, the price climbs to $31,100. By comparison, the cheapest of the Countryman’s luxury rivals, the QX30, starts at just under $30,000 and a similarly equipped QX30 with all-wheel drive will set you back $34,400.

Every version of the 2017 MINI Countryman is now in showrooms, including the all-new plug-in hybrid. If the Countryman’s funky styling, fun-to-drive engineering, and upgraded build materials strike the right chord, be prepared to enter the strange, close-knit world of MINI ownership. 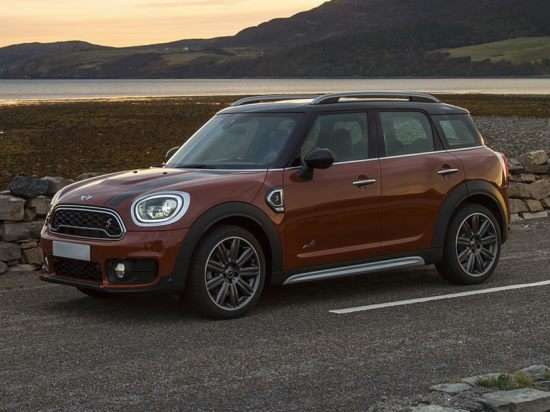