The introduction of the MINI Cooper Countryman charted completely new territory for the brand. Of course, MINI is a marque unafraid of expanding its product line; since the reintroduction of the Cooper Hardtop to North America in 2002, MINI’s offerings have proliferated so quickly the company mascot ought to be a bunny rabbit rather than a bulldog.

Currently, MINI offers seven different models; that’s more than Buick, more than Acura, more than Lincoln, and just as many as Cadillac. In addition to the original Cooper hardtop, there are now a pair of two-seat MINIs in both Coupe and Roadster formats (for the rest of this year at least), a convertible version of the Hardtop, the Clubman crossover coupe, a four-door version of the Hardtop, and the subject of this road test and review, the 2015 MINI Cooper Countryman.

Now here, we have to admit, when we first heard MINI was planning a crossover SUV-ish version of the Cooper, we were somewhat less than impressed. In fact, we pigeonholed it as one more example of jumping on a bandwagon. And honestly, as predisposed as we were to the idea of what a crossover SUV should be, when we saw it, we were even less impressed.

Which is why prejudice has no place in this world.

Turns out the Cooper Countryman is a pretty neat little car.

For the 2015 model year, MINI is offering the five passenger Cooper Countryman crossover station wagon in four states of trim; Base, Cooper S, Cooper S ALL4, and John Cooper Works.

The $26,100 Cooper S Countryman’s standard features add a more powerful engine, dynamic traction control, LED foglights and daytime running lights (newly standard for 2015), a set of sport seats, and a tail spoiler. Drop $27,850 on a Countryman S ALL4 and you’ll add all wheel drive to all of the above.

For the best performance potential, you’ll want to go with the John Cooper Works Countryman ALL4. With pricing starting at $35,350, the package includes an even more powerful engine, 18-inch alloys, a more aggressively tuned suspension system for better handling, and John Cooper Works-specific styling elements.

Many of the features offered as standard on the upper trim levels can be applied to lower trim levels as optional equipment. Other optional features include navigation, adaptive xenon headlights, heated leather seats, a rear parking sensor array, and a 10-speaker Harman Kardon audio system.

A readily discernable member of the MINI family of automobiles, the Cooper Countryman looks pretty much like every other MINI model from the windshield forward. The rounded bulldog face with the oversized headlights and relatively smaller grille ensure the “cute” factor comes through loudly and proudly.

Differentiating the Countryman are its four doors, large tailgate, the shape of the grille, and the shape of the roof. Also, if you look closely, you’ll see the front skidplate under its chin. There’s a similar one at the rear of the wagon and underneath the side sills on all except the John Cooper Works (JCW), which is calibrated specifically for the street. Speaking of the JCW, you’ll also note it features a red accent in the grille and a John Cooper Works badge. Cooper S Countryman gets a chrome grille accent and a stylized S logo badge. Both Cooper S and JCW also get grilles with a slightly different shape than that of the Base Cooper Countryman.

Regardless of the trim you choose, customization remains an integral aspect of the MINI experience. You can get contrasting colored roofs and rear view mirror housings, as well as a broad variety of graphic treatments. There are also sport stripes and hood stripes to make your Cooper Countryman distinctly your own.

The oversized rear hatch is graced with a large MINI badge and the model name emblazoned in chrome lettering across its width. The large taillights bookending the tailgate are a signature MINI element, rendered larger than normal. A pair of exhaust tips peek out of the lower apron, hinting at the sportiness of the model; while the intricately sculpted bumper speaks to the premium nature of the MINI Cooper Countryman.

Inside, it’s kinda “seen one, seen ‘em all”, as the delightfully quirky MINI interior styling treatment we’ve come to appreciate is evident in the Countryman as well. The large, round, centrally located speedometer tells everybody in the car how fast the driver’s going, and whether or not they’re low on gas too.

The middle portion of the large dial is given over to the optional MINI Connected in-car infotainment monitor with its displays for audio entertainment, navigation, telephony, and Internet based services when so equipped. Designed to interface with compatible smartphones, the system allows direct access of certain applications through the controller on the center console. It supports control of a GoPro camera.

Another nice touch of the interior design is the oversized HVAC outlets trimmed in chrome. The tachometer resides on the steering column behind the leather wrapped steering wheel. The tiller also contains buttons for the audio system, telephone, voice controls, and cruise control systems.

All in all, the ergonomics are good – once you get past the initial quirkiness of the design. While it’s definitely a matter of form over function, if you decide you like it enough to buy the car, you’ll get acclimated and it will become second nature.

One of the few models in the MINI lineup capable of seating five, the Cooper Countryman features a reasonably spacious back seat – for a MINI. It also slides fore and aft and features reclining seatbacks. When slid all the way rear, even moderately tall adults can ride back there in reasonable comfort. It ain’t a 7 Series BMW by any means, but it isn’t a torturous experience either.

Front seat passengers have no such concerns; legroom is more than adequate for tall people, and shoulder room – while close coupled – still affords each front seat passenger a comfortable zone of personal space. Still, while the MINI Cooper Countryman is considered a five-passenger vehicle (and yes there are three sets of seatbelts in the back seat), trying to transport more than four adults for any considerable distance is basically inviting discomfort.

One of the highest rated models in its category, the MINI Cooper Countryman scored “Good” (the highest rating) in the Insurance Institute of Highway Safety’s (IIHS) crash tests – including the Institute’s very tough to beat small overlap frontal offset crash testing. This, along with the extensive array of passive and active safety features offered for the MINI Countryman earned it the IIHS’s Top Safety Pick award every year since the model was introduced in 2011.

Engines vary according to trim level in all cases except one. Cooper S Countryman and Cooper S Countryman ALL4 get the same engine. The Base Cooper Countryman runs a 1.6-liter inline four-cylinder engine with 121 horsepower and 114 ft-lbs of torque. A six-speed transmission is standard; a six-speed automatic can be had as an option. Output is fed to the front wheels. Fuel economy with the manual transmission is rated at 28-city, 35-highway, and 32 combined. The automatic is said to be good for 25-city/30-hwy/31-combined.

The John Cooper Works Countryman uses all-wheel drive exclusively and a more powerful version of the turbo 1.6. For JCW applications, the engine generates 208 horsepower and 192 ft-lbs of torque. Fuel economy ratings match those of the Cooper S ALL4 Countryman.

Like every other model in the lineup, the Cooper Countryman delivers an exceptionally dynamic driving experience. Sharp handling, quick steering, and delightfully responsive engines are the norm here.

Yes, the Base Countryman’s 121-horsepower and 114 ft-lbs of torque can leave the car feeling a bit on the lethargic side compared to its turbocharged siblings, but the fuel economy bump with th manual transmission is a nice tradeoff. Further, if you drive the 1.6 with the “Sport” button engaged, the advanced throttle response does make the Countryman feel a bit livelier. However, with the automatic, the fuel economy advantage over the Cooper S is somewhat negated.

Still, when it comes to performance in this model range, you do indeed get what you pay for. With that said, die-hard performance junkies will want to go straight to the John Cooper Works version of the MINI Countryman. In addition to the more powerful engine, you’ll get a suspension system tuned for improved cornering response–albeit somewhat at the expense of ride quality. Here, let us hasten to add the JCW rides relatively well, without a great deal of harshness and crashing over bumps.

Perhaps the best compromise is the Cooper S Countryman though. It rides better than the JCW and offers more power than the Base Countryman; the S also offers all-wheel drive if you go with the ALL4. Basically, it really comes down to the capacity of your pockets and whether you value outright performance over economy.

MINI has steadily evolved as a brand since it was reintroduced to the States back in 2002. Many of you may be aware BMW owns the MINI marque now, and is responsible for many of the engineering solutions found in the cars. In fact, some will go as far as to say MINIs are really front-wheel drive BMWs.

Don’t know we’ll follow along in that regard, but we will say the MINI models are very solidly built. You need only slam the door on one and experience the resounding THUNK it makes to see this borne out. Also, when it comes to driving pleasure, very few models at this price point can compare on equal footing.

Add to all of this the Cooper Countryman’s ability to deal with mild offroad situations (in ALL4 configuration – but not JCW) and you have a rather compelling case for the compact crossover. That said, when it comes to the JCW Countryman, a quick price check finds it competing against some rather significant competition; including its BMW X1 cousin. 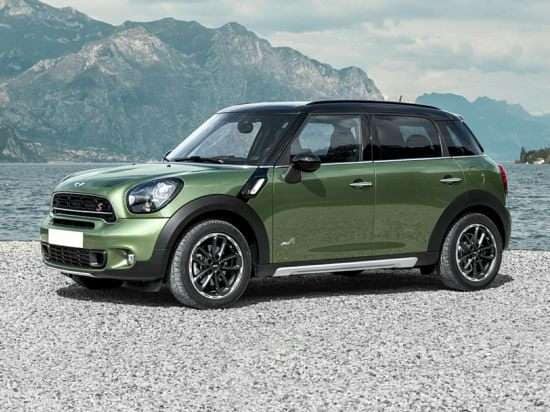