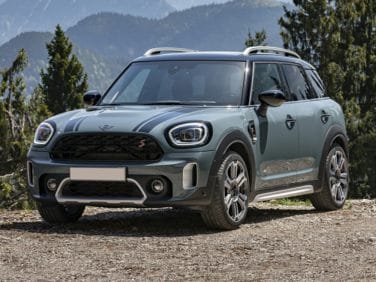 All About MINI Countryman

The introduction of the MINI Countryman marked a deviation from MINI’s model lineup. Not only is it the first MINI to attain the proportions of a crossover SUV, it is also the first five-door MINI model. The MINI Clubman, introduced in 2008, was previously the largest model in the MINI lineup, but the Countryman exceeds the Clubman’s dimensions in wheelbase and ground clearance. The interior passenger and cargo space is also greatly increased, and is nearly three times that of the basic MINI hatchback. BMW added an optional all-wheel-drive system, known as ALL4, to the MINI Countryman, to lend it credibility as a crossover SUV. The ALL4 system enables off-road driving on light to moderate terrain. Otherwise, the MINI Countryman comes as a front-wheel-drive vehicle. The MINI Countryman is powered by the same lineup of drivetrains available in the rest of the MINI model family. In some markets, primarily Europe, the MINI Countryman offers a couple of diesel four-cylinder engine options, but for North American export, the choices are whittled down to MINI’s gasoline engines. All MINI Countryman vehicles are equipped with a six-speed manual transmission as standard equipment, with an available automatic transmission option that includes paddle shifters.

In the United States, the MINI Countryman is available in four trims, which determine not only the car’s powertrain, but the standard and optional features. This arrangement is similar to the configurations of the other models in the MINI lineup. The base model of the Countryman is the Cooper, which rolls in 17-inch alloys and is powered by a 1.6-liter inline-four engine, providing 121 horsepower and a top speed of 116 miles per hour. This is the model that MINI touts for efficiency, since it has Environmental Protection Agency ratings of 28 miles per gallon city, 35 highway, and 31 combined. Trading up to the MINI Countryman S gets a 16-valve inline-four engine boosted with a twin-scroll turbocharger, achieving 181 horsepower and a top speed of 128 miles per hour, with only minor sacrifices to the fuel economy estimates. Shelling out for the Cooper S is necessary to get the optional ALL4 system, which comprises the third trim level. And for the 2013 model year, BMW added the John Cooper Works ALL4 version of the Countryman. This top-of-the-line model is powered by a tuned version of the Cooper S engine, resulting in 208 horsepower. Top speed remains the same, and fuel economy suffers by just a couple miles a gallon. The John Cooper Works ALL4 Countryman also gets 19-inch alloy wheels.