Why is it that when anywhere from 60%-83% of new car buying decisions are made by women (depending on which of the myriad studies on the subject you choose to believe), so many of the reviews are at best condescending in tone to females and at worst sometimes actually call certain models “chick cars?” One unnamed piece even went so far as to say one vehicle was loved only by “yummy mummies.” Really guys, would you talk to your own mother, wife or sister that way?

First off, just as many women as men are passionate about the automobile in general with driving enjoyment and performance ranking high on their “want” list when buying a new car. They can also drive just as hard and fast as a male driver with this fact slowly starting to get noticed thanks to NASCAR superstar Danica Patrick’s racing achievements. Danica is NASCAR’s first female superstar racer and to put that in perspective, women were not allowed to race in Marathons until 1973 when trailblazer Kathrine Switzer was finally “officially” allowed to enter the Boston Marathon.

Also, women want all of the latest in-car technologies and have pushed automaker’s manufacturing abilities with their demands for ever expanding choices in regard to how their new car looks, is optioned out and how it performs. And no car brand has managed to balance appealing to both male and female drivers better than Mini which, let’s be honest, is an automaker all about style, driving fun and expressing yourself through your choice in personal transportation. And no matter if you are a boy or a girl that is something that can help you enjoy life more and feel better about yourself as a result.

The beauty of the entire Mini lineup is that they can be driven by men or women with very little “gender stigma” attached to any models in the brand. In equal measure both sexes lust after the original Cooper hardtop, the convertible, Clubman, Coupe, Roadster and super-fast John Cooper Works Editions. Now Mini has introduced its most practical model ever in the form of the four-door “Mini-SUV” known as the Countryman. Now that’s a lineup that’s yummy to everybody.

But the question is, does the Countryman give away any of that essential quick reacting, semi-hyperactive “Mini-ness” that has made all of its other models so popular with driving enthusiasts? The Countryman is the only model that is available with an all-wheel drive (our tester was so equipped) and the only one with four full size doors but do these attributes make it viable for a small family who might consider some other compact SUV alternative like an Audi Q5 2.0T or Acura RDX?

Well, ladies and gentleman, the Countryman may be a bit smaller than those two SUVs but what it may lose in overall size it makes for in rip-snorting eagerness that will turn give even the biggest grouch an uncontrollable, “Joker” style grin the whole way to the grocery store. As for the rest of our impressions of the 2012 MINI Cooper S Countryman All4, read on for our play by play of impressions.

The 2012 MINI Countryman is a very natural looking interpretation of the overall Mini styling theme just with four doors and a surprisingly roomy 16.5 cubic foot cargo hold before you fold down the second row of seats to a maximum of 42.2 cubic feet. Overall, the Countryman is big enough on the inside to easily handle the needs of any small family or a person with an active lifestyle who routinely carries four people. We tried to squeeze five adults into the Countryman and they were less than comfortable so our recommendation is to stick to four which is still a vast human hauling capacity improvement over any other Mini.

The biggest noticeable difference about the exterior of the Countryman in relation to the rest of its Mini “relations” is its different headlamp design which is a bit more gruff and tough than the cute rotund eyes found in the rest of the range. Well, this Mini is more about hard work so if its eyes sag a little bit more around the edge just consider it a commentary on the struggles of most sleep deprived parents. And, no, this baby doesn’t need any Botox to fix that and if you think it does then maybe you should look at your emotion free face for proof that this whole concept is sick and disturbing to the core. We wouldn’t inject botulism into a car’s hood, much less our own foreheads.

Inside our Mini, we had the no-extra cost five seat version with the rear bench seat which we personally prefer to the four bench seat variation. With the five seat version, we were able to lay a seat cover in the back and our canine road tester 80 pound Daisy Mae (a boxer rescue) was able to recline and enjoy the ride in full dog-nap repose. Plus, if you are carrying a small child (or little person) in the center that would work too with four adults in the car and you never know when you might need that option.

One other benefit of the Countryman in relation to its siblings is that its elevated seating height makes it easy to slide across and into the perches instead of falling into them as is the case in other Minis that are lower to the ground. So the Countryman should prove a more comfortable option for older fans of the brand as far as ingress and egress is concerned. Four seat versions come with a metal slider between the seats where you can add little Mini optional extras like cupholders and sunglass holders. So whatever floats your boat in that regard, go for it, we say. It’s the Mini way.

Otherwise, the 2012 Mini Countryman has pure brand design elements in the interior from the dinner plate sized speedometer in the center of the dash which in our tester surrounded the excellent in-dash navigation unit that was very, very helpful. Controls are typically off-beat with the power window switches still located down near the bottom of the dash styled as old-school toggle switches which to some are exasperating to use but we still think fit the Mini design ethos. Overall, the Countryman has a terrific interior with a unique exterior look that Mini fans will either love or loathe. With Mini, there is no in-between. We just so happen to have really liked the way our Countryman looked.

Even with its full time all-wheel drive system, our 2012 Mini Countryman S All-4 Drive model averaged a supremely steady 24.7 miles per gallon over the course of its week with us. That’s mighty impressive given our heavy right feet generally even if that was below the 25 city/31 highway EPA estimates. Not that we ever get anywhere near those numbers.

Our tester started out at $27,750 and maxed out with options at $36,500 with pretty much every conceivable option represented on our test model including essentials like the panoramic sunroof, smoked black alloy wheels, the Sport Package, Premium Package, Technology Package and in-dash navigation. So what was included in these packages? Well, we much appreciated the automatic climate control, Harmon/Kardon audio system, Mini Connected system for Bluetooth and iPod connectivity, Xenon headlamps and much, much more.

Really, specifying your Mini Countryman exactly how you want it is a very personal experience and we recommend you hit the Miniusa.com website to toy around with their excellent online store. Otherwise, you can always feel free to hit your local Mini retailer and just get swept up in an impulse buy and pick the one on the lot that you feel best suits you and your personality.

For those who live in snowier climates than those we experience here in Southern California near Autobytel headquarters, our Countryman also came equipped with All-4 Drive which can apportion 50% of power to the rear wheels in normal conditions or up to 100% in extreme conditions. We, however, did not ever need to put the system to the test during our 80 degree and sunny week with the Countryman. We, however, were far more enamored with the spunky 1.6 liter 181 horsepower/171 lb. feet of torque turbocharged 4-cylinder engine with its seemingly endless amounts of forward thrust endowed upon us by a silky smooth 6-speed automatic.

Now, from behind the wheel of the 2012 Mini Countryman, there is little doubt that this is the most fun to drive, best handling and grin inducing compact SUV on the market today. Actually, we have no doubt. But is it as fun to drive as the rest of the Mini lineup? Well, it depends on what you are looking for. The Countryman may lack a bit of the go-kart immediacy you find in a regular Cooper S across the rest of the range but then this model also has a much more forgiving ride and suffers from none of the tugging at the steering wheel that afflicts others models under full throttle acceleration. In real world, day to day driving conditions this makes the 2012 Mini Countryman a much easier to live with proposition.

Now, this may mean that the Countryman may lack the 10/10th’s immediacy of other Mini models on track day but really this model isn’t intended for that kind of use. We didn’t track test the Countryman, however, so we can’t fully comment on how well it would do there. Quite frankly, it would probably kick a lot of other “sporty cars” in the tail end with or without its more comfort tailored and practical tendencies. Really, the 2012 Countryman is a tenacious handler with razor sharp steering that is a delight on winding back roads and that is something we definitely proved during our time in this baby SUV. Apologies to Mini if the tires came back to you a little worse for wear but a Countryman calls out for drives on the most challenging roads you know.

But beyond all of that, we want to reiterate what a refined and comfortable cruiser the Countryman proved to be on long freeway slogs thanks to its absorbent chassis and refined interior. Even with quite a few miles on the odometer, our test unit was rattle free and had impressively low wind and road noise levels. As we said, the Countryman makes a fine compromise of razor-sharp, hyper-caffeinated “Mini-ness” mixed with more adult oriented comforts.

We say the 2012 Mini Countryman is a fine fit for anyone out there looking for a pretty darn practical yet ridiculously engaging to drive compact SUV. So whether you are a “Single Lady” waiting for someone to “Put a Ring on it” or truly are a “Macho Man” there is no reason why you wouldn’t love having a Countryman parked in your driveway.

Any caveats? None really except the fact that our built in Mini sunglass holder couldn’t hold our oversize aviator style super trendy Southern California sunglasses. Maybe Mini should look into a “Super Size” sunglass holder for those of us with “Super Size” heads. Other than that, no problems for us during our week with the 2012 Cooper S Countryman with All4 Drive and we couldn’t be happier to report that this “Mini” lived well up to our “Maxi” expectations. 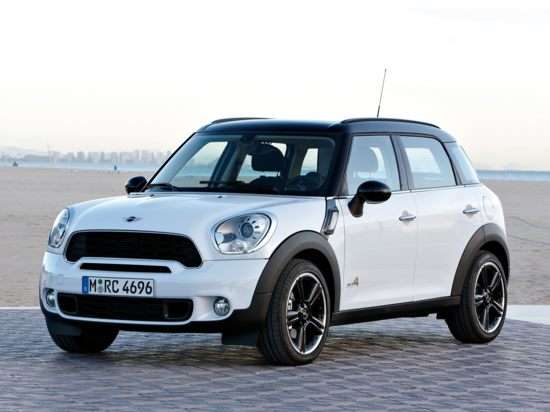