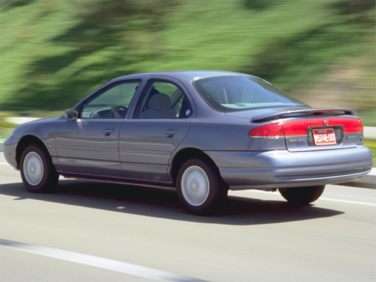 All About Mercury Mystique

Mercury had been a car company set adrift in a changing world without a distinct automotive rudder with which to steer itself. The emergence of the competent Mercury Mystique compact sedan offered a ray of hope that the automaker may be able re-position itself as a purveyor of exciting, fun to drive vehicles, adding an extra dimension to the brand. The Mystique debuted in 1995 on the same platform as its corporate twin the Ford Contour, and was able to connect with buyers who were looking for the handling of European sports sedan without having to pay a premium.

The Mercury Mystique can be had in one of two versions. The base Mystique GS sees a 125 horsepower 4-cylinder engine installed under the hood, which also generates 130 lb-ft of torque. This motor can be mated to either a 5-speed manual transmission or a 4-speed automatic – although the manual is highly recommended to get the maximum performance and fuel economy out of this rev-happy motor. Stepping up to the Mystique LS upgrades the powertrain to a 170 horsepower Duratec V6 engine that can be combined with the same transmission choices. 165 lb-ft of torque help to motivate the Mystique LS to reach a much higher level of performance than its 4-cylinder sibling.

The interior of the Mercury Mystique has a reasonable amount of room for a vehicle of its size, but rear seat accommodations are not comfortable for those of above average height. Even regular-sized passengers may find themselves complaining after more than an hour or two on the road. Other interior appointments are of middling quality, and the basic design visually suggests some of its more upscale competitors without really delivering the goods. While panels, armrests and switchgear are well placed, without necessitating any leaning or reaching to work the stereo or heating controls, the materials used in their construction feel cheaper than they ought to in a Mercury.

Fortunately, the Mystique makes up for many of these shortcomings in terms of driving dynamics. Especially when equipped with the Duratec V6, the Mercury Mystique is a responsive, taught and willing machine, eager to prove itself in corner after corner of wheel-chirping driving. While most front-wheel drive cars suffer from understeer, the Mystique gracefully exits even sharp bends in the road without a groan of complaint or the feeling that driver commands might not actually be executed as expected. The vehicle also lacks significant body roll, and the transmission is smooth, fostering confidence when rowing through the gears.

The Mercury Mystique is an interesting package. Visually it is slightly more conservative than the Ford Contour, but it still has pleasant features and an unassuming presence. While the interior amenities may leave something to be desired, there are few compact front-wheel drive sedans that can match its on-road manners, making the Mystique one of the few inexpensive sedans that is actually a pleasure to drive.

The Mystique was removed from the Mercury lineup near the beginning of the year 2000, in order for Mercury to instead promote the two-door Cougar coupe.