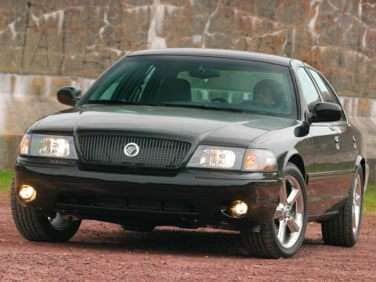 All About Mercury Marauder

When Mercury was looking to inject a little excitement into their full-size mercury Grand Marquis sedan at the turn of the millennium, they dug through their closet to see if any of their past vehicle models could provide inspiration. The Marauder nameplate, which had previously been applied to large displacement sedans in the late 1960s and early 1970s seemed like a good candidate, and in 2003 the Mercury Marauder went on sale. Essentially a performance version of the Grand Marquis, the Marauder featured a more powerful motor and a sportier appearance than the standard sedan.

The 2004 Mercury Marauder was a direct continuation of the model that debuted the year before. The Marauder boasts a monochromatic exterior color scheme, and with the majority of cars being ordered in black, it has a menacing appearance that ties in well with its more aggressive posturing. The vehicle’s aerodynamic front bumper and rear bumper which bears the Marauder name are exclusive to the car, but much of the rest of the body work is similar to that which can be found on the Grand Marquis and Ford Crown Victoria.

The real reason buyers choose the Marauder was to take advantage of the differences under the hood. While the Marauder’s V8 engine still displaces the same 4.6 liters as its more pedestrian cousin, internally the mill has much more in common with the special edition Mustang Mach 1. The engine's 32 valves allow for deeper breathing, and combined with a dual exhaust and a more aggressive compression ratio and camshaft profile, the motor is capable of producing 302 horsepower and 318 lb-ft of torque. This is a significant improvement over the stock sedan, and when running through the 4-speed automatic transmission with an acceleration-oriented rear differential the Marauder can hit 60 miles per hour from a standing start in just over 7 seconds. This is an impressive time for what amounts to a very heavy family sedan.

Inside the Marauder, the competition-inspired makeover continues. The front bench seat has been replaced by leather buckets, with a floor-mounted shifter for the automatic transmission and attractive white-faced gauges that give the car a racier feel. Interior accents are subtle but of high quality, and as with all large Ford sedans, there is plenty of interior room for passengers to stretch out and a huge trunk to carry a massive amount of cargo or luggage.

The Marauder also benefits from an upgraded suspension that uses air springs and upgraded shock absorbers to better absorb the effects of rapid cornering and braking. The chassis of the Grand Marquis is quite stiff to begin with, and it features an excellent steering system that helps to make the Marauder drive as though it were a much smaller car. Large 18-inch tires provide plenty of grip, and while the Marauder is not lightning quick, there is enough fun to be had behind the wheel to put a smile on almost anyone’s face.

The Mercury Marauder was the fastest, best-handling version of the car ever to have been released. Unfortunately, 2004 was the final year of production for this low-volume sports sedan.