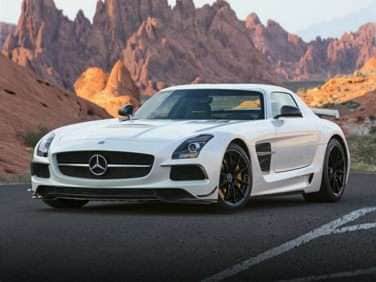 Optimized primarily for track use rather than everyday street driving, the Mercedes-Benz SLS AMG Black Series is a front mid-engine, rear-wheel-drive car. It is recognizable for its distinctive gull-wing style doors. The car is powered by a 6.2-liter V8 gasoline engine with multi-point fuel injectors that yields 622 horsepower, paired to a seven-speed dual-clutch automatic transmission with sport plus and manual operating modes. The gearbox’s manual mode can be activated from the steering wheel with a single touch of the shift paddle. The SLS AMG Black Series boasts a light weight, thanks to a spaceframe construction complemented by carbon fiber mechanical components and outer body panels, as well as a lightweight titanium exhaust system and a lighter lithium-ion battery. Mercedes-Benz says the SLS AMG Black Series is capable of achieving the 0-60 acceleration mark in 3.5 seconds.

The interior of the Mercedes-Benz SLS AMG Black Series features an alcantara-trimmed steering wheel that comes in solid black or a black and red contrast finish, alcantara upholstery on AMG sport bucket seats, alcantara trim on the dashboard and door panels, a black-painted metal air vent bezel, a carbon fiber panel in place of the multimedia system that sits in the center console of the standard Mercedes-Benz SLS (although buyers can opt to have the multimedia system retained), red seat belts, and red contrast stitching on the sport seats and the floor mats. Options for the cabin of the Mercedes-Benz SLS AMG Black Series include a Bang & Olufsen surround sound audio system, a carbon fiber trim package, and an infotainment system with a media interface and a backup camera.