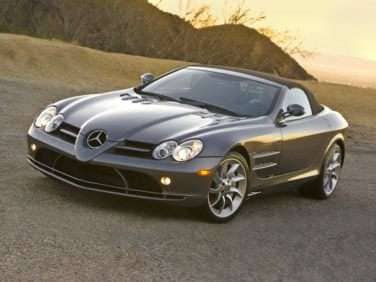 All About Mercedes-Benz SLR McLaren

The sleek design of the SLR McLaren uses many stylish cues from Mercedes-Benz cars new and old. The gull wing doors are a nod to one of Mercedes-Benz’s most iconic models ever produced, the 300SL, while the quad headlamps and the car’s smooth lines help it fit in better with modern Mercedes cars as the CLK-Class. The doors open at a 45 degree angle instead of the original 300SL’s true gull wing action. Adding to the aggressive stance of the SLR, the front fascia has a look similar to a Formula 1 car and the side air intake looks like the gills of a shark. The SLR’s styling was also a direct inspiration to the latest design of Mercedes’ smaller roadster, the SLK-Class.

Although the SLR McLaren is basically a street-legal race car, it still needed a cabin that was comfortable and luxurious enough to wear the iconic Mercedes-Benz badge. Except for the sport bucket seats, the SLR’s interior is just as stylish as any other Mercedes including the prominent SLR badge affixed to the center stack. For added occupant safety, the SLR Roadster gets strengthened A-pillars as well as a pair of fixed rollover bars behind each seat. The use of fabric material for the convertible top may be unconventional (even considering Mercedes’ other roadsters, the SL-Class and SLK-Class, both use retractable hardtops), but Mercedes says that top can withstand high speeds and wind noise inside the car doesn’t affect normal conversation between the driver and passenger.

Under the SLR McLaren’s long hood rests an all-aluminum 5.5-liter supercharged and intercooled V-8 that puts out an astounding 617 horsepower and 575 lb-ft of torque. Each engine is hand built by a single person and features a dry sump oiling system similar to most race cars. Surprisingly, the only transmission available is a five-speed automatic, but this one features Sport, SuperSport and Race modes. Despite its 3,779-pound curb weight, the SLR McLaren can run from 0-60 miles per hour in just 3.8 seconds, and it has a top speed of 208 mph. With a perfectly distributed weight front to rear, the SLR McLaren provides amazing handling capabilities. Braking is also an important part of the SLR’s performance and it uses eight-piston calipers up front, four-piston calipers in the rear and a decklid-mounted air brake that acts as a spoiler to stabilize the car under high-speed braking. For improved braking, the SLR uses carbon-fiber ceramic brake pads and huge brake rotors (14.6 inches up front and 14.2 inches in the rear) in addition to four-wheel anti-lock brakes with electric brake assist.

SLR McLaren 722 Edition Toward the end of production of the hardtop coupe SLR in 2007, Mercedes-Benz offered the SLR McLaren 722 Edition, named after the 300 SLR that Moss piloted in 1955 Mille Miglia, previously an open-road endurance race. For 2009, the same treatment was applied to SLR McLaren Roadster toward the end of its production life cycle and it was named the SLR 722 S. The most recognizable changes to the SLR 722 are the lightweight, palladium grey aluminum wheels, tinted taillights and unique, red “722” badging that mimic the numbering on Moss’ famous car.

The SLR 722 and SLR 722 S don’t just use a fancy appearance package, though. Both offer a boost in output, a chassis retuned at McLaren’s F1 headquarters and aerodynamic and interior changes with the sole purpose of improving the car’s overall performance. Output is increased to 650 horsepower helping the SLR 722 accelerate from 0-60 in about 3.6 seconds and the SLR 722 S in about 3.7 seconds, while the handling has been improved by using stiffer spring, a lower unsprung weight and larger brake discs. Both cars have a top speed of 209 mph and each will be limited in production to just 150 units.