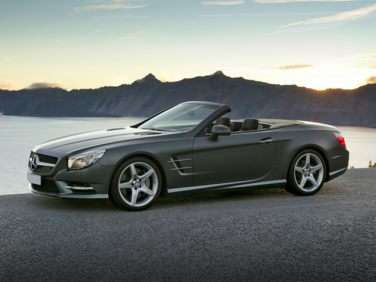 All About Mercedes-Benz SL-Class

The Mercedes-Benz SL-Class is a two-door, two-passenger luxury roadster. The Mercedes-Benz SL-Class is an icon of roadster design. Dating back to the 1950’s, the SL-Class’ many generations have each been heralded as some of the most forward-looking, beautifully designed vehicles of their day. Over the years the SL has evolved from a small, European roadster to a larger, almost full-size luxury grand touring car. However, with each iteration of the SL-Class, the power, elegance and styling have consistently reached new heights.

The Mercedes-Benz SL-Class has been re-styled to help present a more aggressive, muscular look to the world. All versions of the roadster have now been given some of the aerodynamic bodywork that was previously restricted to the AMG models, and the hood features two bulging domes meant to reflect the power which can be found underneath.

In North America, there are two standard versions of the SL-Class, along with two AMG-tuned options. The base SL550 boasts a 382 horsepower, 5.5 liter V8 engine that also generates 391 lb-ft of torque, giving even the entry-level SL-Class impressive performance. Buyers can add 4 more cylinders to their roadster by selecting the SL600, which uses a bi-turbo V12 to grind out 510 horsepower and 612 lb-ft of torque – truly incredible numbers that allow the SL600 to reach 60 miles per hour from a standing start in just 4.4 seconds. Both these engines send power to the rear wheels through a 7-speed automatic transmission which can be manually shifted via paddles mounted to the steering wheel.

The two AMG versions of the SL-Class add a stiffer suspension, a different exterior appearance, and radically different power plants. The SL63 uses a specially-tuned V8 to produce 518 horsepower, while the almost-$200,000 SL65 takes the adds another half-liter and two turbochargers to the V12 to make 604 horsepower and 738 lb-ft of torque. Despite these mind-blowing power statistics, the performance of the two AMG vehicles is roughly the same as the SL600, suggesting that perhaps Mercedes has found the limits of the current SL-Class chassis.

In addition to the prodigious power plants, the SL-Class also offers immensely enjoyable top-down motoring. A retractable hard top makes the convertible very livable 12 months of the year no matter what type of climate the car may find itself in. For those who tough it out in colder weather, Mercedes-Benz has outfitted the car with what it calls an ‘air scarf’, a system which uses special heating vents to keep a layer of warm air around the driver and passenger’s upper body. The cockpit is adorned with high quality materials, and the heated leather seats are very comfortable for any length of trip. The SL-Class also benefits from the full range of Mercedes-Benz driver technologies, such as parking assist, and adaptive cruise control.

The SL-Class is at the forefront of full-size roadster design. It offers classier, less complicated styling when compared to the BMW 6-Series, and while it may not provide a manual transmission like its competitor, it does have significantly more power, a deciding factor for many of the buyers shopping in this price range.