Introduction
By Brian Chee
One thing is clear: The world needs another luxury crossover vehicle. Okay, maybe not – but there’s always room for another ‘Benz, even if it is an SUV-, wagon-, car-like thing. At least that’s what the DaimlerChrysler folks are thinking and hoping and plotting, which is why they’ve built the new 2006 Mercedes-Benz R-Class…which looks kinda like that Grand Sports Tourer they trotted out in Detroit a few years ago.

Gulp. That is what it is. Originally introduced at the 2001 North American International Auto Show as the Vision Grand Sports Tourer, DaimlerChrysler has brought it full circle and will now produce an actual vehicle, similar to the concept, for the U.S. and Europe. Pricing has not been announced at this writing, but unconfirmed reports predict prices in the low $70,000 range. Dealerships should start seeing the R sometime in the fall of 2005.

The 2006 Mercedes-Benz R-Class is a luxury crossover vehicle offered in two trims, the R350 and the R500. Built in Alabama on the same platform as the new M-Class, the R-Class will offer three rows of seats inside an interior designed to be spacious for six adults. As yet another luxury crossover option in a crowded field, the 2006 Mercedes-Benz R-Class is one that will either go a long way toward improving Mercedes’ fading reputation for quality (see: Consumer Reports) or fall by the wayside, just another forgettable crossover compromise. It matters because of its styling and Mercedes-Benz technology, such as a seven-speed transmission, matched to three rows of seats and what officials tout as a spacious, well-designed interior.

Dealerships should get delivery of the new 2006 Mercedes R-Class this fall. The United States will get the long-wheelbase version of the R-Class – necessary to accommodate the third-row – while European markets will get a shorter wheelbase model. Mercedes-Benz officials expect U.S. buyers to snap up around 60 percent of R-Class volume, which should be set at around 50,000 units a year. Though pricing was not available at press time, stickers are expected to start in the $70,000 range and climb upward. The R350 will be the entry model, followed by the R500 and its more powerful, 5.0-liter V8 engine. Also expect AMG models to follow shortly after debut, and a turbo-diesel model is also under consideration, equipped with a 224 horsepower engine.

Initially, power for the 2006 Mercedes-Benz R-Class comes from two gasoline engines. The R350 offers a 3.5-liter V6 that makes 268 horsepower and 258 lb.-ft. of torque at 2,400 rpm, thanks in part to variable valve timing. Mercedes officials claim that the R350 develops 87 percent of its maximum torque at 1,500 rpm for excellent off-the-line response. The R500 comes with a 5.0-liter V8 rated at approximately 302 horsepower. The AMG models that follow, the R55 AMG and the R63 AMG, are likely to boost performance to 370 horsepower and 500 horsepower respectively.

The 2006 Mercedes-Benz R-Class features a seven-speed automatic transmission driving all four wheels through a standard 4Matic four-wheel-drive system. Another performance item on the R-Class is a four-wheel traction control system with three open differentials – front, rear and center.

The R-Class achieves a smooth, cushy ride with an Airmatic four-wheel-independent air suspension that includes double wishbones up front and a four-link rear suspension setup. Variable ride height comes standard, and an available Adaptive Damping System can smooth the ride through two main settings – comfort and sport. Braking is handled by 13-inch disc brakes all around on the R350, and 13.8-inch discs on the front of the R500. As with most luxury crossover vehicles today, the R-Class offers ABS, stability control, and brake assist technology.

The major attraction of the R-Class is its styling and interior. In the U.S., that interior comes with a third row of seats and seating for six. There’s an enticing greenhouse atmosphere, with a partial glass roof, mood lighting and sumptuous leather throughout. Interior features include heated front and second-row seating, a steering wheel trimmed in wood and leather, Bird’s Eye maple wood trim, two 32-ounce front cupholders in the center console, and a four-speaker, 80-watt audio system with AM/FM/Weatherband/CD and MP3 playing capability. The R500 adds 18-inch alloy wheels, a grille trimmed in silver and chrome, burl walnut interior trim, and speed-sensitive power steering.

In essence, the 2006 Mercedes-Benz R-Class takes the GST concept and merges it with a traditional Mercedes-Benz style that prizes subtle cues and refinement over bold lines or striking stance. The R-Class follows along the design cues of the new CLS, with a sweeping hood line and dramatic front and rear curves. Of particular note is the front headlight and hood treatment, which has a certain CLS-modern-yet-retro look. Special exterior cues include a chrome grille for the R500, 17- or 18-inch alloy wheels, and a panoramic sunroof.

If you're going to build another luxury suv, you may as well build one like the R-Class – an intriguing vehicle that has a free flowing and spacious interior design. Combine that cabin with two very capable engines – the 268-horsepower V6 for the R350 and a 302-horsepower 5.0-liter V8 for the R500 –and Mercedes should have no trouble selling their allotment in the United States. Ultimately, the 2006 Mercedes-Benz R-Class will do what every luxury crossover is intended to do: make rich people feel comfortable AND powerful, on their way to the store, work, or the country club. 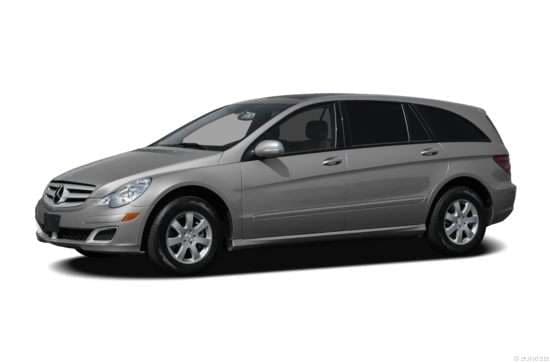