Based as it is on the Mercedes-Benz M-Class SUV, the Popemobile is perhaps the most iconic role Mercedes-Benz’s first mainstream SUV plays. Well, except perhaps the starring role the M-Class enjoyed in Steven Spielberg’s 1997 film The Lost World: Jurassic Park.

In fact, it was through that product placement tie-in the Mercedes SUV was introduced to the world. Seen in the film just before it went on sale in 1997 — as a 1998 model — the M-Class immediately became the darling of luxury suvs.

The first Mercedes-Benz automobile to be built in the United States, the M-Class hails from the city of Vance, in Tuscaloosa county Alabama. The Mercedes-Benz U.S. International factory there also builds the R-Class Mercedes-Benz and Mercedes’ GL-Class.

While the M-Class was the company’s first “mainstream” SUV, it was not the first Mercedes-Benz suv. That honor goes to a vehicle Mercedes designed primarily for military usage, which became known as the Mercedes-Benz “G-Wagen”, (a contraction of the German word Geländewagen, which means cross-country vehicle). Sold for many years in the U.S. as a “gray-market” import, Mercedes-Benz USA began officially importing that vehicle in 2001.

Thus, the 1998 M-Class is the first Mercedes-Benz SUV to be officially (by the company itself) offered in the United States. There have three generations of the Mercedes-Benz M-Class SUV to date.

That first M-Class was an all-new design, one not based on any pre-existing vehicle. A body on frame design, the 1998 Mercedes-Benz ML320 was produced with off-road capability firmly in mind. However, it also incorporated chassis features seen on Mercedes-Benz’s passenger cars — endowing it with both an exceptional ride and agility on the road, even while it displayed outstanding competence in off road situations.

Mercedes-Benz followed up the introduction of the ML320 with a V-8 variant producing 268 horsepower and 288 ft-lbs of torque from a 4.3-liter engine.

Mercedes redid the MLs a bit for 2000, endowing them with a more upscale look and feel. ML320 buyers got body-color bumpers and trim to replace the matte gray pieces from the first ML320. Real walnut laced the inside, along with what was previously an optional leather-wrapped steering wheel and gearshift knob. The standard cloth interior fabric was upgraded, and seatback map pockets and footwell lamps were incorporated. The ML430 got some love too, with the addition of a standard navigation system, high-grade leather upholstery, and heated seats.

The speed demons at AMG finally got their way with the M-Class platform for 2001, releasing a 342-horsepower ML55 AMG upon the public, producing some 376 ft-lbs of torque. In addition to the more powerful engine, the ML55 AMG featured eighteen-inch wheels, an upgraded suspension system calibrated specifically to improve handling on the road, a power dome hood to accommodate the air taller intake and red brake calipers — just to show off.

An optional Sport Package infused the rest of the lineup with a bit more of an aggressive appearance. Its components included unique body cladding, integrated foglamps, a chrome exhaust tip and seventeen-inch alloy wheels. The cloth interior was done away with for the ML320, in favor of M-B Tex (AKA high-grade vinyl) and both the 320 and the 430 got a new four-wheel drive system.

The expanded full-time four-wheel-drive system was calibrated to offer 50/50 torque distribution. The downhill traction control system it incorporated was designed to maintain a low vehicle speed when descending steep grades even over loose dirt, sand and/or rocks. Its "two-foot" crawling mode maximized traction going uphill and prevented the ML from rolling backwards while climbing. The system’s active brake booster built pressure assistance faster, so spinning wheels with no grip could be slowed more quickly.

The 268-horsepower, 4.3-liter V-8 was shelved in 2002, in favor of a 288-horsepower 5.0-liter V-8 capable of 325 ft-lbs of torque. Exterior styling updates brought new head- and tail-lamp lenses, front and rear bumpers, and alloy wheels; along with the relocation of the side turn signals from the fenders to the side-view mirrors. Inside, the center console was revised and all models got wood grain trim as standard outfitting. On the comfort and convenience front, automatic climate control became a standard feature across the board and separate ventilation controls were installed for passengers in the back seat. They got dual cupholders too.

So, for 2002 the model lineup was outfitted as follows; the base ML320 came with sixteen-inch wheels, automatic climate control and burled walnut trim. The ML500 model added standard GPS navigation, seventeen-inch wheels and leather seats. A third-row seat was offered for both. Also offered for both models was a Sport Package with body cladding, a chromed exhaust tip and seventeen-inch alloy wheels. The ML55 topped the lineup with all of the above, plus eighteen-inch wheels, a unique power dome hood, red brake calipers and a lowered suspension system.

The ML320 and the ML55 AMG were discontinued, leaving only the ML350 and the ML500. An optional DVD-based navigation system was offered for the 350, while navigation continued as standard equipment in the 500.

The body on frame architecture was shelved in favor of unit body construction for the second generation of the Mercedes-Benz ML SUVs, which were introduced in 2005, as 2006 models. With the change in architecture came more powerful engines, more luxury features and more space.

Though this new ML was intended more for street than dirt, Mercedes also offered an off-road package with a two-speed transfer case, differential locks and a height-adjustable air suspension.

On the safety front, the model incorporated traction and stability control, four-wheel antilock disc brakes, side-impact bags for the torso and two full-length head curtains. Mercedes-Benz’s optional PreSafe system pulled the front seatbelts tight, adjusted the seats to their optimal positions, and closed the sunroof — if its sensors determined a crash was imminent.

For 2007, two additional ML variants were introduced. The first diesel M-Class offered in the United States came in the form of the ML320 CDI, and the AMG version of the M-Class returned, this time with 6.2-liter V-8 in its nose.

The ML63 AMG on the other hand absolutely sizzled with a 507-horsepower 6.2-liter V-8. The engine made 465 ft-lbs of torque and funneled its output into a seven-speed automatic transmission. While it also used the full raft of luxury features offered with the ML500, the ML63 got a specific interior treatment with sport seats designed to help passengers stay in place while it engaged in the acrobatics it was so readily capable of performing. It also got a sport-tuned air suspension system and twenty-inch wheels. Additionally, navigation and satellite radio, which were options on all other ML models, were standard on the ML63 AMG

A special tenth anniversary edition of the ML350, called the ML350 Edition 10 featured satellite radio and navigation as standard equipment, along with split-spoke wheels, tinted headlight and taillight bezels, a two-tone leather interior with birch wood and aluminum accents, heated seats, a CD changer and "Edition 10" floor mats and exterior badges. You could get one in any color you wanted, as long as you wanted black or white.

The ML500 was supplanted by the ML550, running a 382-horsepower 5.5-liter V-8 making 391-ft-lbs of torque. New features for the ML550 that weren’t offered with the ML500 included AMG-style bumpers and nineteen-inch AMG wheels, along with a set of running boards.

Highlights from the 2008 options list included adjustable air suspension, park assist, smart cruise control, smart xenon HID headlights, leather upholstery, a rearview camera bundled with the navigation system, a rear-seat DVD video-based entertainment system, and a Harman Kardon Logic7 surround-sound audio system with satellite radio. But wait, there was even more; the 2008 Mercedes-Benz ML SUVs could be had with driver memory for the front seats, heated front and rear seats, tri-zone climate control, a sunroof and a power liftgate.

And, all of that was standard on the ML63 AMG.

A rear-drive only version of the ML350 was offered and the ML320 CDI was kicked to the curb, in favor of Mercedes’ new ML320 BlueTec diesel technology. The turbocharged, 3.0-liter V-6 BlueTEC engine, which could be sold in all 50 states, made 210 horsepower and 398-ft-lbs of torque.

A packaging strategy was introduced for options, to ease the ordering process for the (by then) increasingly options laden ML320, 350 and 500.

The packages were configured as follows;

• Everything in the Premium 1 Package plus park assist, power-folding side mirrors, auto-dimming mirrors, front-seat memory settings, keyless ignition/entry, leather seating, and the Heating Package — which consisted of heated front and rear seats and a heated steering wheel.

This wasn’t an issue for the ML63 AMG, which came pretty much fully loaded, except for two optional features, twenty-inch wheels and heated rear seats.

The ML320 BlueTEC was supplanted by the ML350 BlueTEC, and got a slight bump in torque output (400 ft-lbs, up from 398 ft-lbs) in the process. Also on the eco-friendly front, a hybrid version of the M-Class was introduced, the ML450 Hybrid.

Featuring a 3.5-liter V-6, a pair of electric motors and an eight-speed automatic transmission with both fixed and continuously variable ratios, the ML450 Hybrid’s powertrain was good for 335 horsepower and 381 ft-lbs of torque.

With the all-new 2012 M-Class model’s headlights visible on the horizon, the 2011 ML models went forth with very few changes. A blind-spot warning system and LED running lights were offered options and the exterior mirrors were reshaped.

Unfortunately, many quality issues plagued that first generation ML. As a used vehicle, we find it difficult to recommend. However, with subsequent versions of the M-Class, Mercedes got its act together and today’s M-Class is considerably more robust.

Steady improvement with each generation of the M-Class Mercedes SUV kept the American Benz at the forefront of sales in its market segment. With its compelling combination of good looks, amiable road manners, generous feature set, and of course the undeniable appeal of the three-pointed star on its nose, rump and wheels, the ML has been a very successful model for Mercedes-Benz.

If you’re shopping on the secondary market for one of these vehicles, don’t be swayed by the extremely reasonable prices you’ll find scrawled across the windshields of the first generation models (built between 1997 and 2005). The quality of those first vehicles was notoriously poor, and tales of failures are plentiful.

Combine that with the fact you’ll be paying Mercedes-Benz prices for parts and service to keep it running and suddenly its costing an additional $10,000 to $15,000 to keep that $6000 Mercedes SUV on the road. If you’re shopping for one of these SUVs and you can’t afford to buy one of the second-generation models or a newer one, you can’t really afford to buy the first generation one either.

That said, a pre-purchase inspection will be the difference between having your Benz and driving it too. Additionally, you’ll want to run a vehicle history report to ensure the Benz you see is the Benz you’re getting. Recalls notices flew fairly fast and furiously on MLs too, so you’ll want to make sure the example you’re buying has been duly updated. 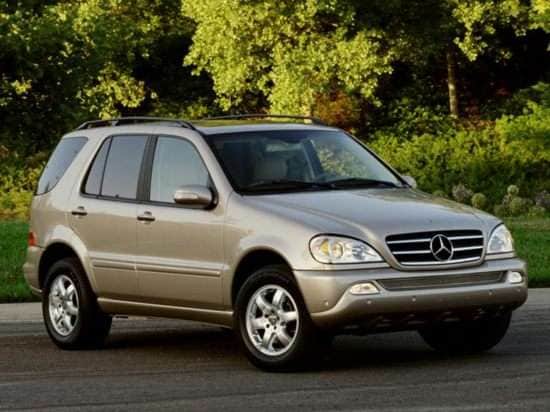 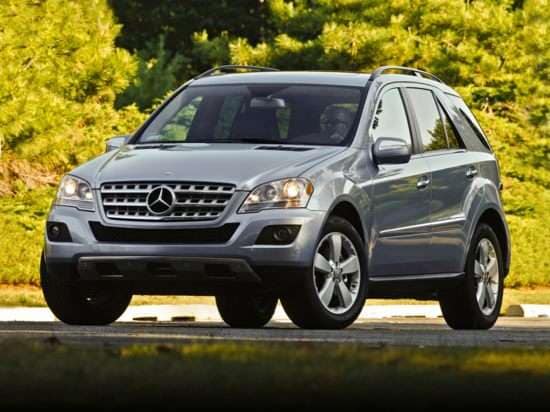 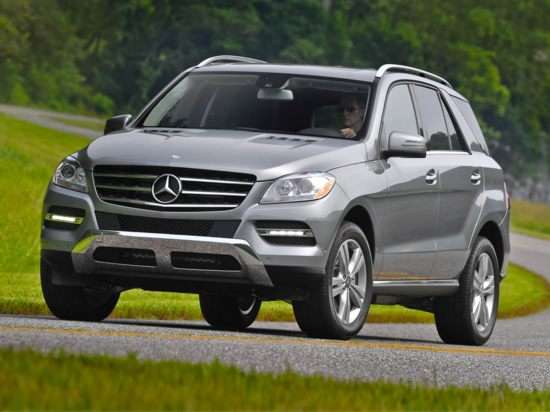