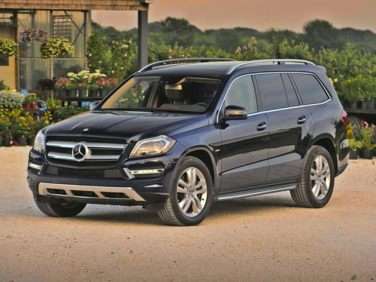 All About Mercedes-Benz GL-Class

The Mercedes-Benz GL-Class is a four-door, seven-passenger luxury sport-utility vehicle. The Mercedes GL-Class is a relatively new offering from the luxury automaker. Born from the perceived need to compete in an ever growing SUV market, the GL is the largest sport-utility vehicle currently on sale from Mercedes-Benz. Built in the United States largely for the American market, the GL was introduced in 2006 as a sort of stretched version of the M-Class, and while it does share some styling cues with this popular, smaller SUV, the GL is very distinctively its own vehicle.

The Mercedes-Benz GL-Class is offered in three separate trims. The first is the GL320 CDI, which employs a 215 horsepower, 3.0 liter turbo-diesel engine that also churns out a very healthy 398 lb-ft of torque. For those who prefer a gasoline engine, the GL450 uses a 4.6 liter V8 the produces 335 horsepower, making for more lively acceleration. If performance is key, then the top of the line GL550 is the safest bet, with 382 horsepower on tap from a 5.5 liter V8 that accelerates the heavy GL-Class to 60 miles per hour in only 6.4 seconds. All versions of the GL-Class make use of all-wheel drive and have a 7-speed automatic transmission installed to handle the shifting duties.

Given that the GL-Class is so large both inside and out, it is no surprise that several of the options and features available with the vehicle are focused on keeping not just the driver but also the 6 other possible passengers happy. Three zones of climate control allow those at the very rear of the GL-Class to enjoy the same comfort as front-seat passengers, and dual headrest-mounted video screens with their own controls can play DVD’s to keep children quiet and entertained during long trips. The GL-Class offers over 80 cubic feet of cargo space with the seats folded down, which is significantly more than the next-in-line M-Class. When it comes to maneuvering this beast of an SUV, a rear-view camera helps to make backing up less of a gamble, and in combination with the Mercedes-Benz Parktronic system of bumper-mounted sensors, the GL-Class has an easier time with urban parking than other large vehicles.

The GL550 is the best equipped of the three versions, coming with 21-inch 5-spoke wheels borrowed from in-house tuners AMG, as well as an optional bicycle rack and illuminated door sills that glow the car company’s name in blue lighting. Wood trim and front leather seats that are both heated and ventilated are also available.

The Mercedes-Benz GL-Class is an intriguing offering from the German automaker. While it might seem as though it is aimed against the Audi Q7, the vehicle’s styling is more of a combination of the Jeep Commander and the M-Class, cementing its appeal to non-European buyers. Whether this vehicle will enjoy the same level of success as its older sibling remains to be seen.