Stallone has one. Schwarzenegger has one. Kim Kardashian has one, although it might be Khloe; I always get those two confused. Mayweather, Azalea, Duff, and Spears each have one, too. The Mercedes-Benz G-Class isn’t the swankiest, most expensive SUV you can buy, but it’s close.

Like the Jeep, the Hummer and the Land Rover, the G-Class was first designed as a military vehicle. When the SUV was first introduced to the public consumption in 1979 its official name was Geländewagen, which is German for “cross-country vehicle.” Fans quickly nicknamed it the G-Wagon, and the name has stuck to this day.

Built in Graz, Austria, the 2018 G-Class competes at the very top of the automotive market, against such exotic six-figure SUVs like the Bentley Bentayga, Land Rover Range Rover Autobiography, Porsche Cayenne Turbo S, BMW X5 M and Tesla Model X. That said, the boxy G-Class has always played its own jingle.

The 2018 G-Class is available in three models: G550, AMG G63 and AMG G65. Each gets its own distinct engine, but all three use the same smooth seven-speed automatic transmission with Comfort, Sport and Manual modes, as well as the same all-wheel drive system.

By far the least expensive of the three is the G550, which starts around $124,000, including $925 for destination. This is the model to get if the network didn’t pick up your sitcom for another season. It’s powered by an incredibly refined 4.0-liter twin-turbocharged V8 engine, which Mercedes also uses in the S-Class sedan. In the G550, it makes 416 horsepower. Standard luxuries include Nappa leather, heated and ventilated power front seats, navigation, dual zone climate controls, a Harman Kardon audio system, 19-inch wheels and a rearview camera. A low range, a lockable transfer case, and lockable front and rear differentials give the G-Class some serious off-road cred.

Enthusiasts Should Get the AMGs

Enthusiasts Should Get the AMGs

There are also two high-performance AMG versions of the 2018 Mercedes-Benz G-Class. AMG is Mercedes’ in-house tuner or hot-rod shop, like BMW’s M division. Since the 1970s, AMG’s engineers have been turning mainstream Mercedes models into some of the fastest cars on the road, adding sport-tuned suspensions, bigger brakes and, of course, more horsepower.

The most affordable is the AMG G63, which gets a hand-built 565-hp twin-turbocharged 5.5-liter V8. It’s the same engine Mercedes uses in less-expensive AMG GLE63 and it’s one of the best sounding engines on the planet. Mercedes says this beast can blast to 60 mph in just 5.3 seconds, which is a full half-second quicker than the G550. This model costs about $143,000.

If your latest film grossed over $100 million domestic, you’ll want to step up to the AMG G65 like our test vehicle. For this model, AMG replaced the twin-turbo V8 with a hand-assembled 6.0-liter twin-turbo V12 cranking out 621 hp and an incredible 721 lb-ft of torque. That makes it the most powerful SUV you can buy, with 21 hp and 57 lb-ft of torque more than the Bentley Bentayga. The Benz is cheaper too — with a base price of around $222,000 the G65 undercuts the Bentley by more than $10,000.

Park a 2018 G-Class in your driveway and you’ll soon realize that the boxy SUV has its own gravitational pull. Within minutes your neighbors exit their homes and walk toward the vehicle like zombies mumbling, “Must touch Mercedes, must sit in G-Wagon.” There’s just something sexy and exotic about it. Considering its appearance hasn’t really changed since 1979, its appeal is hard to explain. Heck, Mercedes still hangs the spare tire outside on the truck’s rear door. Maybe it’s so exciting because it doesn’t look like other Mercedes vehicles, or like anything else on the road. People sure know it’s expensive. Nobody mistakes your G-Class for a $30,000 Hyundai Santa Fe.

Compounding the G65’s magnetism was our test vehicle’s Alien Green paint, which was the color of a glow stick and made sure the SUV could be seen from space. Our test car also wore optional black 21-inch AMG Cross-Spoke wheels that properly showed off its massive cross-drilled brake rotors.

Mercedes says our 6,000-pound G65 test vehicle could accelerate from 0-60 mph in just 5.2 seconds. That’s more than quick enough to shove you back in the seat and leave traffic in the dust. Just don’t pick any grudge races with your buddy in his Bentley Bentayga. Although it’s less powerful, the Bentley is much quicker, hitting 60 mph in an incredible 3.5 seconds.

Although it doesn’t ride as smoothly as other more conventional Mercedes SUVs like the GLE and GLS, the long-travel suspension of the G-Glass does a remarkable job of soaking up the road. Its slow steering takes a little getting used to, but the G65 is pleasant car to drive every day. It’s refined and it doesn’t beat you up. Meanwhile, the G65’s big V12 engine makes a run to the ATM an event, and thanks to the truck’s well-tuned sport suspension and wide 21-inch tires, it also handles better than you would expect for such a tall box riding on a relatively short wheelbase. You'd think it would feel tippy and top-heavy, but it doesn’t.

You sit tall in the 2018 G-Class, behind an upright windshield. The dash is shallow and the controls are an odd mix of modern Mercedes bits that seem a few generations old, along with a prehistoric hand lever for the parking brake. Overall, the interior materials are high-quality. The heated and cooled front seats are extremely comfortable. Control placement is excellent and visibility is good. Although the 7-inch infotainment screen is small for the class, it’s large enough in the G-Class because you’re basically sitting on top of it.

Our test car was fitted with the $15,000 AMG Performance Studio Package, which added carbon fiber trim as well as contrast stitching on the seats, dash and door panels that match the truck’s paint color. The black Nappa leather looked special with the Alien Green stitching. My neighbors loved it. The package also painted the truck’s roof, fender flares and bumpers black.

There’s nothing conventional about the 2018 Mercedes G-Class. Most modern SUVs now have a power liftgate that opens or closes with the touch of a button, and some even operate hands-free. But the G-Glass is a throwback with a back door that swings open left to right. At least it's heavy, thanks to the massive spare tire it carries on its back.

Get it open and there’s ample cargo space behind the second-row seats. That bench is split 60/40 and it folds to create more cargo space, but again it isn’t as easy an operation as in other SUVs. The heavy seats first fold and then tumble forward, and the mechanism is sure to pinch your fingers. With the seats out of the way, Mercedes says there’s 79.5 cubic feet of space, which is about the maximum in a mid-size Mercedes GLE.

Storage inside the Mercedes’ interior also isn't perfect. The center console bin is large enough and the door pockets are sizable, but there’s nowhere to throw your wallet or your phone. There’s also just a single front seat cupholder, and it’s small, made of net and questionably placed.

The 2018 G-Class seats five comfortably. It has plenty of rear seat legroom and rear passengers can spread out and enjoy the rear air conditioning vents, heated rear seats and adjustable headrests.

Despite its astronomical price, the 2018 G-Class offers fewer advanced electronic safety systems than many far less expensive models, both from Mercedes-Benz and even some mainstream brands.

Every G-Glass comes standard with a blind-spot monitoring system, a rearview camera and an adaptive cruise control system that can brake for you if traffic ahead slows or stops. But unavailable features include Mercedes Pre-Safe, Mercedes Collision Prevention Assist Plus, lane departure warning, lane keep assist and cross-traffic assist. It's also missing a camera system that provides a 360-degree view around the vehicle, and Active Parking Assist, which will essentially parallel park the car for you.

It makes a statement.

It makes a statement.

Kind of a cross between a Mercedes S-Class, a Sherman tank and a monster truck, the 2018 G-Class is like nothing else on the road. Although some features and safety technology that are standard on other SUVs at this price point are not available on this Mercedes, the G-Class makes up for that with a unique combination of luxury, performance and unusual aesthetics.

If you’re looking for a conventional SUV with seating for five, a powerful engine and a luxurious interior, there are better choices. But if you want something special, something that makes a statement, then you want a G-Class. 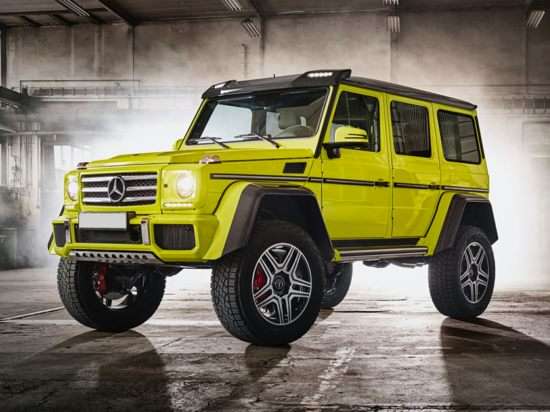