While Japanese and American automakers seem to feel that hybrid-electric vehicles are the way of the future, Germany’s main automakers are still focusing on diesel power. Not to say that the Germans aren’t working on hybrid or other kinds of alternative fuels, but BMW, Volkswagen and Mercedes-Benz will all offer diesel passenger cars in the United States in 2009, and talk of a diesel-powered MINI coming Stateside is also in the works. The main competition for the Mercedes-Benz E-Class includes the BMW 5 Series and the Cadillac STS, but neither one have an answer for the torque-happy E320 BlueTEC.

For Mercedes-Benz and the E320 BlueTEC, it is the latest in the company’s push toward clean diesels, but, ironically, this car does not comply with vehicle regulations in 11 states unlike other Mercedes-Benz 50-state legal BlueTEC models that use urea injection such as the GL320, ML320 and R320. For consumers living outside of California, Connecticut, Massachusetts, Maine, New Jersey, New York, Oregon, Pennsylvania, Rhode Island, Vermont and Washington, the starting MSRP for the E320 BlueTEC is $54,200. Toss in a couple stylish enhancements and convenience items and our test model had an as-tested price of $59,065.

With the 2010 E-Class ushering in an all-new design, the 2009 E320’s 7-year-old design is essentially a lame duck, but that’s not to knock the current car’s elegant styling. When the current E-Class debuted in 2003, it was an attractive car that blended the timeless styling of the smaller C-Class and Mercedes’ flagship, the S-Class. The large chrome grille and oval headlights flow back into the hood with gentle creases. Seven-spoke alloy wheels and aggressively shaped rocker panels help give the E320 BlueTEC a sporty profile.

As is expected from any Mercedes-Benz, the E320 BlueTEC offers a spacious and luxurious cabin. Seating for five is comfortable, but the front seat passengers definitely get the better end of the deal thanks to 10-way power (including power headrests) and heated seats (included in the Premium 1 Package). We just happened to test this car during an extraordinarily cold week in Florida, so the heated seats came in handy on more than one occasion. For the driver, power tilt/telescoping steering column and the useful multifunction display were just a few items that made piloting the E320 a charm. The cabin also featured a stylish contrast between the light tan leather of the seats and door panels and the darker tan coloring of the carpet, upper dash and leather-wrapped steering wheel. A finishing touch and one of the interior’s most attractive attributes, was the burl walnut wood trim on the door panels, instrument panel, center stack and center console. As an option ($700), the car we tested also had wood incorporated into the steering wheel.

For audio entertainment, the base E320 BlueTEC’s COMAND system benefits from a crisp, clear harman/kardon 12-speaker sound system with Dolby Digital 5.1 surround and, of course, Bluetooth connectivity. Our test car added the optional ($2,700) Premium 1 Package that consisted of 40-gig hard drive, GPS navigation, HD Radio and Sirius Satellite Radio and an iPOD/MP3 media interface located in the glove box. Another unique feature that few cars incorporate is the SD card slot, which comes in handy when ripping music from a cell phone’s micro SD card (using the proper adapter) onto the car’s hard drive. With all the options for audio entertainment, As much as we loved the audio/entertainment system in the E320, it also housed our only real gripe about the car’s interior. Unlike the 2008 C-Class we reviewed last year, the E320’s COMAND system does not utilize a control knob mounted on the center console that makes using the system easier and less of a distraction.

The importance of the E320 BlueTEC is, of course, the BlueTEC part. Under the E320’s hood is a turbocharged 3.0-liter 24-valve common-rail injected diesel V-6 that offers up 210 horsepower but an amazing 400 lb-ft of torque. In fact, the E320’s torque limit is just 65 lb-ft short of the performance-tuned E63 AMG. Stomp on the accelerator and the car pins you to the back of the seat. Feeding all that torque to the rear wheels is a smooth-shifting seven-speed automatic transmission with two available modes: comfort and sport. With comfort mode as default every time the E320 is started, shifts are precise as maximize fuel economy, but if the sport mode is selected, each gear is held for just a few extra rpms to improve performance. With the BlueTEC technology, the E320 exhibits a slight, but noticeable diesel knock, there is no obnoxious sulfur odor emitted from the tailpipe that most of the general public associates with diesels.

One truth about diesels that the E320 exhibits is the benefit in fuel economy. With EPA fuel economy estimates 23 miles per gallon in the city and 32 mpg on the highway; during our week with the car, we tacked on about 450 miles (with still about a quarter tank of diesel to go) and averaged just over 30 mpg in mixed driving. Just for comparison’s sake, the slightly more powerful E350 averages 17 mpg city and 24 mpg highway. Whether or not that is enough to warrant the premium diesel demands over gasoline is a matter of opinion, but all that torque sure is fun to drive.

Although the E320 BlueTEC gets the impressive gas mileage and excellent torque, all E-Class models are comfortable cars to travel in. With four-link front and five-link rear independent suspension systems, the E320 is smooth on just about any road surface. 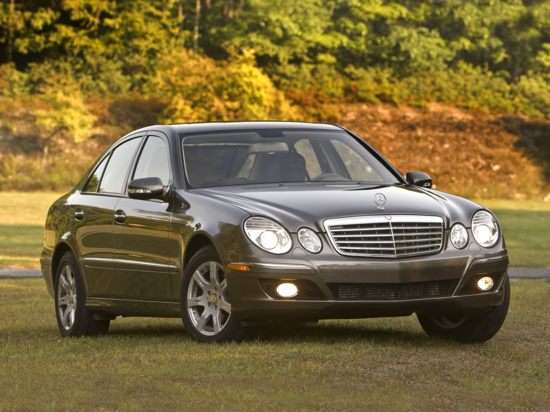