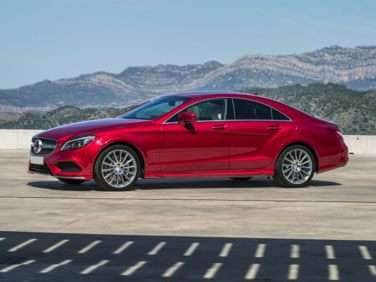 All About Mercedes-Benz CLS-Class

The Mercedes-Benz CLS-Class range is a series of executive size sedans from the German automaker. The production version of the CLS-Class was introduced in 2004 at the New York International Auto Show, and the second generation of the CLS-Class was released in 2011. The CLS features the styling cues of a coupe and the resulting abbreviated rear passenger area, even though it is a four-door vehicle. The CLS-Class offers a high-powered selection of Mercedes’ drivetrain options, in keeping with the expectations of the executive class market, and models in the CLS-Class range are further designated by each example’s particular engine. The CLS-Class is produced at Mercedes assembly sites in Germany and Mexico.

The first generation of the Mercedes-Benz CLS-Class became available in Europe in 2004, and in the United States in early 2005. Initially available with 5-liter and 5.5-liter supercharged V8 engines, those options were phased out in 2006, and a 5.5-liter V8 and 6.2-liter V8 option were brought in for the 2007 model year. Other drivetrains available during this lifecycle included a 3.5-liter V6 that yielded 272 or 292 horsepower. The first generation CLS-Class also had AMG options, designed by Mercedes-Benz’ performance division, Mercedes-AMG. These models featured upgrades such as better sport seats, larger wheels, and subtle exterior modifications, as well as higher performance in the form of a 5.4-liter supercharged V8 or a 6.2-liter V8, producing 493 horsepower and 514 horsepower, respectively. Top speed for all first generation CLS-Class models was limited to 250 mph, regardless of each car’s engine. There were also several CDI diesel versions of the CLS-Class, with limited availability based on market. The CLS-Class boasted an adjustable air suspension with a comfort setting and two sport settings, leather and wood interior trim, and upscale standard and optional luxury and technology features. The first generation of CLS-Class was also notable for its extensive use of the newest safety features available at the time.

The Mercedes-Benz CLS-Class went through an overhaul for the second generation, which went on sale as a 2011 model year car in Europe and a 2012 model year car in the United States, after a preview at the 2010 Paris Motor Show. The front end enjoyed some design and styling changes, including new full LED headlamps. CLS-Class models in the second generation include several environmentally friendly and fuel efficient BlueEFFICIENCY models, a handful of Mercedes-AMG performance models, and several diesel CDI BlueEFFICIENCY options. Gasoline engines yield performance ranging from 302 horsepower for the 3.5-liter fuel efficient models to 577 horsepower for the 6.3-liter twin turbo V8 AMG S-model. Diesel power yield is more modest; 201 or 261 horsepower for the CDI models. A seven-speed automatic transmission comes standard, although the AMG models get a seven-speed sport speed-shift transmission.