Although the German luxury brand calls it a coupe, the 2017 Mercedes-Benz CLA is its most affordable four-door sedan. In fact, it’s the least expensive Mercedes available, with a starting price around $33,000. Among a list of desirable rivals, which includes the Audi A3, Acura ILX, and the Buick Verano, the CLA remains a favorite and is consistently one of the best-selling vehicles in its class. (The BMW 2 Series also plays in this crowd, but it’s only available as a true two-door coupe.)

Built in Kecskemet, Hungary, the 2017 CLA slots below the larger and significantly pricier C-Class in Mercedes’ extensive lineup. Still in its first generation, this luxurious and fun to drive model was updated for 2017 with a few styling revisions, a larger infotainment screen, and a standard rear-view camera.

Let's take a closer look at the popular 2017 Mercedes-Benz CLA.

Two trim levels are available: the CLA 250 and the high-performance CLA 45 AMG. Each gets its own distinct engine, but both have automatic transmissions. The CLA 250 is one of the few cars Mercedes sells with front-wheel drive. It’s powered by a smooth 208-hp 2.0-liter turbocharged four-cylinder engine, which Mercedes also uses in the GLA-Class crossover. A seven-speed automatic transmission with paddle shifters is standard. Prices start at $33,325, including $925 for destination and handling. Mercedes offers its 4Matic all-wheel drive system for an additional $2,000.

If you’re looking for a hybrid Mercedes asks you to step up to the larger rear-wheel drive C350e plug-in hybrid, which combines the 2.0-liter turbocharged engine with an electric motor and a small lithium-ion battery pack. Prices start at $46,975.

Enthusiasts Should Get the AMG

Enthusiasts Should Get the AMG

Next up is the CLA 45 AMG, which gets a 375-hp version of the same turbocharged 2.0-liter four-cylinder. It competes head-to-head with the Audi S3, a souped up version of the A3.

AMG is Mercedes’ in-house tuner or hot rod shop, like BMW’s M division, known for cars like the M3 and M5. Since the 1970s, AMG’s engineers have been re-engineering Mercedes mainstream models into some of the fastest cars on the road, adding sport-tuned suspensions, bigger brakes and of course horsepower. Today there are high-performance AMG versions of the C-Class, E-Class, and several SUVs and coupes.

Packing standard all-wheel drive and a seven-speed automatic transmission, the CLA 45 AMG is capable of sprinting to 60 mph in just 4.1 seconds. That’s considerably quicker than the CLA 250 and the less powerful Audi. It also costs quite a bit more than both; prices start at $50,875.

Compliant, comfortable and quiet, the CLA isn’t a pure sports sedan, but our CLA 250 4Matic test vehicle felt sporty and athletic around town, and a low seating position gives it a sports car feel. With its standard 17-inch wheels and tires, handling is more than enough for most buyers, and its turbocharged 2.0-liter can run from 0 to 60 mph in a sprightly 6.9 seconds. Its seven-speed automatic transmission is tuned well and delivers creamy gear changes. Mercedes Dynamic Select System allows you to tweak the car’s personality and performance with the flip of a switch. There are three modes, Eco, Comfort and Sport, each modifying the engine’s throttle response and the transmission’s shift points.

Still, the vastly more powerful CLA 45 AMG is far more thrilling. It not only delivers more speed, its sport exhaust system also dials up the engine sound, and it’s a heavy metal soundtrack. Thanks to its well-tuned sport suspension and wider 18-inch tires, it also corners with more grip. The resulting ride is firm, but it’s still a comfortable car to drive every day.

Although it’s the brands smallest and least expensive model, the 2017 CLA looks every bit a Mercedes-Benz. Squint, and you’d swear it’s a scaled down S-Class, and its shares the fast roofline of the CLS sedan, which Mercedes also calls a coupe. The days of boxy Benzes are over. The CLA’s body is taut, curvaceous and youthful, with a low and long silhouette and aggressively sculpted sides.

Its complex grille, uniquely-shaped headlights, and front spoiler have been tweaked this year, and the new look is a vast improvement. The grille is a work of art with its intricate dotted mesh, and large three-pointed star and the speed streaks in the hood are a throwback to the classic Gullwing 300SL of the mid-1950s, a car universally considered drop-dead gorgeous. In back the CLA’s tail visually presses its tires into the road, while its large dual exhaust pipes are bold. The decklid’s integrated rear spoiler is an artistic achievement.

This is not a big car. Rear seat legroom is tight, as is rear headroom due to the sedan’s sexy low roofline. Two rear passengers can spread out and enjoy the rear air conditioning vents and the two cupholders, which are part of the fold-down armrest, though a third would feel squeezed. Onboard Wifi is available, although it’s standard on the Audi A3 and Buick Verano. Younger families will appreciate the easy-to-reach LATCH connectors in the outboard seats and three easily accessed upper tether anchors. However, the back seat is tight enough that fitting most rear-facing child seats could be a problem without pushing the front passenger seat far forward.

Families will appreciate the CLA's decent fuel economy. The CLA 250 is the most efficient, rated 24 mpg city and 36 mpg highway. With all-wheel drive, the additional weight added to the vehicle drags those numbers down to 23 mpg city and 32 mpg highway. I averaged 25 mpg during a week of mixed driving. The more powerful CLA 45 AMG is rated 23 mpg city and 31 mpg highway, which isn’t bad considering it’s packing 375 hp.

The interior of this small sedan is a desirable mix of dynamic design, unusual shapes, and solid ergonomics. Although the CLA isn't as lavish as the more expensive C-Class, which looks like it belongs in an auto show concept car, its design is striking, and it offers high comfort and build quality. Its round crosshair air conditioning vents are flat-out cool.

Although everything feels as good as it looks, the standard leatherette upholstery may disappoint some expecting real leather in their new Benz. An 8-inch infotainment screen is standard. It looks like an iPad, but unfortunately, it isn’t a touchscreen,  it's instead controlled by a large knob on the console. Mercedes’ COMAND isn’t the most intuitive system on the market, but most will get the hang of it quickly. The CLA’s steering column mounted shifter also takes a little getting used to. Otherwise, control placement is excellent, visibility is good, and the outside mirrors are well sized. The heated front seats in our test vehicle were very comfortable. The driver’s seat is height-adjustable and the steering wheel tilts and telescopes.

Storage inside the Mercedes’ interior is sufficient and well thought out. The center console bin is acceptably large and lined with felt, and there are two additional cubbies where a traditional shifter would go. They’re the perfect place to throw your wallet and phone. Although they’re not very large, the two front seat cupholders are well placed so tall drinks don’t interfere with any of the switchgear. Also, the door pockets have slots for water bottles.

The 2017 CLA sedan offers 13.1 cubic feet of trunk space, which is about average for the class. If more is needed, every CLA comes standard with a 60/40 split fold down rear seats, which easily folded flat for your larger items. The trunk of the Audi A3 is slightly smaller.

Every CLA comes standard with valuable active safety systems that include a rearview camera; Attention Assist, which watches for driver drowsiness; and rain-sensing windshield wipers. Active Brake Assist is also standard, and it not only warns if a vehicle is in your path, but should it determine an imminent frontal collision, it will also automatically begin braking from speeds up to 65 mph. In such an event, another standard system called PreSafe will tighten the front seat belts, adjust the seats and close the windows and sunroof to prepare the car and its occupants for impact better.

Other systems are optional, such as adaptive cruise control, which can bring your car to a complete stop in non-emergency conditions. There's also Lane Keep Assist, which will vibrate the steering wheel if you drift out of your lane; Cross-Traffic Assist, which warns you if a vehicle is dangerously approaching from either side; and Blind Spot Assist. Mercedes also offers Parking Pilot, which will essentially parallel park the car for you.

If you’re looking for a sporty small-luxury sedan, the updated 2017 Mercedes-Benz CLA is a desirable overall choice. It performs well, it’s quite comfortable and it’s fun to drive. It’s also well-appointed, with an interior that packs a visual punch.

Although some features and safety technology are extra-cost options on the Mercedes, the CLA represents a strong value overall and offers a unique combination of luxury, performance, and style. 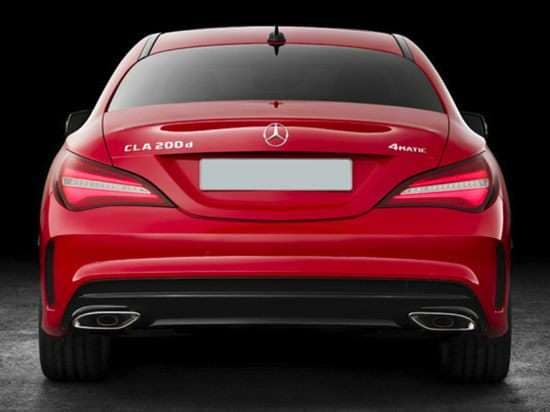