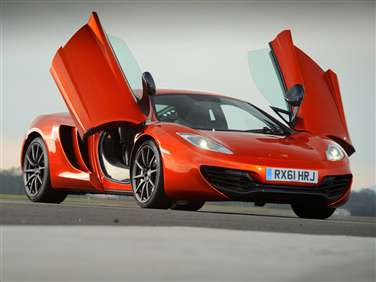 All About McLaren MP4-12C

McLaren Automotive’s MP4-12C is a performance car that was previewed in 2009 and has been produced since 2011. The MP4-12C is available as a two-seat coupe and a two-seat roadster. It is the first McLaren production car since the company’s McLaren F1 model, after the company took a hiatus from building production cars in order to focus on their core businesses of racing and on collaboration projects with other automakers. The McLaren MP4-12C is built at a McLaren facility in Surrey, England, that opened on November 18, 2011. The vehicle is intended to compete with other high performance European cars such as the Ferrari 458 Italia and the Lamborghini Gallardo. The name of this McLaren car follows McLaren naming convention. MP4 is the company’s name for the chassis designation, the same that has been used in all McLaren Formula 1 cars since the early 1980s. The “12” refers to a rating that McLaren Automotive uses within the company to measure a vehicle’s performance. And finally, the “C” refers to the vehicle’s extensive use of carbon fiber throughout the design.

A common technique in McLaren automobiles is to use as much carbon fiber as possible. The high tech material adds strength while reducing weight, a very desirable combination in performance vehicles. The MP4-12C uses a lot of the same engineering techniques as the F1, such as extensive carbon fiber usage, as well as using a similar chassis, which is called the Carbon MonoCell. It’s a single piece carbon fiber tub that is made from a single pressing of the malleable material. However, unlike the F1, in which the driver sat front and center, with two passengers situated behind the prime seat, the MP4-12C features a more traditional side by side seating arrangement, though the cabin is not symmetrical. To improve the driver’s position in the vehicle, an unusually narrow center console allows the driver to sit somewhat more to the center. This arrangement reflects McLaren’s focus on improving the driver’s experience in the car. Buyers of the MP4-12C can opt to customize the cabin asymmetrically, further enhancing the driver’s status in the car. All body and mechanical components of the MP4-12C, including the Carbon MonoCell, are produced by McLaren Automotive’s partners and contractors. Only the final assembly of the MP4-12C actually takes place at the McLaren plant, where it is built, painted, inspected, and prepared for delivery. In addition to the coupe version, there is a convertible variation of the MP4-12C that is called the 12C Spider. The convertible version retains most of the architectural integrity of the coupe, and the retractable hardtop and its mechanical components add only 88 pounds to the car’s curb weight.

The McLaren MP4-12C features a 3.8-liter twin turbo V8 powerplant, the result of a design and engineering collaboration between McLaren and Ricardo. The engine offers 592 brake horsepower and a redline of 8500 rpm. In October of 2012, McLaren announced that changes to the engine would now yield 616 horsepower, and the improvements could be retrofitted to existing customers’ vehicles at no charge. The increase in horsepower is noteworthy because it did not increase the car’s carbon dioxide emissions. The MP4-12C’s engine is paired to a seven-speed automatic dual clutch transmission with a paddle shifter. The MP4-12C boasts a 0-60 acceleration time of 3.1 seconds and a top speed of 207 mph.