2007 Mazda Tribute Hybrid
By Christian Wardlaw
Just because the 2007 Mazda Tribute Hybrid arrives on the market two years after the Ford Escape Hybrid upon which it’s based, don’t think that Ford Motor Company’s zoom-zoom Japanese brand always gets the short-end of the stick. These days, it seems like every other new Ford, Lincoln, and Mercury is based on a version of the capable Mazda 6 platform. Besides, even if the Tribute is the last of FoMoCo’s original trifecta of CUVs to receive hybridization, the system is so slick, and the segment so small, that Mazda still seems like a pioneer.

Look closely, and you’ll see that the 2007 Mazda Tribute Hybrid is actually a Ford Escape Hybrid with minor changes to the fascia and wheels. The other styling modifications that further distinguish the Tribute from the Escape are absent. Of course, those decals won’t be included when this new model goes on sale, but maybe Mazda should include them to provide a clear distinction, eh?

Like the Ford upon which it’s based, the 2007 Mazda Tribute Hybrid is a “full” hybrid – meaning that it can power itself up to 25 mph on the battery pack alone. Thanks to this capability, the owner can creep along in traffic without burning an ounce of fuel or adding an iota of pollution to the atmosphere. Stab the throttle, and the electric propulsion system supplements the 133-horsepower, Atkinson-cycle, 2.3-liter four-cylinder engine under the hood. The result is the thrust of a V6 engine combined with the fuel-economy of a four-cylinder motor. Combine this efficiency with the Tribute’s roomy interior for five adults, good-sized cargo area, and available 4WD system, and you’ve got one of the few all-weather hybrids on the market.

Based on road testing of the Ford Escape Hybrid, we can say that it’s easy to get more than 30 mpg when creeping in traffic, and even when pushed hard up mountainsides and used to shoot into holes in traffic you can get as much as 25 mpg. With prices starting in the high $20,000 range, that’s a decent deal. Look for the 2007 Mazda Tribute Hybrid to arrive this fall. 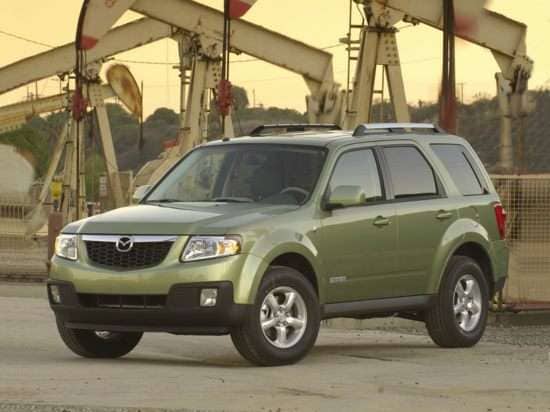