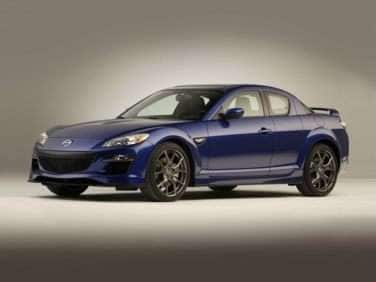 All About Mazda RX-8

The Mazda RX-8 is a four-door, four passenger sport coupe. Mazda is one of the few major automakers to have experimented with the possibilities offered by rotary engines. Rotary engines differ from standard internal combustion engines in that instead of one or more banks of cylinders, power is generated by the ignition of fuel to move a rotor in a chamber. Some of the first Mazda rotary vehicles to gain popular acceptance in North America were the RX-7 sports cars, who used small-displacement engines in combination with low curb weights to keep the fun factor high. After the RX-7 disappeared from the lineup in the mid-1990’s, it was several years before Mazda replaced it with its spiritual successor – the RX-8, which debuted in 2003.

The 2008 Mazda RX-8 is a unique vehicle. The exterior styling, while clearly Mazda, is an in-your-face combination of bulges, fender flares and a long, aggressive looking hood. The RX-8 is a sport coupe with a major leg up on the competition, in that it uses rear-hinged half-doors just behind the front doors in order to make for easy entry into the rear seating area – much like a compact pickup truck. This transforms the RX-8 from frivolous toy to practical primary vehicle, as it is no longer a hassle trying to transport larger objects, children or even full-size adults.

The RX-8 is powered by a 1.3 liter RENESIS rotary engine which generates 232 horsepower and 159 lb-ft of torque when equipped with a 6-speed manual transmission. Power is decreased to 212 horsepower for those who choose to order the 6-speed, paddle-shifted automatic, which is unfortunate. The combination of the performance-oriented suspension system and standard limited-slip rear differential means that the RX-8 is equally at home on both the boulevard and the race track. While not an overpowering weapon to drive, the light weight of the RX-8 helps to keep vehicle response lively, and a 50 / 50 front to rear weight distribution contributes to predictable handling. The rotary engine lacks significant power down low, but more than makes up for it with lightning quick runs up to the redline.

Inside, the four place seating configuration works well, as the rotary engine’s small size allows for its placement in the chassis such that it compliments both performance and interior room. With 4 trim levels, buyers can configure the RX-8 in a number of different fashions, although the base Sport model is well equipped with power everything as well as a leather-wrapped steering wheel and cloth buckets seats. The most luxurious trim level is the Grand Touring which offers automatic climate control, Bluetooth integration and leather seats and door trim. For drivers who are more interested in performance than comfort, a special R3 trim adds Bilstein sport shocks, an aggressive aero treatment and 19-inch forged wheels. It also subtracts some of the vehicle’s luxury equipment.

The 2008 Mazda RX-8 is a rare vehicle indeed, offering sports car acceleration and handling combined with a practical interior and trunk. The exoticism of the rotary engine is also a strong draw for buyers who want to purchase a vehicle designed by those who think outside the box. It is unlikely that RX-8 owners will encounter another vehicle quite like it out on modern roads.

The 2009 Mazda RX-8 has had a few external changes in its design as well as some improvements made to the vehicle’s performance. The lights have been redesigned, as have the front and rear fascias. The wheels have also been changed, with a new distinctive insignia on the wheels. The structural rigidity has been improved on the RX-8. The suspension geometry has been revised and the sixth gear has a shorter ratio.

The front grille us wider and the tail has been reshaped into a more distinctive design. The center stack in the vehicle’s interior has been restyled. There are also several new standard features. Bluetooth capability, a touch screen navigation system and an auxiliary audio jack have all been added in 2009.

There is also a brand new trim level in 2009- the Rx-8 R3. This new trim level is performance oriented, and it comes standard with a plastic-foam-filled chassis cross member, Bilstein dampers, lightweight wheels made from forged aluminum and 19-inch high-performance tires. On the exterior, the R3 has a unique bumper, extended rocker sills, fog lights, a rear spoiler and xenon headlights. The R3 also comes standard with Recaro seats and a 300-watt surround sound audio system by Bose.

There are now four trim levels for the RX-8: the base model Sport, the Touring and Grand Touring trims and the new R3. The base model has 18-inch wheels, air-conditioning, a leather-wrapped shifter, a steering wheel wrapped in leather, a CD player with a six-speaker stereo, power accessories, performance tires and an and auxiliary audio jack. Base models with manual transmission also come with a rear lip spoiler. Touring models also come with fog lights, xenon headlights, a six-CD changer in the dash, a rearview mirror with auto dimming and a limited-slip rear differential. The Grand Touring trim adds automatic headlights, rain-sensing wipers, heated side mirrors and automatic climate control.