We at Autobytel have been fans of the Mazda3, finding it to be a fuel-efficient and fun-to-drive competitor in a class of car known more for staid practicality.  We recently reviewed the mid-level Mazda3 and found it to offer a pleasant combination of class-leading fuel efficiency and above par handling.

We haven’t tested the hotter version of the Mazda3, known appropriately as the Mazdaspeed3, in a while. The current generation of the Mazdaspeed3 was introduced for the 2010 model year (the first became available in 2007).  We have a Mazda3 buyer’s guide to the different model years of the car. Read on to see our impressions of the 2013 Mazda MAZDASPEED3.

For 2013, changes to the Mazdaspeed-tuned version of the Mazda3 are limited to trim and technology.  We still see the same 2.3 Liter MZR direct-injection and turbo-charged engine we’ve come to appreciate in previous iterations.  Producing 263 hp and 280 lb-ft of torque, this is a major step up in straight line performance over the 155 hp SKYACTIV-G model we last drove.  No change was necessary in terms of performance from this engine.  Once again, the only transmission available in a 2013 Mazda Mazdaspeed3 is a close-ratio 6-speed manual transmission.

Externally, the only real change to the car this year is the move to dark “gun metal” finish on the standard 18” alloy wheels.  Between those wheels and our test car’s spectacular metallic Velocity Red Mica paint, it was certainly hard to maintain a low profile.  Love the styling or not, this maximum Mazda3 takes the well-loved “hot hatch” formula up to maximum volume.

The biggest change to the car this year comes inside.  Previous model years only offered a tiny compact navigation screen located in a binnacle above the dashboard.  This year, buyers opting for the $2,485 technology package receive a 5.8” full-color touch screen mounted in the center of the dash.  Here, it is more conveniently located for both driver and front-seat passenger.  The system uses TomTom navigation with voice activation.  We also found it simple to synch our iPhone for use with the Bluetooth calling and audio streaming.  The system has a built in Pandora application which can also use your mobile device wirelessly or though the USB port in the center console.  It will also allow one to handle SMS messages in a hands-free manner, though we didn’t try this ourselves.  Let’s just say our attention was on the road in front of us.

There is nothing particularly revolutionary with the screen, Mazda’s is actually a bit smaller than those available in some competitors.  What is particularly well done, however, is the interface.  Many often-used controls like tuning, volume, and climate control settings are still manipulated through large and well-marked knobs.  Technology can be fantastic, but we never appreciated having to scroll through three screens in order to change a setting previously one click away.  Mazda’s approach is simple and, we believe, safer as one doesn’t need to remove his or her hands from the wheel and eyes from the road.   And, given the performance of the Mazdaspeed3, this is where they should remain.

The turbocharged engine is powerful at all times but particularly so in the middle of its power band.  Mountain roads could often be handled by leaving the car in third or fourth gear.  The incredible pull from the engine combined with fantastic handling just made extralegal speeds seem easy… or so we hear.  Freeway acceleration was effortless and didn’t require a downshift from sixth gear even at moderate speeds.  The power from this engine is just phenomenal.

On paper, the 0-60 times of the Mazdaspeed3 (reported to be in the mid 6 second range) don’t seem quite so mind-blowing, but there are a couple of mechanical explanations.  First, Mazda chose to reduce torque output in first and second gears to combat torque steer.  This is the tendency of powerful front-wheel-drive cars to want to pull to one side under heavy applications of the throttle.  Second, the close-ratio transmission requires an extra shift before reaching 60 mph, thus affecting the time.  We say this is mostly just academic.  In real world driving, this car simply has an abundance of power.

performance cars sometimes ask for a lot of compromise in ride quality in exchange for ultimate cornering power  In this case, Mazda has negotiated the balance between ride and handling quite well.  The Mazdaspeed3 is noticeably more firmly sprung than the base car but it isn’t harsh.  There is plenty of suspension travel left to absorb bumps on the daily commute.  For those interested in ultimate performance, it’s also worth noting that rough pavement mid-corner when driving hard didn’t upset the car.  A favorite local freeway onramp can often unsettle test cars with its poorly placed potholes.  The Mazda3 stayed on course and seemed to shrug off the bumps.  The sticky 18” tires contribute to the car’s roadholding, but we do wish they were a bit quieter at speed… though this is a common issue with larger performance rubber.

There is one big compromise, and that’s in fuel economy.  As Mazda has introduced their SKYACTIV fuel-efficiency designs to the rest of their lineup (including the optional engine on the Mazda3) the EPA ratings of the Mazdaspeed3 seem even worse in comparison.  18 mpg city and 25 mpg highway using premium fuel are a far cry from the 27/39 available in the SKYACTIVE-G equipped Mazda3 with a manual transmission.  We averaged around 22 mpg during our week of mixed driving.  So, there is a cost to all of that performance.

So ... what to make of a car like the 2013 Mazda Mazdaspeed3?  Here we have a practical 5-door compact car.  It’s still easy to live with daily.  It’s comfortable, can serve a small family’s needs, can handle trips to the local warehouse clubs with a large cargo area and even offers a compelling mix of updated technology.  It also happens to be a road burning sports car that will have its driver grinning from ear to ear.  It is a reminder of why we fell in love with the idea of a hot hatchback in the first place. 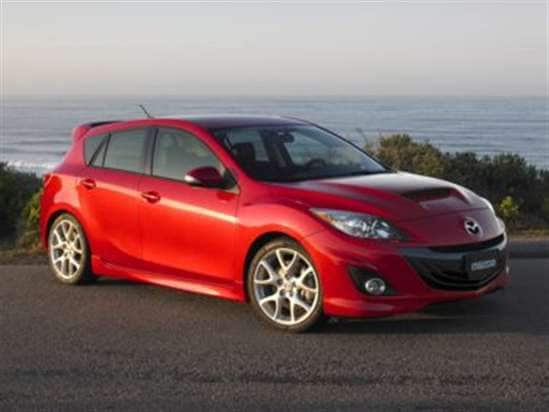