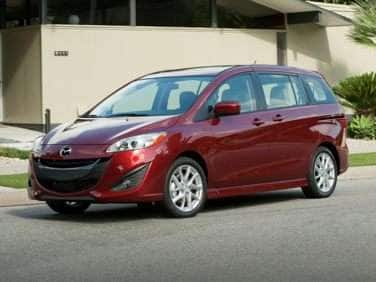 All About Mazda MAZDA5

The Mazda MAZDA5 is a four-door, six passenger compact minivan. Mazda has long been careful to protect their sporty image in North America, making sure that each of the vehicles that they offer has at least some sort of engaging driving experience or spirit. When it came to minivans, Mazda faced a difficult decision. Their Premacy minivan had been sold outside of the U.S. since its introduction in 1999, but the company decided that in order to bring it to the North American market it would have to undergo a re-design that allowed them to position it more as a sport wagon than a van. The result was the MAZDA5, which has been available since 2005.

The 2008 MAZDA5 has been updated in order to improve the exterior appearance as well as alter some of the mechanical elements of the vehicle. In terms of style, the vehicle bears the upright stance of a minivan but does make some concessions to station-wagon design with its low ride-height. Whereas the Premacy was a seven-seater, the MAZDA5 provides place for six passengers to make better use of the slightly smaller dimensions.

There is only engine and transmission combination available for the MAZDA5. The minivan uses a 2.3 liter, 4-cylinder engine that produces 153 horsepower and 148 lb-ft of torque. This motor is mated to a 5-speed automatic transmission that provides a manual mode for those van drivers who wish there were driving a sports car. Around town the 2.3 liter provides enough power to make the MAZDA5 feel responsive, but when the vehicle is loaded down with passengers or cargo the small engine can sometimes seem overworked. The suspension is up to the task of carrying a heavy load, but it’s not quite on par with a sport sedan, meaning that care must be taken when piloting a full-laden van along twisty roads.

Inside the van, space is adequate, but seating arrangements leave something to be desired, with the third row being predictably cramped for adult passengers. The van is easy to get in and out of thanks to its low ride height, although once again third-row passengers have to make their way past a tilted second row seat and through a narrow passage to get to their destination. With the rear seat folded, interior storage is competitive with some of the stalwarts in the segment. Interior materials on the whole feel adequate, but no one will mistake the MAZDA5 for being a premium vehicle of any type.

That being said, the MAZDA5 is meant to score points based more on the fact that it is a compact van with good passenger capacity, rather than a bloated luxury people mover. The van is targeted towards people who are able to convince themselves that a MAZDA5 presents less of a slight to their driving sensibilities than a large van would. With excellent fuel mileage of 22 miles per gallon in town and 28 during highway driving, the MAZDA5 makes for economical family transportation the won’t break the bank and is also easy to slip into a narrow parking spot.

The 2009 MAZDA5 has had only a few changes of color since the 2008 model year. The 2009 models have the option of a new sand color on the interior and a new silver color for the exterior. The rest of the vehicle remains unchanged.

There are three trim levels available for the MAZDA5- the base Sport trim and the Touring and Grand Touring trims. The base model comes with 17-inch wheels made from alloy, power accessories, second and third row seats that fold flat, automatic climate control, a steering wheel that tilts and telescopes, a CD player, six speakers, an auxiliary audio jack, electroluminescent gauges, cruise control, air-conditioning in the rear with rear controls and vents, a trip computer and audio controls integrated into the steering wheel as standard features.

The Touring trim level also comes with a shift knob wrapped in leather, a rear spoiler, a six-CD changer that’s in the dashboard, fog lights, a sunroof and a steering wheel wrapped in leather. The six-CD changer is offered as an option on the Sport trim. The Grand Touring trim level adds several luxury features to the MAZDA5. This trim features rain-sensing windshield wipers, Bluetooth capability, xenon headlights, heated front seats and leather upholstery.

Both the Grand touring and the Touring trim levels have an optional navigation system with a touch screen. All MAZDA5 models come equipped with safety features such as side curtain airbags for all three rows and four-wheel antilock disc brakes.