Mazda may be better known for its lovable MX-5 Miata sports car or its impressive lineup of SUVs, but the Mazda3 is in many ways the automaker's best offering — its least expensive and most fuel-efficient product. It’s also the best-selling Mazda in the world, with more than five million Mazda3 vehicles sold since 2004.

The 2018 Mazda3 compact car is available as a four-door sedan or a sexy and versatile five-door hatchback. It’s one of the most fun-to-drive cars in the extremely competitive compact class, and with its EPA-rated 37 mpg on the highway, it’s quite fuel-efficient. Now in its third generation, the popular Mazda3 also wins acclaim for its high-quality interior and inspired style. It competes with the Honda Civic, Toyota Corolla, Hyundai Elantra, Kia Forte, Chevrolet Cruze, Ford Focus, Subaru Impreza and Volkswagen Golf and Jetta.

Mazda builds the Mazda3 in Japan and keeps the number of variations and trim levels simple. Both the 2018 Mazda3 sedan and hatchback are available in three trim levels: Sport, Touring and Grand Touring. Like all competitors except the Subaru Impreza and Volkswagen Golf Sportwagen, every Mazda3 is front-wheel drive. In this segment. Sport models get a 155-horsepower 2.0-liter four-cylinder. Touring and Grand Touring models come standard with a 2.5-liter four-cylinder with 184 hp. Both engines work with either a six-speed manual transmission or a far more popular six-speed automatic.

A Blast to Drive

A Blast to Drive

There are faster and more powerful cars in this segment, but the 2018 Mazda3 is one of the most fun. It boasts responsive controls, athletic handling and a solid, substantial feel that keeps it from feeling cheap or tinny. Around town, it feels agile and easy to maneuver, while out on the highway it’s smooth and composed. Although our Grand Touring test vehicle wasn’t exactly a rocket ship, it was plenty quick with the 2.5-liter four-cylinder and the responsive six-speed automatic transmission. Accelerating from 0-60 mph takes less than seven seconds.

Balance and handling are exceptional, especially when equipped with the larger 18-inch tires. The Mazda3’s soft brake pedal action was disappointing, but its steering is among the best in the segment. All trims offer a Sport mode, activated with a button on the console next to the shifter. It dials up the engine’s throttle response and the automatic transmission’s shift points. The changes are subtle but appreciated when you’re in the mood for a little extra performance.

Fuel economy is also very good for this class. With the 2.0-liter four-cylinder engine and the automatic transmission, the Mazda3 Sport is rated for 28 mpg city and 37 mpg on the highway. Touring and Grand Touring models with the larger 2.5-liter offer significantly greater power with a minuscule sacrifice in fuel economy — just 1 mpg in EPA testing. I averaged 30 mpg during a week of mixed driving.

Parents with small children will appreciate the Mazda’s easy-to-reach LATCH connectors in the outboard seats and three easily accessed upper tether anchors. The Mazda3 has also has received the highest crash test ratings: a five-star overall score from the National Highway Traffic Safety Administration and a Top Safety Pick+ designation from the Insurance Institute for Highway Safety.

For 2018, a rearview camera and Mazda’s Smart City Brake Support system are now standard on all Mazda3 trims. During emergency situations at speeds between 2 and 19 mph, the system automatically applies the brakes to avoid a collision or lessen its severity. Another clever system included on every Mazda3 is clumsily called G-Vectoring Control, which makes it sound like something out of a James Bond movie. The system helps the vehicle's stability by reducing the engine’s torque in an instant to help the car’s front tires grip the road. Incredibly, the software operates without attracting notice from the driver.

Blind-spot monitoring and a rear cross-traffic alert are now standard on Touring and Grand Touring models. The Grand Touring also adds lane-keep assist, which makes minor steering corrections to keep the car in its lane; and smart brake support, which will apply the brakes for you in emergency situations at highway speeds. Our test vehicle was also equipped with radar-based cruise control and a lane-departure warning system.

Overall, the interior of the 2018 Mazda3 is one of the most appealing in the compact car class. It’s beautifully assembled and packed with quality materials. The design is modern but simple, and our test vehicle's leather seats felt great even after several hours of continuous highway driving. The gauge cluster is sports-car cool, with a large center-mounted tachometer and a smaller digital speedometer.

Four adults fit comfortably in the Mazda3, or five in a pinch. Rear seat space is about typical for this segment, which means headroom is tight if you’re more than 6 feet tall. The Honda Civic offers much more rear legroom, and the Mazda lacks rear air-conditioning vents.

The 2018 Mazda3 sedan offers 12.4 cubic feet of trunk space, which is small for this class, although every Mazda3 does come standard with a 60/40 split-folding rear seat to boost capacity. Still, if cargo volume is a priority, go for the spacious hatchback. It offers over 20 cubic feet behind the rear seat and over 47 cubic feet with the rear seat folded flat. That’s about the same space available in a five-door Honda Civic or Chevy Cruze.

Storage inside the Mazda’s interior is also generous and well thought out. The center console bin isn’t huge, but it’s deep. There’s another sizable bin ahead of the shifter, and the door pockets are large and have slots for water bottles. The two front cupholders are well-sized and accommodate mugs with handles, and they can be covered when not in use. The cupholders are also well-placed behind the shifter, so tall drinks don’t interfere with any of the controls.

In the center of the Mazda’s dash is a 7-inch screen that acts as a touchscreen when the vehicle is stationary. When it’s moving down the road, the infotainment system is controlled by a large knob on the console behind the shifter. The interface is much like you’ll find in a BMW or Mercedes-Benz, but Mazda would be better off making the screen touch-sensitive at all times.

Bluetooth is standard, but unfortunately the system is not compatible with Apple CarPlay or Android Auto and onboard WiFi is not available. Also, the navigation system’s graphics seem dated, although it’s easy to input an address if the car is parked. Our test car also had a head-up display, which projects the speedometer and other information on the windshield in the driver's line of vision.

Overall, this is the best looking Mazda3 ever, and our Soul Red Metallic hatchback was a real head-turner. With a taut curvaceous body and a muscular wide stance, the Mazda3 is one of the better-styled sedans in the compact class, but the hatchback is even sexier.

Although both models are identical from the front doors forward, the hatchback’s front end appears longer and leaner. The hatchback’s proportions are perfect, and the forward cant of its C-pillar visually lowers its roofline for a hunkered-down hot-rod appearance. Up front is a large upright grille surrounded by an artistically chiseled strip of aluminum trim. Somehow, its squinted headlamps appear lifelike. Well done.

It’s easy to recommend the 2018 Mazda3. This little car checks all the boxes. It’s perfect for first-time buyers or parents with young children looking for a practical, safe and fuel-efficient small car. And it’s so fun to drive that even car enthusiasts will love it.

No, it’s not the most powerful small car out there. Some of the Mazda3’s competitors offer turbocharged engines with over 200 hp. Also, some may find the Mazda’s infotainment to be a bit dated compared to other compact models. But the Mazda3 makes up for those shortcomings with class-leading dynamics and one of the finest interiors in the segment.

If you’re looking for a quiet, comfortable and efficient compact sedan or hatchback with an opulent cabin and an entertaining personality, the 2018 Mazda3 is a very desirable overall choice. 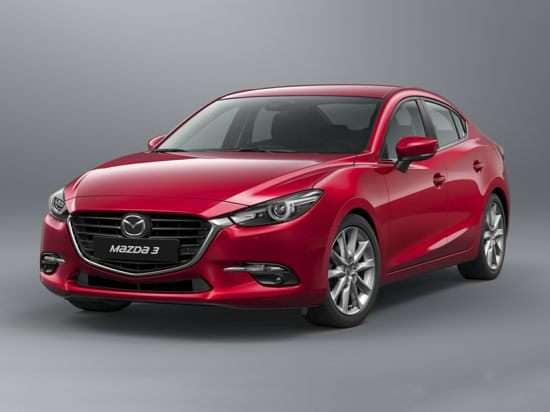