The completely-redesigned 2014 Mazda Mazda3 3i Touring hatchback perfectly illustrates why, in the world of compact cars, if you stop moving forward even for a second, you're dead.  The idea that a tiny company like Mazda could muster up the resources to create what is essentially a perfect, technologically-advanced entry-level car - and then charge a reasonable price for the privilege of owning one - must have been a shocking one for giants like Ford, General Motors, and Volkswagen, each of whom have also revamped their compact hatches in recent years.  If little Mazda can do it, and do it so well, then there's really no reason for potential customers to tolerate a lackluster effort from organizations with billions more in the bank.

It might sound like hyperbole, but hear me out: over the course of this review it will become clear that the 2014 Mazda Mazda3 hatchback is one of the best compact vehicles money can buy, and one that's deserving of your full attention in a universe swirling with Golfs, Sonics, and Focuses.  Parity has arrived on the small car scene, and the Mazda3 is what it looks like.

The 2014 Mazda Mazda3 hatchback is offered in five different trim levels which are divided along the lines of which four-cylinder engine is found under the car's hood.  Those that feature the base motor begin with the prefix 3i, while the upgraded models are denoted by the 3s designation.  There's also a sedan version of the Mazda3 available that largely mimics the hatchback's equipment (with the exception of a value-oriented entry-level SV trim)

The base Mazda3 3i Sport hatchback (MSRP $18,945)comes with features such as Bluetooth connectivity, a CD player, cruise control, power windows and door locks, 16-inch steel wheels, air conditioning, an adjustable driver's seat, and a folding rear seat, while the 3i Touring model (MSRP $20,095) piles on a rear spoiler, heated side mirrors, 16-inch alloy rims, a leather-wrapped steering wheel, grippy front sport seats, keyless ignition and entry, and a blind spot monitoring system.  The 3i Grand Touring (MSRP $23,245) provides a navigation system that makes use of a seven-inch LCD touchscreen paired with a rotary knob on the center console (the 'Commander' in Mazda nomenclature), a sunroof, dual automatic climate control, a surround sound audio system, Internet radio, imitation leather seats with heaters up front, and a rearview camera.

The previous-generation edition of the Mazda Mazda3 featured exterior styling that polarized small car fans between those who appreciated its active, curvy lines and those who couldn't get past the 'smiley' aspect of its front grille.  Both camps are likely to be more pleased with the 2014 model which implements Mazda's new 'Kodo' design language on its smallest palette yet.  Previously seen on the mid-size Mazda6, the Mazda3's bolder lines are less overtly friendly than in the past, projecting an image of strength without becoming garish or imposing.  It's not quite as stunningly executed as on the larger car, but it's definitely one of the better-looking hatchbacks available at the entry level.

The cabin of the 2014 Mazda Mazda3 has also been thoroughly revamped, and regardless of which trim level you end up sampling it’s virtually assured that you'll be impressed by the care that has been taken in assembling the car's passenger compartment.  The dashboard, the center console, the door panels, and armrests all feel like an integral part of the Mazda3 experience, and materials are softer and better looking than one would expect in such an affordable car.

The 2014 Mazda Mazda3 3i Touring hatchback is sold as a compact car but it's big in two important ways: cargo room and passenger space.  The former checks in at 47.1 cubic feet with the rear seats folded forward, and 20.2 cubic feet with a full load of riders, figures that compare well with rivals like the Ford Focus hatchback and the Subaru Impreza hatchback.  Rear seat riders will also notice an improvement in rear legroom and shoulder room made possible by the lengthening of the Mazda3's wheelbase as well as the widening of its platform.

The vehicle I drove featured cloth seats that did a good job of gripping my body without fatiguing my back or legs.  My one complaint about the Mazda3's utility had to do with the available cargo organizer hanging from the hatch when open: it eats up a lot of cargo room and is of questionable practicality as it blocks much of the hatchback's rear opening.  Skip this feature if it appears somewhere on your ordering sheet.

The 2014 Mazda Mazda3 3i Touring hatchback that I drove featured the automaker's new LCD touchscreen navigation and infotainment/communications system that is paired with something Mazda is calling the 'Commander' dial on the center console.  The 'Commander' allows you to interact with the screen's menus and features by way of twisting a rotary controller that is bordered by several buttons that serve as shortcuts to regularly-used features.  The arrangement works quite well - in fact, better than similar setups like COMAND from Mercedes-Benz - due to simple on-screen logic and the ability to switch to using the touchscreen for more complex tasks such as entering an address into the navigation system.

In general, Bluetooth connectivity with my Android phone also went smoothly, with the exception of the car's text message reading system.  Every time I received a text, I was asked by the car whether I wanted to ignore it or read it.  If I selected 'Read,' nothing happened.  If I went to the list of all recent texts received by my phone - which took forever to load - I was unable to see anything other than who had sent the texts, and when, presented in a single-line format.

Almost everything else about the Mazda Mazda3's feature set functioned as advertised, with useful buttons and dials in place for the stereo controls (including a volume knob on the center console) and climate controls.  The vehicle's speedometer is big and easy to read, but Mazda elected to give the car an analog speedo and a digital tach instead of the vice-versa setup offered by most other competitors.  The end result is a tiny, cheap-looking LCD tach buried to the bottom left of the gauge cluster that wasn't all that useful to me while driving.

Every version of the 2014 Mazda Mazda3 hatchback comes with side curtain airbags, dual forward airbags, front side airbags, and electronic traction control and stability control.  As with the 2013 edition it's possible to order a version of the Mazda3 with a blind-spot monitoring system (augmented by a rear cross-traffic alert system), but more important is the addition of a lane departure warning system and a forward collision warning system with automatic braking that are optional on the top-tier 3s Grand Touring trim.  These kinds of features are increasingly common in the compact segment, and it's nice to see Mazda keeping up with the Joneses in the safety department.

2014 Mazda Mazda3 3i Touring Hatchback Crash-Test Ratings:  The 2014 Mazda Mazda3 enjoyed Top Safety Pick status from the IIHS after scoring Good in each of its important crash tests, while the NHTSA awards the car a five-star overall crash safety rating.

The 2014 Mazda Mazda3 loses last year's 2.0-liter base engine in favor of a massaged version of 2013's Skyactiv 2.0-liter four-cylinder for all 3i trim levels.  This means that even the least expensive edition of the Mazda3 now features the twin benefits of decent power and excellent fuel mileage.  The Skyactiv 2.0-liter is good for 155 ponies and 150 lb-ft of torque, with the latter figure representing a couple of extra lb-ft compared to the previous iteration of this mill.  Fuel mileage for the unit is listed at 30-mpg city and 41-mpg highway when paired with the car's available six-speed automatic transmission, with a slightly less robust figure attached to the six-speed manual version of the car (which is what I drove).

The Mazda3 is also available with a new 2.5-liter Skyactiv four-cylinder that not only outperforms 2013's weaker, similarly-sized engine, but also offers near-identical fuel mileage when compared to its smaller 2.0-liter sibling.  184 horsepower and 185 lb-ft of torque are on tap from the 2.5-liter motor, along with 28-mpg city and 39-mpg highway (and the six-speed auto is standard).

As good as the 2014 Mazda Mazda3 3i Touring looks, as premium as its well-executed cockpit feels, it turns out that the car's ace in the hole is what happens once you're behind the wheel.  It shouldn't be so surprising to pilot an affordably-priced compact car that's so willing to match your enthusiasm for driving with a responsive chassis, communicative steering, and well-balanced throttle response, but it is, and the new Mazda3 is one of the best out there.  Simply point the hatchback in the direction you want to go and the car obediently sets sail with nary a complaint of understeer not the bucking of an under-damped rear axle.  It's a refreshing change from the appliance-like nature of vehicles like the Toyota Matrix or the competent, but uninspired handling of the Hyundai Elantra GT.

Complementing the Mazda Mazda3's well-tuned suspension system is ride comfort that never becomes jarring no matter how poorly-maintained the roads might be. Yes, there's more road noise inside the cabin than one might encounter with other compacts, but overall it’s a pleasant experience that doesn't suggest you're riding along in car that's as sporty as the Mazda3 actually is.  Daring to make the daily commute interesting has long been a commendable Mazda trait, and this hatchback fully realizes the potential of the automaker's chassis wizardry.

I mentioned the car's throttle response in the opening paragraph of this section and that's because not only has torque been increased for 2014, but it’s been shuffled around the Skyactiv engine's powerband to provide a mid-range boost.  This helps significantly around town, and the car's six-speed manual felt well-matched to the 2.0-liter's output.  On the highway I could even comfortably up-shift to sixth at slow cruising speeds and reap the benefits of enhanced efficiency without worrying about the Mazda3 stalling out.  I legitimately felt like I was driving the Mazda Mazda3 rather than simply sitting in the front seat waiting for my destination to arrive, and that's a level of engagement that's sorely lacking in modern automobiles of the affordable persuasion.

The 2014 Mazda Mazda3 3i Touring hatchback is the perfect commuter / family option for small car fans sick of being numbed to death by the broad spectrum of compact vehicles starting at under $20,000.  Although it's not the only lively hatch to be found in its segment - vehicles like the Ford Focus and the VW Golf spring to mind - it's certainly of a rarer breed than your typical A to B econo-car.  Add the Mazda3's impressive fuel efficiency and premium-feel cabin to the equation and you end up with a vehicle that deserves to be a major player at the entry level.

Mazda Canada supplied the vehicle for this review. 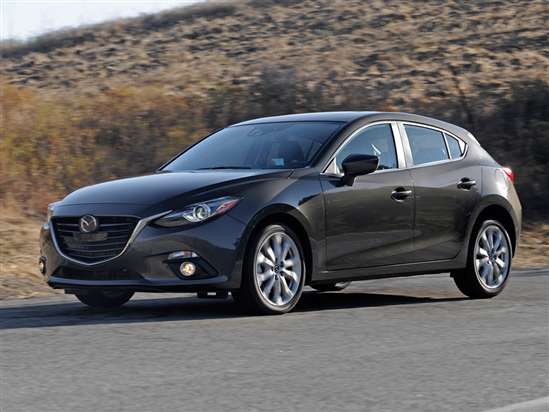