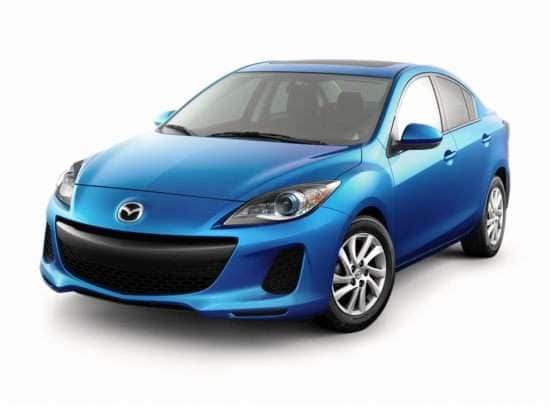 Mazda makes numerous changes to the 2013 Mazda 3. Chief among them are the expansion of the fuel-efficient SkyActiv 4-cylinder engine to additional versions of the car, and the installation of a new color touchscreen infotainment system with SMS text messaging capability, e911 emergency services, and Pandora Internet radio. All models gain additional standard equipment for 2013, and Mazda has cancelled the 3s Touring trim level.

The 2013 Mazda 3 is sold as a 4-door sedan or a 5-door hatchback. The base Mazda 3i SV Sedan is equipped with air conditioning, power windows, a tilt/telescopic steering wheel, and an auxiliary audio input jack. Options include an automatic transmission and a Convenience Package with power door locks and remote keyless entry.

The Mazda 3i Sport Sedan includes the Convenience Package and adds a SkyActiv-G engine, cruise control, a USB port, and a trip computer.

A 2.0-liter 4-cylinder engine making 144-148 horsepower is standard in the Mazda 3i SV, matched to a 5-speed manual gearbox or a 5-speed automatic.

The Mazda 3s gets a 2.5-liter 4-cylinder engine making 165-167 horsepower. A 6-speed manual gearbox is standard and a 5-speed automatic is optional.

A 155-horsepower, 2.0-liter SkyActiv-G 4-cylinder engine powers all other models, and is paired with a 6-speed manual or 6-speed automatic.

Fuel economy ranges between 20 mpg in the city for a Mazda 3s with a manual transmission, and 40 mpg on the highway for the SkyActiv-G engine with an automatic transmission.

Though named a “Top Safety Pick” by the IIHS, the Mazda 3 does not perform well in NHTSA side-impact crash tests. It receives an overall rating of 4 stars, but side-impact protection rates 3 stars due to a 2-star rear-passenger rating and a 3-star side-impact pole test rating.