The Mazda3 5-Door is a sporty and economical compact hatchback that is available in “i” and “s” models.  The first is powered by Mazda’s SKYACTIVE 2.0 Liter four cylinder making 155 HP that gets an estimated 28 MPG around town and as much as 39 MPG at cruising speeds, while the rest get the 167 HP 2.5 Liter four banger which trades a little more pep for a few more trips to the pump, coming in at an estimated 22 MPG City and 29 MPG Highway.

The Japanese automaker offers the Mazda3 hatch in two different trim levels, the base i Touring version starts at $18,950 and the i Grand Touring goes for $22,800 while the s Grand Touring (there is no s Touring) gets a set of 17 inch rims and will set you back $23,400 worth of zoom-zoom.  While the s gets a set of 17 inch wheels, one inch bigger than the rest, and all Grand Touring models come with a power sliding moon roof with one touch operation and a 10 speaker Bose Centerpoint Surround Sound system complete with in dash CD/MP3 player, standard.  However the high intensity discharge headlights are an option for all Grand Touring models.

Mazda also sells the 3 in the form of a four door compact sedan as well as a turbocharged high performance sport hatch under the MazdaSpeed banner.  The Mazda3 was also named a Top Safety Pick according to the Insurance Institute for Highway Safety. 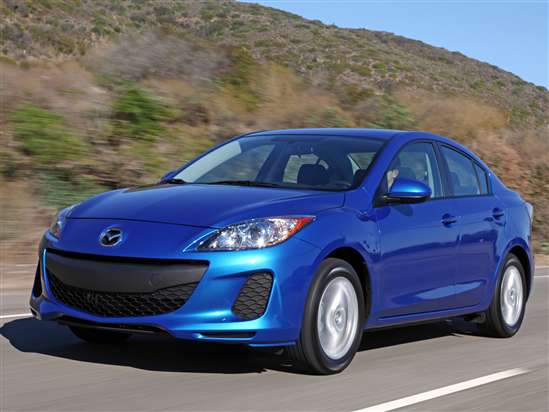