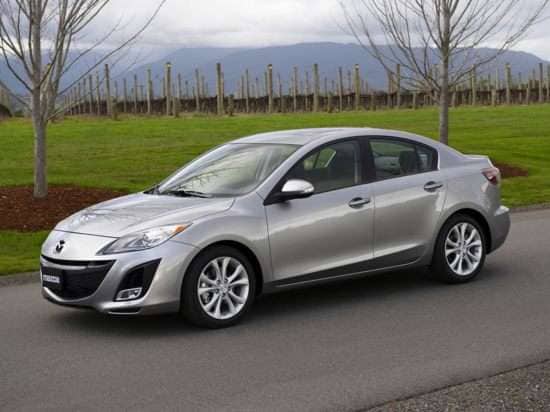 As one of the most popular compact cars currently on the market, Mazda will be redesigning the sedan and hatchback version of the MAZDA3 for 2010. After redesigning the rest of its entire lineup (other than the B-Series), Mazda’s moneymaker finally gets its turn. As original as the original 3 was when it launched in 2004, the 2010 Mazda MAZDA3 has improved on its predecessor in just about every aspect. Going up against the likes of the Ford Focus, Toyota Corolla and Honda Civic is never an easy task, but with a sportier look, luxurious interior and more powerful engines, Mazda certainly gave its all-new 2010 MAZDA3 a fighting chance.

Like the original MAZDA3, the 2010 model will continue to be available as either a sedan or a five-door hatchback. Besides the cartoonishly large grin evoked from the grille opening, the new 3 borrows heavily from the new design cues of the larger MAZDA6. Up front, the large bulging wheel wells are easily recognizable across Mazda’s lineup, while the large, diamond-shaped headlights and side air vents emphasize the car’s sporty image. From the rear, larger taillights improve visibility but continue the previous car’s styling with clear lenses. Even the decklid has a hint of “Bangle Butt” made infamous on the majority BMW cars. From front to back, the car’s design is anything but ground breaking (especially for Mazda) but it should be more than enough to stand out from its main competitors. An option usually reserved for much more expensive vehicles, the MAZDA3 in Grand Touring trim level gets Adaptive Front Lighting with self-leveling, Bi-Xenon headlamps among the long list of standard features.

The cabin of the new MAZDA3 gets an equally impressive overhaul and now features a fair share of options and accessories uncommon in the entry-level price segment. The relatively flat surfaces of the current model’s instrument panel are replaced by a wave-like design that incorporates the gauge cluster and the information display. While the old 3 had a pop up navigation screen mounted atop the instrument panel, the 2010 model features an integrated screen to the left of Mazda’s orange-glowing, digital multipurpose display.

Under the hood, the base model MAZDA3 i comes with a 2.0-liter inline-4 with an output of 148 horsepower and 135 lb-ft of torque. The sportier MAZDA3 s gets a slightly detuned version of the MAZDA6’s 2.5-liter inline-4 putting out 167 horsepower and 168 lb-ft of torque. For increased performance, and added visual appeal, the MAZDA3 s gets a pair of chrome-tipped exhaust outlets (the MAZDA3 i only gets a single exhaust outlet.

As expected from any vehicle in its segment, the new 3 offers impressive fuel economy that even beats the outgoing model. The current MAZDA3 gets an EPA fuel economy estimated 24 miles per gallon in the city and 32 mpg on the highway with the base engine, while Mazda is expecting the 2010 model to get 25 mpg city and 33 mpg highway. No conversation on a second-generation MAZDA3 would be complete with questioning the future of the MAZDASPEED3. The current MS3’s turbocharged 263-horsepower 2.3-liter direct injected inline-4 would be a definitely welcome addition under the hood of the 2010 MAZDA3.