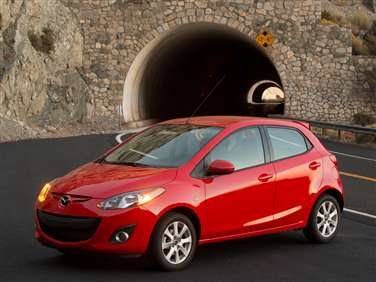 All About Mazda Mazda2

Winner of the 2008 World Car of The Year title right out of the box, the North American version of Mazda’s Mazda2 was introduced at the Los Angles Auto Show in 2009. Essentially replacing the Mazda 323, albeit some 15 years after that model went out of production, Mazda2 is the company’s smallest offering in the United States.

Mazda offers the Mazda2 in two states of trim; the base model is called the “Sport”. Standard equipment includes power windows, mirrors and door locks, along with keyless entry, air-conditioning, and a four-speaker audio system fed by a CD/MP3 stereo head unit with USB and auxiliary audio input jacks. The upgrade is called “Touring” and features alloy wheels, foglights, a leather-wrapped steering wheel, cruise control and two more speakers for the stereo system (six). Navigation, Bluetooth and iPod interfaces are sacrificed to the Gods of low price—you can’t even get them as options.

Cargo capacity is only 13.3 cubic feet with the rear seats in place, and with them folded that figure only goes up to 27.8 cubic feet. Regardless of how you slice it, that’s on the low side, when cars like Honda’s Fit are also in the category rocking north of 57 cubic feet of cargo space.

A 100-horsepower, 1.5-liter inline four-cylinder engine capable of 98 ft-lbs of torque powers the subcompact four-door hatchback. Now before you dismiss the Mazda2 as an underpowered little econobox and click out of this post, keep in mind the little Mazda only weighs 2306 pounds. That said, no, the Mazda2 isn’t blazingly quick, but it is quick enough—keep reading.

Shifting gears yourself, while enjoying the agility, along with the sharp steering for which all Mazda product is well known makes the little Mazda fun to drive. If you’re shopping this category, the Mazda2 will fare best if you consider it a city car—one good primarily for the daily commute and running errands around town. Push it much outside those boundaries though and its shortcomings become a bit too obvious.