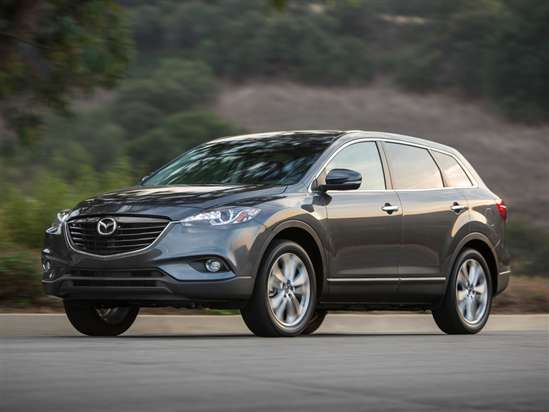 The CX-9 Grand Touring is equipped with 20-inch aluminum wheels, bi-Xenon headlights with automatic operation, LED running lights, and fog lights. The side mirrors have turn signal indicators, and this version of the crossover SUV includes memory for the driver’s settings, a power rear liftgate, keyless entry with push-button starting, rain-sensing wipers, an auto-dimming rearview mirror, and a universal garage door opener.

A 3.7-liter V-6 engine is standard for every 2014 Mazda CX-9, making 273 horsepower that is delivered to the front wheels through a 6-speed automatic transmission. An all-wheel-drive system is optional.

In combined driving, the 2014 CX-9 returns 19 mpg with front-wheel drive, and gets 18 mpg with the optional AWD system.

Structurally, this Mazda is now 8 years old, and the 2014 CX-9 really shows its age when it comes to crash-test ratings. This vehicle simply is not as safe a crossover SUV as its competition.

In tests performed by the National Highway Traffic Safety Adminstration (NHTSA), the CX-9 earns a 4-star overall rating, but frontal-impact protection rates 3 stars for the driver and the front passenger. The CX-9 also gets a 3-star rating in the side-impact pole test.

In the event of an accident, the 2014 Mazda CX-9 model’s standard E911 automatic emergency notification service springs into action as long as a paired smartphone is aboard the vehicle when the airbags deploy. The system helps to speed rescuers to the scene of the collision. Additionally, Mazda offers key safety features designed to help a CX-9 driver avoid an accident in the first place. They’re standard for the Touring and Grand Touring models, and include a reversing camera, rear parking sensors, a Blind Spot Monitoring system, and a new-for-2014 Rear Cross Traffic Alert system.