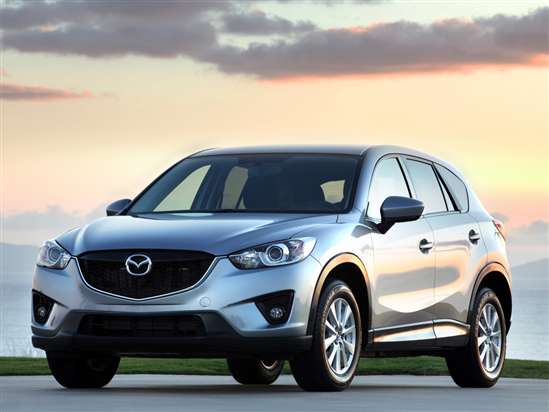 The standard engine in the 2015 Mazda CX-5 Sport is a 2.0-liter 4-cylinder engine employing SkyActiv technology that helps to maximize fuel economy. This engine makes 155 horsepower, is paired with a standard 6-speed manual gearbox or an optional automatic transmission, and is equipped with front-wheel drive. An all-wheel-drive system is optional.

Get the CX-5 Touring or Grand Touring, and this spunky crossover is equipped with a 2.5-liter SkyActiv 4-cylinder engine. It makes 184 horsepower, includes a 6-speed automatic transmission, and delivers the power to the front or all four wheels.

Choose the CX-5 Sport and you can expect to get 29 mpg in combined driving with FWD and either the manual or automatic transmission, or 28 mpg with AWD. Select the more powerful CX-5 Touring or Grand Touring, and those ratings fall to 27 mpg and 26 mpg, respectively.

In crash tests conducted by the NHTSA, the 2015 Mazda CX-5 earns a 5-star overall rating, the SUV receiving the highest possible protection rating in every individual frontal- and side-impact test.

The Insurance Institute for Highway Safety (IIHS) had not rated the 2015 CX-5 as this summary was written, but the structurally identical 2014 version was named a “Top Safety Pick.”

In addition to adding Mazda Advanced Keyless Entry to the 2015 CX-5 Touring and Grand Touring models, these versions of the crossover SUV are equipped with a reversing camera, a blind spot information system, Bluetooth connectivity, text messaging capability, HD Radio, Internet radio, and an E911 Automatic Emergency Notification service that can help speed rescuers to the scene of an accident following a collision. A premium Bose Centerpoint sound system is optional for the Touring model and standard for the Grand Touring model.

Additionally, for the Touring and Grand Touring models, Mazda offers an adaptive front lighting system with bi-Xenon headlights and what the automaker calls a Smart City Brake Support (SCBS) system. The SCBS system works between 2 mph and 18 mph, helping to prevent the CX-5 from striking other vehicles, or to reduce speed prior to impact. So equipped, the CX-5 earns an “Advanced” front crash prevention rating from the IIHS.