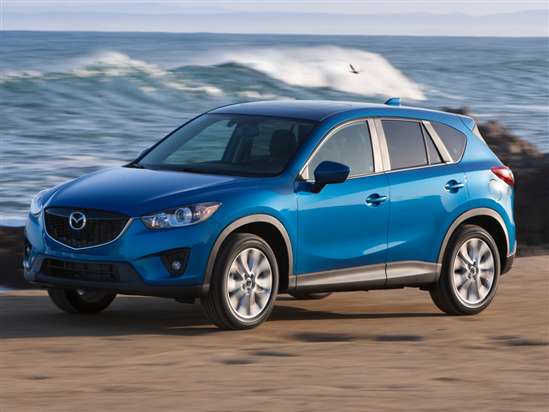 One year after introducing the CX-5 as a replacement for the Tribute compact crossover SUV, Mazda adds a more powerful 2.5-liter SkyActiv 4-cylinder engine for the Touring and Grand Touring versions, expands the availability of infotainment systems, and offers a new Smart City Brake Support system.

The CX-5 Sport is equipped with a 155-horsepower, 2.0-liter 4-cylinder engine that drives the front wheels through a 6-speed manual gearbox. A 6-speed automatic transmission is optional with this engine, and is required if the buyer wants the available all-wheel-drive system.

New for 2014, a 184-horsepower 2.5-liter 4-cylinder engine is standard for the CX-5 Touring and Grand Touring models, paired with a standard 6-speed automatic transmission driving the front wheels. AWD is optional.

According to the EPA, the CX-5 Sport averages 29 mpg in combined driving regardless of transmission choice, even though the stick-shift delivers 35 mpg on the highway compared to 32 mpg for the automatic. Selecting AWD drops the combined rating to 28 mpg.

The CX-5 Touring and Grand Touring are rated to return 27 mpg in combined driving with front-wheel drive and 26 mpg with AWD.

The National Highway Traffic Safety Administration (NHTSA) gives the 2014 CX-5 a 5-star overall crash protection rating, the highest possible score. In tests conducted by the Insurance Institute for Highway Safety (IIHS), the CX-5 receives the highest rating of “Good” in all assessments except for the tough new small overlap frontal impact test, for which the SUV rates “Marginal.”

A Bluetooth Audio Package is optional for the CX-5 Sport, adding a touchscreen infotainment system with HD Radio, Pandora Internet radio, Bluetooth hands-free calling and text-messaging capabilities, and Mazda’s E911 service. The E911 service automatically contacts an emergency operator if the SUV’s airbags deploy, helping to speed rescuers to the scene of the accident. These features are standard on Touring and Grand Touring models.

Additionally, the 2014 CX-5 Touring and Grand Touring are equipped with a blind-spot information system, and these models can be upgraded with adaptive headlights that swivel to help the driver see around dark corners. A new Smart City Brake Support system is also offered for the Touring and Grand Touring, technology that detects obstacles ahead and can automatically apply the brakes if the driver fails to act, but only when the CX-5 is moving at 19 mph or less.